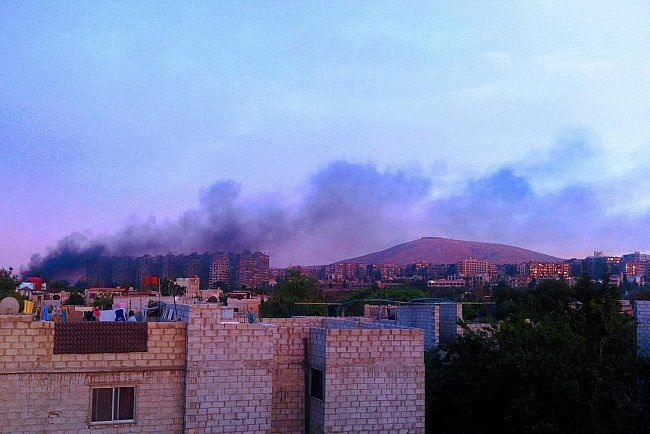 Abu Qusay: portrait of a fighter

Abu Qusay used to work as a tailor and a carpenter in his hometown of al-Ghizlaniya before the start of the revolution. When the tailoring business was slow, the heavy-set, burly 33-year-old would occupy himself with carpentry, and vice versa. Abu Qusay earned between 15,000 and 20,000 Syrian pounds on average per month. This was his family’s only source of income and it was barely enough money for a family with 4 young children, but as Abu Qusay would say “God will provide”.

When the revolution erupted in Tunisia, I was hoping it would come here. We want to change the government, the regime, and everything that we have to put up with for the better. The state is corrupt and so are its components; its employees, its officers, and its judges. Bashar sits on top of the pyramid of authority and therefore holds full responsibility for the situation and for his regime’s transgressions.

I had a dream once – before the revolution – that I was in Damascus, chanting against the regime.

Then, when the revolution started here, I actually took part in the first demonstration to come out from the Umayyad Mosque. We chanted “Freedom! Freedom!”, but we failed. They beat us with their batons and they made us bleed.

We demonstrated again a week later. This time the demonstration was big; there was about 800 or a thousand of us. State-security officers were scattered in small groups, so they were unable to break up our protest. We reached as far as Marjeh Square. There was a young protestor among us who held up a Qur’an with one hand, and a cross with the other. We then chanted “Freedom! Freedom! Muslims and Christians”.

After that we started to take part in the demonstrations in Douma. We were a group of young men who came from the neighbouring areas; al-Ghizlaniya, Zamalka, and Ghouta. None of us had ever been politically active before. We reprimanded those in the demonstrations who threw a rock or carried a knife, and we warned them that this is exactly what the regime wants us to do!

We tried again to organise demonstrations in Damascus. We focussed on the suburb of al-Midan. We congregated daily in the suburb’s mosques and started our demonstrations from there; there was al-Hasan mosque, al-Mansour mosque, al-Majed mosque, al-Daqqaq mosque… We came out of the mosques because it was difficult to assemble in the streets, and so this became the norm.

Following Ramadan and the massive protests in Hama (the regime had killed many people by then), we established the “Abu Ubaidah ibn al-Jarrah Battalion” in total secrecy. The members of this battalion came from all over the Ghouta agricultural belt; Douma, Saqba, Jisrin, Hammurya, Rankus, al-Ghizlaniya… The battalion’s leader was Abu Muhammad, a Kurd and a retired colonel from Rukn al-Din.

Our missions were quite light-weight. Fundamentally, our role was to protect demonstrators. We know that people would come out in bigger numbers if they knew that they were protected. We used to maintain our distance from the demonstrations, and would only strike the state-security forces if they tried to attack the demonstrators.

In November 2011, on the first day of Eid al-Adha, we attacked a border-security battalion in Rankus and secured a decent amount of materiel; rocket launchers, carbines, assault rifles, ammunition… we then returned to Douma and carried out an attack on a Shabiha headquarters. We did the same in Saqba and Hammurya.

At this point, our battalion grew and there was more than 200 of us, so Abu Khalid al-Ghizlany and I decided to form an independent company in Deir al-‘Asafir. We separated from our original battalion, but only to relieve them administratively. There was no conflict between us, on the contrary, we are still in co-operation; it was just that we needed to expand.

We began to strike state-security convoys and police stations, and kidnapped security officers on the airport road. We also targeted regime battalions and checkpoints; for example, we struck the checkpoint in Jisrin on a number of occasions. We would hit-and-run;resist for a short while but then retreat. Back then, we had no anti-tank missiles or enough ammunition, and were unable to seize control of territory.

We received financial aid from Syrians living in Syria and spent this on guns.

We struck ‘Ain al-Tineh Battalion in Deir al-‘Asafir and were able to seize hand grenades and an anti-aircraft cannon. We also attacked a battalion in Nawla and seized its weapons.

We had no other choice than to do this. We did not expect that any of this would happen. However, this is a war that was imposed on us and we have to finish what we started. What concerns us today is to end the conflict and minimise loss of human life and historic buildings. After all, this is our country. Oh how I wish we could end all of this today!

But we do not trust the regime; neither its proposals nor its promises, and we will never accept them.

We established the “Battalions of the Mothers of Believers” in the Spring of 2012, a company that protects Mlaiha, Deir al-‘Asafir, Hteitet al-Turkman, Shab’a, and al-Ghizlaniya. There was about 300 of us, most in their 20s and 30s but we had a few men younger than 20. Amongst us there were some defected privates, but no officers. No defected officers joined us; they either went back to their hometowns, or left the country to Jordan or Turkey. They fear for their lives and think that the regime will survive and chase after them.

Today, the brigade is under the command of First Lieutenant Abu Uday, a Homsi who defected from the checkpoint in Hammurya.

When we participated in the battle of al-Midan, I had 150 fighters under my command. Back then, the Ghouta was surrounded, while Douma was totally occupied by regime forces. We decided to go to Damascus and chose al-Midan as our point of departure, since we have a popular support base there. 200 fighters from the “Battalions of the Martyrs of Douma” provided assistance. Further support from Ghouta and from other governorates was expected, but that did not happen. We were able to arrest many mukhabarat agents and soldiers, and seize some armoured cars and Dushka heavy machine guns, but the regime razed al-Midan to the ground and over our heads. We did not receive any assistance so we decided to retreat on the fifth day.

I recall asking a local there about the way out, to which he responded: “Unless the earth cracks open and swallows you, there is no way out of here.” We managed to escape by breaking through adjacent walls from house to house. We left al-Midan only with our injured soldiers and light weapons.

We continued to carry out operations in Yalda, al-Hajar al-Aswad, Yarmouk Camp, Babbila, Beit Sahm, and ‘Aqraba. During our time in al-Midan, the fighters in these localities were able to liberate them.

We also tried to carry out operations in al-‘Amara neighbourhood in Damascus. There were 40 of us and we based ourselves in some safe-houses there, but were soon found out. We lasted about 3 or 4 days and then lost 14 of our members. We could have lost everyone but Abu Khalid and I led some fighters into Bab Touma Square where we shut off the main road with our cars and skirmished with the army and the mukhabarat in order to assuage the blockade on al-‘Amara. We were successful in saving the rest of our fighters but we lost our cars.

Following that, we begun planning to liberate the Ghouta. Our most important accomplishment was striking the mills in al-Ghizlaniya which the regime had been using as ammunition depots. This happened on the eve of Eid al-Adha in 2012. We seized a large amount of ammunition, and a week later attacked the Harasta al-Qantara battalion and seized whatever weapons it had as well. We managed to strike all of the regime’s battalions in the Ghouta in ten days’ time. The regime fell in this region, and our esprit du corps was lifted.

But as our borders now stretched, so did our frontline. Some of our fighters put their feet up thinking that the regime had fallen. In the meantime we carried out attacks on Damascus airport, Tishreen palace, and the state-security headquarters. People were able to cross through to Jordan without anyone harassing them, but we did not go anywhere outside the country.

Since the start of this year things havestarted to stagnate. People are in pursuit of slogans and financiers; every wise guy is out to make a name of himself, forgetting that Bashar is not gone yet. The whole thing is so long anddrawn-out, life is expensive, food and ammunition are scarce, and some groups now swear their allegiance to outside forces; to Saudi Arabia, to Qatar, and to Kuwait.

Currently, we are trying to secure enough ammunition. If we are able to do that, then the rest is a breeze and we can restore our sense of purpose. The regime’s siege on Ghouta does not worry me, since we can easily break it off if we have enough ammunition.

I fear what will happen if the battle drags on too long. Imagine if the whole country was destroyed and its population gone. People are hungry. If this stretches out much longer then we may have different gangs and groups and conflicts, and more thieves.

We will triumph. There is no doubt about that. I can see that clearly. But we need time, patience, and wisdom. We have not lost our nerve, and we have not broken down.

Jabhat al-Nusra worries me. After the regime falls, I fear that they may cause bombings, harm the people, and mess up the country even more. We are definitely not on the same page as Jabhat al-Nusra. Our conflict with them will most likely turn into an armed one, and there will be assassinations. I am sure of that. We will not allow for anyone to jeopardise the security of this country once the regime falls. We will not drop our guns until we fix the country.

We want an army whose officers aren’t corrupt, and don’t steal or smuggle our country’s oil abroad and mess up our national budget and economy.

The Free Syrian Army should be free and not steal. There are some among us who do steal. We will strike them on their hand and hold them accountable with everything that we have, even if they are major generals. Actually, we once detained a major general and held him accountable because he stole.

We want a just system that applies to all. Personally, I will not hand over my weapon until I see that.

It is not acceptable for anybody to impose themselves on us. Elections and freedom are our priority.

At the end of the interview Yassin al-Haj Saleh asked Abu Qusay whether he felt comfortable carrying arms and being in power, to which Abu Qusay responds: “God forbid! We took to the streets precisely because we are against power-hungry despots. We want to be normal, and a quarter of the people are like us. It is true that some opposed the regime because they were after power and political positions, but there are many noble people out there, and they will no-doubt prevail.”