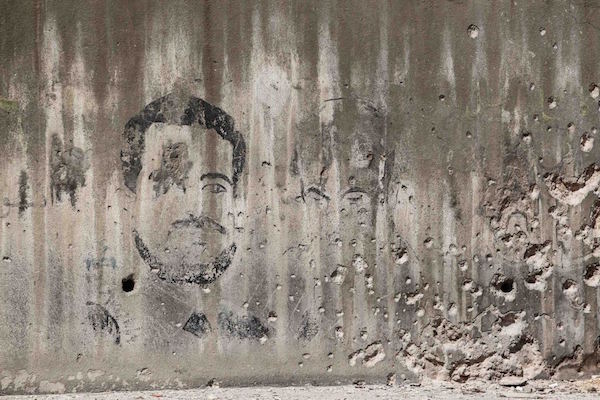 Ba’ath Party Bones Jutting out of my Foot

The branch was broken off the tree itself, but was still suspended among the rest of the branches. I saw it as if it had already happened. The wind hadn’t yet tossed the branch onto the ground; it had other plans. Who am I to stir the wind?

I concealed my surprise as I gazed at the branch and began to think about the tree. I didn’t know what kind it was, this tree that rose up beside the road, just beyond the commotion of Rouen, France. I noticed, for the first time, that tree bark looks like camouflage, exactly like Marines’ uniforms, or the fabric military uniforms are made of. I realised that military uniforms are produced to look like trees, and not vice versa; that the overlapping light and dark greens was created by nature itself.

There’s a bridge for the train, with stairs on either side going up and down. I remember seeing, for the first time in my life, soldiers from the Syrian Army gathered under a bridge like that in Damascus, waiting to shoot at the protesters. At the time I didn’t realise that I was in the line of fire; I didn’t know how dangerous it was. Bullets were aimed at everyone. I was staring like the idiots in the Syrian Army, without inhibitions. They were ridiculous: they looked how I imagined our Israeli enemies would look. That was something I hoped to see in real life so I could spit on the ground before them and shout, ‘Syria belongs to us, not Israel!’

In primary and secondary school, we had military drill class, a weekly compulsory session. We were taught methods of verbal defence in the battle against the brutal Zionist imperialist enemy. We repeated slogans, none of which I remember now. They might have been something like, ‘Our eternal leader, the secretary-general Hafez al-Assad.’

One day they dragged the girl who sat next to me in the Baathist seat out by her hair; I was in the eighth year of school. Some fat women and some skinny women – instructors who managed internal affairs in the school – dragged the girl out of class. My memory protects me from the pain of remembering the girl’s name. When they started to kick her I told the teacher I needed to go to the toilet. I wanted to know what suspicions they had, why they had seized her like that. ‘Please, I’ve got a urinary tract infection,’ I said. They didn’t just let us leave class and go to the toilet, we always had to ask permission.

In the hallway I saw her slight body wrapped in green fabric, the fabric of the military uniform we were obliged to wear as al-Assad’s young soldiers. I saw her moaning at the instructor’s feet. The woman dyed her short hair an almost rusty colour. I started to swear at her, I ran down the stairs until I got to the courtyard, then went into the dirty bathroom where the urine and other filth was never cleaned, only on big national holidays. I held my nose so I wouldn’t smell the stench, I was lost in thought for a moment, I didn’t want to go into the bathroom. I went back to class, and to my seat, and thanked the generous maths teacher for giving me five minutes to respond to nature’s call.

Am I a tree, with this green fabric I wear? My mother had bought the lousy, cheap fabric, and the colour faded a little more each weekend when I washed it. My military uniform became almost beige; I was different, and happy, and every time the instructor spoke to me about it, I told her, ‘I’m poor, they can’t buy me a new uniform.’

I would apologise sheepishly, and she would accept it and let me go. My uniform was baggy, so I wore a belt around my waist; “al-Nitaq”, they called it. It felt like a chastity belt to me. I also wore my rank on my uniform, I didn’t commit any infractions, and I wore my military cap in the courtyard. I shielded my broken, fearful eyes, and a single thought spun in my head: when Hafez al-Assad ate sunflower seeds, did he eat them himself? Or did someone shell them for him with their teeth, and pick out the tasty kernels? And if he had someone do that, didn’t he find it disgusting? Even if the president could do anything he wanted, he had to find that disgusting. Sunflower seeds were so cheap and plentiful in Syria; I really liked them.

A few days later, I found out why the girl who sat next to me was dragged out of class and beaten. It was because she had defaced the image of Bassel al-Assad, the martyr. I wanted to know how she’d done it. Had this martyr lost his face in the grave? Possible meanings multiplied in my head; I didn’t know what was true. How someone could tarnish the face of someone who wasn’t there, someone who, precisely speaking, was dead? I reached over to her desk. Had she ripped off part of Bassel al-Assad’s picture, part of his face, his mouth? ‘Did he no longer have a mouth? Silent, dead, and in disrepair,’ I thought to myself. The girl never came back. Was she dead?

I left the class each period, taking refuge in my imagination; I fled, I flew, I wandered through the city. The strange part was that I let my spirit float in the air, tethered by a thread, as if it were a balloon. Whenever the teacher called on me, or asked me about something, I told her what she wanted to hear, right away; I was programmed for what they desired. I felt like my spirit and mind were something else, something free of lies and political hypocrisy. A few days after the incident with the girl, I brought in a picture of Bassel al-Assad and stuck it to my notebook. I stared at it, in class, and none of the teachers could complain, because it was a picture of Bassel al-Assad. I played dumb, completely and instinctively, so I could get out of things I had to do. I was drawn to how perfect the image was, I stared at it closely, I wanted to know what the secret was, this dead man. Finally a friend of mine came up to me and said, ‘That man is bad,’ and I asked her, ‘How do you know?’ She told me he was the President’s son, that he froze her mother’s friend’s passport and prevented her from traveling abroad, like she wanted to.

Suddenly I wanted to get rid of the picture, and my fear. I wanted to not even leave a trace. I took an empty bowl, ripped up the picture, and set fire to it. I watched it turn to ash, all the colours mixing with the white bowl. I stopped eating at home. I grew thin and gaunt in my compulsory military uniform, as if I were a recruit being punished, a traitor to the military age.

I was always jumping during those days; once I leapt down five whole steps on my way to school in the morning. I fell on the last step, and felt a sharp pain on the bottom of my foot, an awful pain, but I continued on my way to school. In military class the teacher made us stop and do physical exercises. I suffered in silence, while forming the sentence in my head, practicing telling her, ‘I’m in pain; I broke my foot.’ I said it again and again, moving my foot so slowly, carrying out the military orders and drills. I nearly collapsed, and finally I shouted, ‘Miss, please, I broke my foot.’ I didn’t know any of the harsh insults that rained down on me; she told me to stay where I was, follow the drills, and be quiet. What I remember is that every time I feel the bottom of my foot – to this day – I’m surprised to find a bone jutting out, where the break healed. I neglected it, though I shouldn’t have. I call this bone jutting out from me the Ba’ath bone, the political party bone, Syria. I’m reluctant to have it altered with surgery, so the memory isn’t altered.

The primary and secondary school military uniforms covered the bodies of malleable boys and girls. Underneath the uniform, I felt like my body was a beautiful mystery; my breasts hidden underneath the big pocket on the chest. We were as innocent as trees, as worn down as traitorous soldiers. I remember when the headmistress allowed young men into the high school, that for the first time in my life I faced harassment. One of the young men harassed me unabashedly. They were allowed to enter the school and play with the young girls. I later discovered that the the room of the Baath party school cell was where sexual assaults took place, against girls who agreed to stay after the youth meeting ended. They were all underage, and Damascus was a city open to militarisation, trafficking, and futility, in the name of the Arab Socialist Ba’ath Party, and in the name of the beloved leader, Hafez al-Assad: guardian of the youth, and the homeland’s protector against the oppressive enemy, Israel.