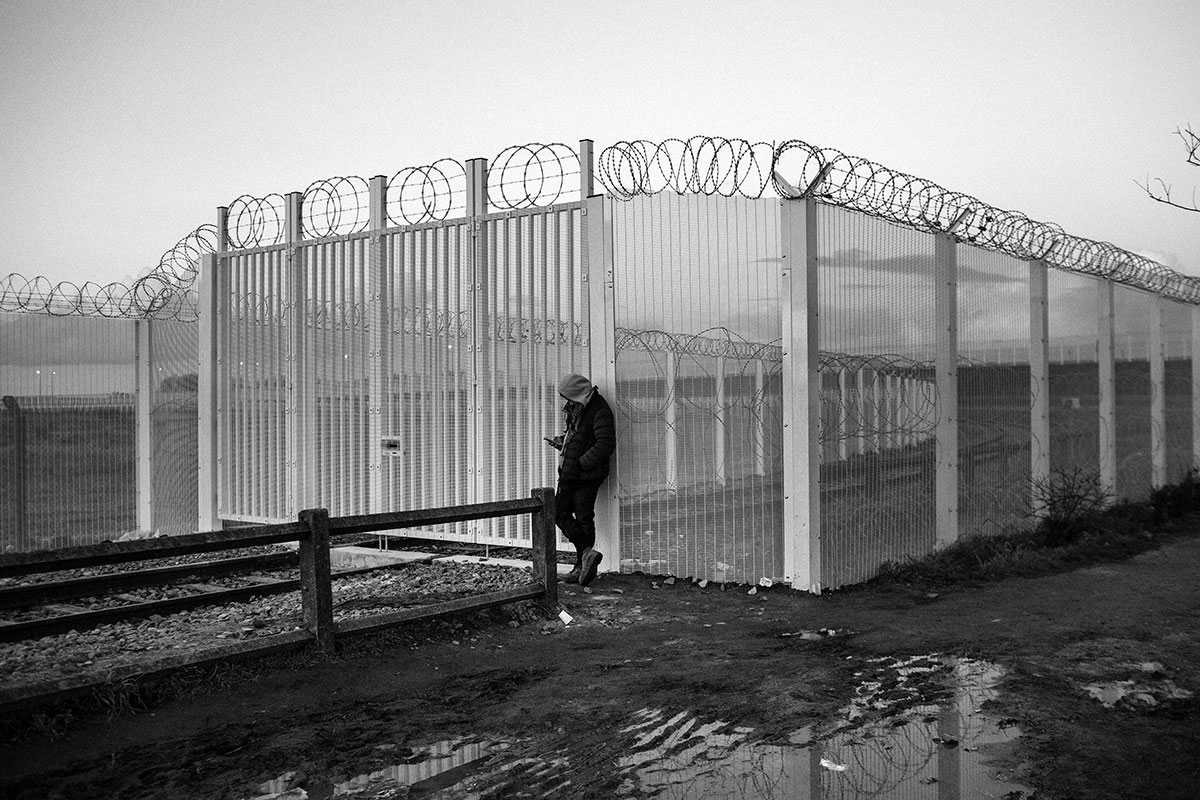 As Europe faces not only the recrudescence of another ‘refugee crisis’, but one that is considered the largest in history, it continues to establish some of the most exclusionary and militarised schemes to reject and impede the movement of ‘non-citizens’, a category that may include within its spectrum refugees, stateless people, asylum seekers and migrants.

In this article, Maya Schkolne, who has recently completed her MSc in Politics of Conflict, Rights and Justice at SOAS University in London, aims to highlight and examine the prospects that exist in the human rights framework, which necessitates a radical readjustment in order to more compellingly invoke the humanity of all.

Blatantly reinforced by Islamophobic resolve, the Hungarian Minister of European Parliament Gyorgy Schopflin recently recommended the placement of pig heads on border walls. The British MEP Roger Helmer also suggested building a wall around, and thus effectively ghettoising, those within the informal camp in the northern French city of Calais.

Though such rhetoric has been treated with derision from many quarters, they undeniably dovetail with concrete policies and practices. The National Health Service in England will require pregnant women prove their citizenship before giving birth, and at the latest Conservative Party Conference, the United Kingdom Home Secretary Amber Rudd outlined proposals compelling companies to publish their proportion of foreign staff.  Entrenching the official efforts to ride roughshod over the dignity of immigrants, this mirrors the UK’s introduction of obligations on schools to collate information on the nationality and country of birth of its pupils.

Meanwhile, in the middle of September construction initiated in Calais on a four-metre wall to block migrants and asylum seekers from entering Britain. While the drowning of those in the Mediterranean endures, immigration detention is also becoming increasingly common across the continent, with approximately 600,000 foreign nationals detained each year without charge or trial, of which about 40,000 are minors.

The spectacle of figurative and material deterrence against non-citizens plays out in the full gamut of Europe’s border securitisation regime. Nevertheless, not each manifestation of Europe’s hyper-sovereignty is as overt as those examples provided above. State officials often shroud migration practices in secrecy and euphemistic terminology while entangling asylum processes in Kafkaesque bureaucracy. These dynamics exhibit the prevailing tension in Europe, which sees liberal democracies pushing the boundaries of their human rights duties while prioritising territoriality.

The Human Rights Framework: Apparatus for Punishment and Exclusion

Ferociously supplementing Amber Rudd’s anti-migrant statement at the Conservative Party Conference, the UK Prime Minister Theresa May emphasised the weight of national citizenship stating, ‘If you believe you’re a citizen of the world, you’re a citizen of nowhere.’ Embedding a binary between inclusion and exclusion, the categories of ‘citizenship’ and ‘territoriality’ are implicit in the politico-legal thought and practice of liberal democracies. Their conceptual construction can be traced to the periods even preceding the formal emergence of liberal democratic states, when the ‘people’ over whom the ‘sovereign’ was seen to rule was conceived as those with membership in a polity within demarcated borders.

Ironically, this offered citizens the ‘insider’ status to exclusively guarantee what were ostensibly ‘universalistic, inalienable’ human rights. In contrast, those cast out of the territory were rendered powerless in laying claim to these rights constructed on ideals of the inherent and equal moral worth of all. Hence the notion of citizenship became one of the central markers for, and tools of, exclusion premised on the particularistic notion of territoriality.

Hannah Arendt notably spoke to the egregious consequences that came to bear between the two World Wars when protection was solely granted to those officially belonging to a polity. She remarked, “the Rights of Man, supposedly inalienable, proved to be unenforceable – even in countries whose constitutions were based on them – whenever people appeared who were no longer citizens of any state.” Her analysis on the illusory ‘right to have rights’ underscored the conundrum with the human rights regime as structured within the scheme of nation states.

Lauded for dawning the liberal epoch, the post-World War II period has since seen the development of human and refugee rights through the adoption of a series of conventions, treaties and policies. The expansion of norms is epitomised by the recognition of each human being as a person before the law, as encapsulated in the International Covenant on Civil and Political Rights (ICPR). A broad consensus asserts that these institutionalised principles constrain the policy making and actions of democratic states, ensuring that they are accountable to a wider set of people.

Despite the optimism, however, the human and refugee rights framework still indisputably derives its authority from sovereign states rather than from human beings. Moreover, it remains automatically fixed on the ‘human’ as indivisible to ‘citizenship’, from “where rights flow… rather than inhering to individuals by virtue of their humanity”.

Over-and-above these inherent structural limitations, the refugee classification processes enforce strict criteria to define those in need of “genuine” asylum. Therefore, even as many asylum seekers conform to what is expected of them, judgment is largely rooted in challenging bureaucracy and factors out of their control.

These factors make it easier for European politicians to issue diatribes against individuals as “illegals” or having “bogus” asylum claims, which rely on racialized, gendered and classed coding and imagery. Such rhetoric depicts these individuals as guilty of exploiting and overburdening the entire refugee protection framework and as an affront to stability and security. More than merely a pejorative, their symbolic alienation and criminalisation justifies their systematic exclusion. This was demonstrated in a 2012 interview with the then-Home Secretary of the UK Theresa May who stated, “the aim is to create here in Britain a really hostile environment for illegal immigration”. Hence while their fundamental human rights, including their right to freedom of movement and liberty, is theoretically protected by international law, these individuals are neither treated as citizens deserving of membership into the polity nor as refugees that ought to be granted protection.

Transformation of Non-Citizens into the ‘Homo Sacer’

The procedure of establishing a hierarchy of lives ties into Michel Foucault’s notion of ‘biopower’. Distinguished from sovereign power, this connotes a process in which states and outsourced actors evaluate, measure and categorise lives according to their value and usefulness. Similarly to crude courses of biology, those deemed aberrations or “intruders” are simply “cast out”. This is achieved through intricate techniques of surveillance, control and enforced discipline.

Giorgio Agamben emphasises that refugees represent the ultimate biopolitical subjects, or the ‘homo sacer’, who are banished to grey areas of legal limbo where they become unnameable and thus ‘expendable’. It is possible to incorporate all non-citizens into this ambit, many of whom have been forcibly reduced to ‘bare life’ through their displacement and economic, social, territorial and, or political expulsion. The exclusion of the homo sacer is central to the logic of modern liberal democracy that is obliged to grant equal rights to all yet has the capacity to deny some those rights.

It is crucial to scrutinise the liberal discourses that depict these processes as reasonable and necessary. Furthermore, though the homo sacer is symbolically constructed as a threat, the figure is simultaneously produced as a victim in need of protection. This paradoxical pattern that reinforces inclusion and exclusion has historical resemblance outside of Europe. In fact, Thailand’s response to Indo-Chinese immigration in the early 1980s was termed ‘humane deterrence’. This referred to its move to shut down the refugee camps that were running smoothly and cancel the efficient resettlement programs for asylum seekers, which was framed as an indispensable part of handling a swell of inauthentic asylum claims.

These factors contribute to a scenario in which non-citizens are effectively blamed for their own lack of protection and the harmful policies imposed onto them. Such a reality points to the pertinence of ‘thanatopolitics’, or the politics of death, as discussed by Achille Mbembe.

Though liberal democratic states may prefer to settle the removal of non-citizens through deportation, the human and refugee rights frameworks presents considerable constraints to this action. In particular, the vital principle of non-refoulement prevents contracting state from expelling or returning a refugee to a territory where their life or freedom may be threatened.

While this imposes a negative obligation on states, it places no positive obligation to ensure the permanent settlement of non-citizens. This provides the chance for states to work from within the framework to place this category of ‘undesirables’ in immigration detention.

European actions around immigration detention reproduce the push-pull dynamic at the core of liberal democracies. On the one hand, states go to great lengths to downplay the character of the practice and ensure the invisibility of the violations therein. In addition to complicating chances for citizens to enter the spaces freely, officials use liberal “hospitality euphemisms” to characterise detention.

New signs at the entrance to the Yarls Wood Immigration Removal Centre for women, which is sequestered in the remote UK town of Bedford, read ‘Trust’ and ‘Respect’. In Bulgaria, detention centres are classified as ‘specialised homes for temporary accommodation of foreigners’, which even motivated a Bulgarian journalist on state television to describe a center as a ‘charity home’.

Immigration detention is therefore facilitated by the human rights framework, which provides the apparatus for states to transform non-citizens into the ‘homo sacer’. Banished to this enclosed physical space that represents the materialisation of biopower, their lives become regulated by strict administrative logics, observation and monitoring while their rights are essentially suspended.

Reduced to the ‘bare life’, detainees are not only routinely subject to violations of human dignity but are also largely barred from equality of opportunity, the right to due process and the right to personal hearings. Their detention status is rarely reviewed and the translation, medical and legal services provided are very poor, if granted at all. Immigration detainees thus experience one of the ultimate forms of exclusion in liberal democracies, as they even lack the rights that are guaranteed to those incarcerated under criminal law as citizens of a state.

Though their options appear stark; detainees can still attempt to make rights based claims and organisations can become involved on their behalf, indicating that these centres are not entirely ‘lawless’. This glimmer of hope can be harnessed to fundamentally change the way migration issues are approached through human rights.

Beyond the Boundaries of the Nation-State

The reiteration that Europe needs to grant migrants, asylum seekers, stateless people and refugees their human rights as outlined in treaties and constitutions tends to apotheosize the legalistic framework in its current form. This call frequently fails to unpack the framing of the human rights framework that facilitates and legitimises Europe’s punitive actions against non-citizens.

As a matter of urgency, the human rights regime needs to be reimagined beyond the boundaries of the nation-state. By working to expand the framework to incorporate and provide protection to all within the ‘non-citizen’ category, we can more forcefully counter the routine transformation of this category into the ‘expendable’ homo sacer.

Maya Schkolne Maya Schkolne recently completed her MSc in Politics of Conflict, Rights and Justice at SOAS University in London. Her dissertation was on immigration detention within border securitisation in Europe, and was actively part of the SOAS Detainee Society. She also worked as an intern with the Centre on Conflict, Rights and Justice at SOAS.