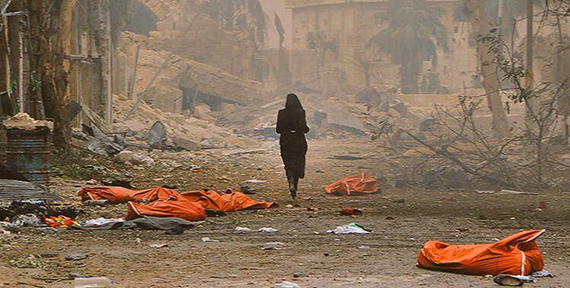 Our Testimony to Death

Somewhere, there are scattered corpses along a road that looks completely destroyed, with blood around orange bags holding still bodies. You see destroyed buildings that have chaotically hurled parts of their rubble inside the frame, while keeping their residents under silent ruins.

Aleppo/Al-Jazeera: “The Syrian government forces shelled groups of civilians as they fled their neighborhoods in Eastern Aleppo, killing at least 45 people. Witness accounts confirmed bodies of….”

It is just an image, containing something, a new event; a newsworthy event, but look closely at the image, it resembles an event we have witnessed before, time and time again.

Eastern Ghouta/Al Arabiya: “The death toll of the Deir al-Asafir massacre has risen to 32 civilians, mostly children, following more than 10 air raids carried out by the Syrian air force on two schools and a hospital in Deir al-Asafir near Damascus.”

Today, the audience witnesses images of intense and bloody events, receiving shock after shock, in a very narrow time frame. This sensation could be numbing. The numbness that follow a fifth blow to a certain part of the body, or a fifth slap, or a fifth stitch. This sensation that follows repetitive blows could be a mere defense mechanism developed by the unconsciousness, in a world filled with violence which it cannot control. It is the last weapon of confrontation.

Maha opened one of her eyes and looked at the window next to her bed. It’s still nighttime. She lifted her head with lethargy to look at the clock hanging on her wall. It’s eight in the morning. She quietly moved to put on her clothes, and went into the darkness towards her job in the city, to which she has relocated last year after an arduous journey. Aleppo to Turkey, and then water and land until she reached Sweden.

On her way, she almost collapsed as her body’s strength betrayed her. She sat on the side of the road, placed her hand on her heart. The heavy beats scared her. She felt anxious, as breathing became impossible. Within a few seconds, she fell to the ground.

The 20-something-year-old girl works at one of the organizations involved with the Syrian situation, and her main role entails the documentation of images and videos related to the events in her country. She spends more than eight hours a day following, watching, and documenting massacres, casualties and injuries. She places everything under specific columns: names, dates and places. Watching and documentation is a routine process for her: “It’s just routine work, I don’t feel anything, I got used to watching…,” or so she says.

Routine is a safety net, as Maha calls it. She leaves the office, meets some friends from different nationalities. They talk about simple mundane things. She then goes to her house, located in one of the quieter neighborhoods, where she watches a film and sleeps. For 360 days she did not change her daily routine, until the moment she fell to the ground.

One could say that the reason behind Maha’s panic attack was stress. It is the clash between the conscious and the unconscious; the conscious embodied by her desire to forget, to cope and continue; and the unconscious filled with her previous and present trauma. It is apparent that panic attacks come from a sense of insecurity; complete loss of control and ignoring the weakness and feigning strength. It is the direct alarm set off by the body when it can no longer ignore.

During war, many physical illnesses prevail, the reason behind which is the deterioration of the psychological state and the attempts to treat oneself with strict cruelty. Perhaps the feeling of helplessness and uselessness in the face of an ever-threatened fate, and the complete absence of any sense of safety towards the planet’s rule, is the motive for aggressiveness against the self.

Morning, Beirut, I woke up at seven. Waking up early is a habit I have developed after my thirty-first birthday. I pulled the cover towards my face and tightly wrapped it around me. I feel an overwhelming sense of drowsiness and exhaustion, the reasons for which I don’t know. But the machine, my brain, began working chaotically, demanding me to get up. I ignored it, I ignored it again, I gave up. I got out of bed, performed the daily human process in the toilet, and headed towards the kitchen to make my coffee. I turned on my device, and in a nonchalant manner, redundant like everything else, opened a number of news websites, until I stopped at this news.

Al-Arabiya website published a news article which read: “French Minister of Foreign Affairs Jean-Marc Ayrault said in a statement on Wednesday that his country will put further pressure for an international decision from the U.N. to impose sanctions on the Assad regime for the use of chemical weapons.”

A wave of confusion swept over me as I read the news. For a moment I thought I have stumbled upon the website’s archive, but I read it again and made sure of the day. It was new; a repeated statement about a repeated event.

In 2013, the Syrian regime committed a massacre in Eastern Ghouta using chemical weapons. Regional and international responses were angry and stern.

Paris/CNN: “French President François Hollande said on Tuesday that the chemical massacre which took place in Syria last week will not go unresponded, following rising tensions between the west and Syria over the use of chemical weapons against civilians.”

A few minutes later I stood up and walked around the house, back and forth, loudly talking to myself in an attempt to recall my initial reaction; my first emotion towards the news. My initial reaction was to confirm the date of the event and mock the repeated reaction towards it by the French Minister of Foreign Affairs. I confirmed that civilians were killed and injured because of the regime’s use of chemical weapons. The first emotion was slight sorrow and anger at a world that still hasn’t done anything until now, and after all these years, to stop all massacres committed against civilians in Syria.

My second reaction was to make a phone call to follow up on something mundane, and then to continue my work, which I was almost done with.

I stopped moving, and demanded my brain to offer me a simple scientific explanation for that, based on a physical illness, without having to resort to theories of repetitiveness and familiarity. I don’t want to familiarize. My brain worked out a theory, which logic I can’t verify, and it said: “My memory holds many events and images related to the war in Syria, as well as emotions and feelings. Therefore, what happens during the first few seconds after receiving the news is your memory’s recollection of images from the 2013 chemical massacre, along with the emotions felt at the time, it is time…”

I did not quite understand what my brain meant, I tried to interrupt it but it ignored me and continued: “The time that has passed from the initial exposure; the last storing and recollection, did not cancel the anger and sorrow towards the new event. But these two emotions are exhausted. They have been brought back during your memory’s recollection of the previous event, and what helped was how similar the two events were, that’s all.”

Al-Arabiya: “The regime gains control of third of opposition-held areas in Aleppo…”

CNN: “The United Nations warns that Aleppo could turn into a massive grave.”

Even though the regime’s massacres against civilians never stopped during the Syrian revolution, with recurring events and images, the feelings of anger, sorrow and condemnation towards what’s happening in Aleppo today dominate the media and social networks.

Somewhere, there are scattered corpses along a road that looks completely destroyed, with blood around orange bags holding still bodies. You see destroyed buildings that have chaotically hurled parts of their rubble inside the frame, while keeping their residents under silent ruins. But in this image, in the middle of the frame, a woman’s body, showing us only blackness. One of her legs is slightly lifted up, is she walking directly towards us or is she walking forward away from us?

Soon enough, she will be out of the frame, and we will all completely disappear.