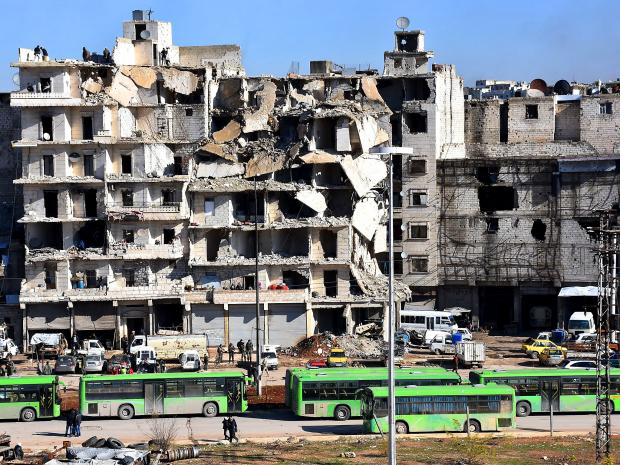 Evacuation. It sounds like a humanitarian operation. The word conceals its brutality. Haunting drone footage shows a seemingly endless convoy of ambulances and green buses snaking their way through a destroyed and desolate wasteland. Those who leave their homes, the city of their childhoods, may never return. This is the Syrian Nakba. It’s a trauma both individual and collective. And its impact will be felt by generations to come.

Shocked and shaken, men, women and children emerge from green buses. The injured and the elderly. They tell stories of horror, of humans left behind, trapped under the rubble, with no one to help them. They are thin and gaunt, and reports emerge of rebel groups hoarding food, criminally withholding it from besieged and hungry residents. Yet still they chose to go to Idlib and the western Aleppo countryside, under rebel control and constantly targeted by airstrikes and barrel bombs, rather than return to Assad controlled territory to be silenced and humiliated once more.

Inside eastern Aleppo, on the bombed-out walls, Syrians graffitied their final messages to be read by a victorious incoming occupation army. ‘Our destroyed buildings are a witness to our perseverance and your criminality,’ said one. Another read, ‘Under every destroyed building are families buried with their dreams by Bashar and his allies.’ And simply, ‘We will return’.

The international community’s response to Assad’s crimes is forced population transfer. Again, it sounds very clinical, this word which was described at the Nuremberg Trails as being both a war crime and a crime against humanity. It doesn’t capture the horror and heartache, the dislocation as families are severed from their lives. In Aleppo people overthrew a tyrant for a dream. They struggled to build a society free from the grip of the state. Now all their gardens have turned into graveyards.

This is Assad, Russia and Iran’s ‘peace plan’ for Syria. The systematic cleansing of all communities that oppose the regime. In recent months there have been forced population transfers around the capital and in Homs; in Zabadani, Darayya, Al Tal, Moadamiya and Al Waer. Assad’s ‘surrender or starve’ policy placed these communities under siege, implemented by Russian airpower and Iranian-back militias. Under relentless bombardment, and in desperate need of food and medical supplies, they were forced to capitulate. In some cases, as they were ‘evacuated’, a new generation of settlers, foreign Assadist loyalists, were moved into their looted homes.

Six years ago Syrians rose up because they wanted democracy. They rose up because they wanted a say in their country which, for half a century, had been run by a family dictatorship and a mafia clique. It was a revolution which contained all the beauty and hope of the world in its dances, chants and songs. No one stood with them. They were abandoned. They were slandered, shot, tortured, bombed, gassed and starved.  And now they are exiled from their homes, against their will.

Maybe some will wash up on the shores of your home town, and you will call them ‘refugees’. Meanwhile the tyrant still sits on his throne. This bearer of death and destruction.