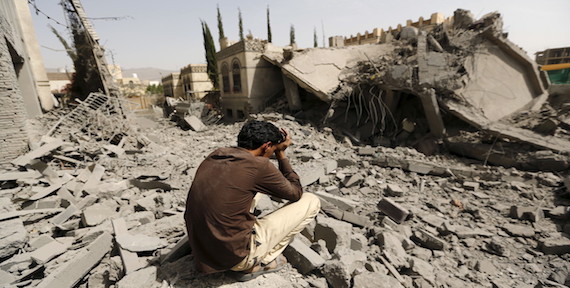 Yemen Through a Syrian Lens

When I was born three decades ago, the family came together to discuss what my name would be. The debate was fierce, as is typical in a Syrian family on many matters big or small. The leading contenders were: Omar and Tarek. Not perfect choices, my parents felt, but those choices seemed to appease all. It was my father – a civil engineer of stout stature – who suddenly changed everything with a new suggestion: Yazan.

The name Yazan was rare, deeply rooted in Arabic folklore, derived from the tales of Sayf bin Dhi-Yazan, a Yemeni king whose feats inspired legendary tales of suspenseful swashbucklery, wild magic, and cunning strategy still told to some children today.

In hindsight, it was a hard name to live up to and I don’t think I’ve come close.

It was also my first indistinct connection to Yemen.

Flash-forward many years later and the connection I had with Yemen modestly grew through the Yemeni friends I had the fortune to meet and non-Yemeni friends who had worked in the old nation. My attention to Yemen, like many others, was further heightened after the eruption of an uprising there in 2011. The uprising in Yemen was part and parcel of a regional uprising which had dramatically unfolded across the West Asian and North African region. That period was a powerful reflection of the widespread, deep yearnings for transformation simmering in all of us. A handful of years later, after all the death, destruction, and misery we have witnessed and continue to witness, the conditions at the moment make it extremely difficult to remember that sense of hopefulness experienced, what feels like, eons ago.

As a Syrian, I was certainly consumed with what was happening in Syria. It was frankly inescapable, even if I tried to ignore the events as a person existing outside of the country, on the periphery of the conflict. Yet the ramifications were omnipresent. I had family, close and far relatives, friends, scant acquaintances and strangers sharing stories of their struggle against and within extraordinary circumstances. Homes destroyed, bodies and minds damaged, lives snuffed out, dwindling resources and funds, and the desperate desire (some of which was acted upon) to escape to a safe asylum. Perseverance or despair, strive or surrender. And always, underlying all the stories and experiences was the sheer horror of an unknown future, as the present was marked by accumulating rubble on the ground and bombs unceasingly falling from the sky.

Eventually, I found myself working with the international medical organization, Médecins Sans Frontières (MSF) as part of its regional communications team based in Beirut. MSF delivers emergency aid to people affected by armed conflict, epidemics, natural disasters, and exclusion from health care based on need, irrespective of race, religion, gender, or political affiliation.  In the region, MSF works in many of the countries, most notably the ones engulfed by the savagery of warfare such as Syria and Yemen.

Through MSF, I recently found myself dispatched to Sana’a to support the field communications team for the span of nearly three weeks. Truthfully I had no idea what awaited me. I was nervous. My family and friends were nervous for me too. Yet when I landed in Sana’a, and throughout the duration of my stay in the country until the moment I left, I felt a profound sense of familiarity and acceptance.

The parallels with the Syrian experience were abundant. I was faced continually with people eager to open up about their extraordinary experiences, telling tales of basic survival, perseverance, and the need to move forward, ever forward, under dangerous and exhausting circumstances. Beyond the headlines about calamitous conflicts, there are people who are adapting to the increasing restriction of resources and funds. There are people who, despite the very contentious politics, are still determined to live out their lives, work for the betterment of their society, and simply exist.

The tales are many. The medical staff that still come to work despite not being paid for months. The parents who offer soft comfort to children terrified of the sound of airstrikes. The patients who have lost limbs yet are nevertheless determined to walk the long road to recovery and a sense of normalcy. It goes on and on. Overall, there was a quickness by the people I met to open up their lives, make jokes in the most difficult circumstances, and empathize with the struggles and difficulties facing communities outside of Yemen, particularly Syria.

It is the latter aspect, the empathy, which really struck me. It was evident when I mentioned my origins to the Yemenis I spoke with. Usually I am weary to say I’m Syrian to non-Syrians because the reactions in the last few years have been predominately negative – chiefly the pity. Yet in Yemen, the reactions were not of pity, but sympathetic camaraderie. Immediately I was faced with expressions of sadness over what’s happening in Syria, great understanding of the calamities befalling its people, and a real heartfelt hope for the better. This coming from a people facing a destructive conflict in one of the poorest countries in the world, where vital infrastructures are collapsing under the weight of decades of neglect and massive challenges.

I was in awe and humbled by this expression of dignified solidarity.

Reflective of Syria as well, Yemen is fraught with the dominance of warring narratives produced and diffused by more powerful organizations, actors, and/or entities which also are backed by powerful regional and international forces. These forces produce and articulate absolutist narratives that cater to simplified yet potent discourses of sectarianism, proxy wars, and battles against terrorism.

As what we have witnessed in Syria, Yemenis who do not prescribe to the absolutism of ‘us’ vs. ‘them’, are being stifled and crushed, with little to no solidarity or support from within and outside of the country. Like Syrians, the core ideals longed for – such as liberty, dignity, an unprecarious life, to name but a few – are also what most Yemenis desire. That should remind us that on a grander level, we are all part of a collective struggle for inalienable rights, and we all, in one way or another, are denied these inalienable rights by a multitude of forces, ideologies, and interests.

Yemen is not as widely covered as Syria for many reasons. This cannot continue. Yes, the intensity of violence and destruction is larger in magnitude in Syria and has been going on for longer, but this does not justify one bit the general failure to spotlight and display concern for the Yemeni experience. The suffering in Yemen whether directly by the hands of all armed actors without exception or indirectly due to the ramifications of warfare cannot be ignored. While we Syrians demand and expect, rightly so, solidarity from people, we must also extend solidarity to those in the region, and even beyond. Our miseries are inherently the same, regardless of the different shades, nature, levels, means, and fists that create these tragedies.

I am trying to do my part by talking about Yemen, as I try to talk about Syria, and I hope people listen to stories about Yemen as they do from time to time when it comes to Syria.

Ultimately, if I have a simple message as a Syrian to all the Yemenis I have met or haven’t met and for others to hear: We are unified in our misery, my friends, and despite that, I really do believe that just like in Syria, you and we will pick up the pieces together once the bullets and bombs have been silenced, and   we will move forward towards something better.

Yazan al-Saadi works with MSF’s regional Beirut Communications Team as Creative Content and Special Projects Manager. He was dispatched to Yemen for more than two weeks to provide backup and support for MSF’s communications team in Sana’a.