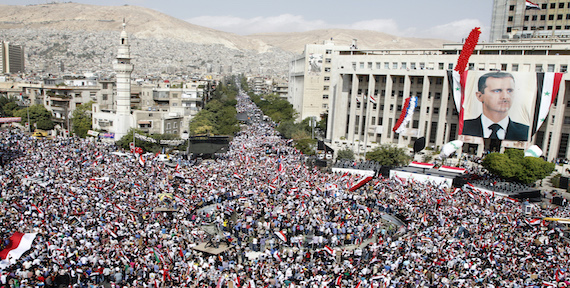 The Case For Reporting From Assad’s Syria

As the Syrian regime of Bashar al-Assad advances on the battlefield and solidifies its control over the most populous, prosperous parts of the country, it evidently wants to wage, in parallel, a campaign to recapture its international political legitimacy. Assad’s Syria has now re-opened its doors to some foreign journalists and analysts, whether to provide a sort of narrative counter-programming or to make its case for diplomatic normalization and foreign economic investment – or maybe just to show off its resilience in the face of, it claims, a sprawling international conspiracy against it.

And if and when the regime invites more outsiders in, I think those who safely can should accept.

The character of the Syrian regime and present conditions in areas under its control are a large and increasingly important part of the Syrian story, one on which I think we have limited new visibility. We have to understand what’s happening inside, under Assad. And to that end I think we need credible, independent correspondents describing conditions inside the country – as many as possible.

I went into Damascus in October as part of a conference-junket organized by the British Syrian Society, albeit with clear buy-in from and facilitation by the upper levels of the Assad regime. The optics of participating in the British Syrian Society event were challenging, given concerns that the event would necessarily accrue some political and propaganda value to the regime. And various think tankers, pundits, and activists were sharply critical of my and others’ attendance in what one enthusiastic talking head called “a grotesque PR coup,” in which Western journalists’ participation was used to “launder Assad’s information operation.”

I would argue, however, that attending was worth it for the unprecedented access it afforded us to top-tier officials and Damascus’s civilian elite, as well as for the opportunity to stay on and report from Damascus.

Syrian government officials and other, linked conference attendees undoubtedly used the event to push a handful of key narratives, including ones related to the regime’s war on “terror” and the burden of international sanctions on Syrian civilians. But these arguments and messaging have their own significance, insofar as they give insight into how the regime thinks and where it imagines the West’s political soft spots to be.

And while reporting from Damascus was not without restrictions, there were necessarily some details and interactions that were spontaneous and beyond deliberate state control. When my Ministry of Information-furnished minder was visibly unenthusiastic about entering Bab al-Salam, the Old Damascus neighborhood in which I’d lived before the war – “That’s a Shi’a area,” he said, reluctantly – I learned something firsthand and real about the presence and autonomy of the auxiliaries that have reinforced the Syrian Arab Army. We had the run of the rest of Damascus. It was only at this one checkpoint, on whose gate a black flag had been draped and next to which hung a wall-sized sign showing the martyrs of the Islamic Resistance in Syria, that we were turned back.

Meanwhile, any insight, even fragmentary, into the circumstances of civilians in these areas is clearly valuable. Whatever the lines of political control in Syria, the experience of Syrian civilians should be central to our understanding of the country and the war. And even if the Syrians I met weren’t able to speak freely and openly, it was worth engaging them on a human level and relaying what seemed authentic, whether they told me how the war had destroyed Syria’s domestic alcohol industry or about Captagon-heads smashing windows in Damascus’s suburbs.

Reporting from Assad’s Syria meant seeing dozens of small, real details that complicated and contradicted the government’s line, even as, sometimes, they supported and confirmed it.

I’m convinced that the more independent observers go into Damascus or Homs or Tartous, the more complete a picture we can piece together of the reality inside Syria.

This isn’t to minimize the knowledge or experience of Syrians themselves, either those still living in these areas or who have left but remain in touch with friends and family. These Syrians obviously have a grasp of Syrian society and history, and of what people really think and say in private, that isn’t accessible to an outsider. But the civilian perspective in these areas frequently isn’t communicated effectively to an outside audience, precisely because Assad’s Syria is not a place from which one can speak safely and freely.

The result, I’m convinced, is that there are persistent gaps in outsiders’ understanding of circumstances inside regime-held Syria – among both Syrians and non-Syrians – and that we’ve unknowingly filled them with factoids and rumors that conform to our own biases.

Multiple times since leaving Damascus, I’ve been challenged by opposition-leaning Syrians on my observations from the city. They’ve asked, indignantly, “But were you able to walk around without a minder?”

The thing is: I was. I had the Ministry of Information’s minder on hand when I was conducting man-on-the-street interviews. The Ministry gave my written reporting permissions directly to the minder, who produced them for suspicious Damascus residents when they demanded to see them. In some instances, the minder sat in on or facilitated interviews; in others, at my request, he waited politely outside while I spoke with a shopowner or a patron. But outside these set hours with the minder, I was also free to wander Damascus unaccompanied, during the day and night, either on foot or by taxi.

The point is not that Damascus is a free place, or that even my conversations without a minder on hand were being conducted out of the state’s view. The point is that the fact that these Syrians challenged me on this point means that they didn’t know. And that’s totally understandable. Before I went in, I didn’t know, either.

There are some gaps that outside visitors cannot fill, of course. The darker aspects of the regime’s workings – the interior of its security branches, for example, and its treatment of detainees – presumably will not be made available to foreign journalists. Some more adamant regime critics won’t be let in, or, particularly among Syrians resident abroad, can’t be confident of their safety if allowed inside. And other visitors may be concerned enough with currying favor with Syrian authorities and securing continued access that they soften or dilute their reporting. But I think having even some reporters and analysts who are appropriately skeptical and honest – including about the constraints on their movement and reporting – represents a net gain in terms of our understanding of Syria, its war and its future.

And that benefits everyone, including avowed opponents of the regime. Regime critics are understandably concerned about political normalization with the regime and, less tangibly, the Syrian opposition’s loss of control over the war’s narrative. But if we’re being real, the changing balance of the war and the regime’s apparent decision to resume communicating outwards mean the discourse on Syria is going to be contested in a way it hasn’t been previously. The Syria debate is no longer an intramural opposition and pro-opposition affair. And in this context, if opponents of the regime want to make a realistic, compelling case against the regime, they need to be maximally informed and they need new, independent validation. The opposition’s argument is stronger if it’s based in fact, not polemic.

When I came out of Damascus, I wrote an article about my experience inside in which I said the regime’s pitch for itself and the atmosphere in Damascus had mostly convinced me of how little the regime had learned and changed.

I was criticized by some for participating in the normalization of the regime or for reporting things that, apparently, right-minded people already knew. “Finding this out did not necessitate a trip to Damascus,” wrote the Atlantic Council’s Faysal Itani on Twitter. “So it’s not relevant that someone actually went inside and saw this,” I responded, “instead of relying on received wisdom and hearsay?”

“Received wisdom and hearsay? Defectors previously close to Assad himself have confirmed this, including his Former [Prime Minister Riyadh Hijab],” wrote another critic, an employee of political consultancy iDiplomat. “Did we need westerners to meet #Assad personally to ‘verify’ what Syrians on both sides have been saying for almost 6 years?”

But, of course, the fact that many of the same people have been saying the same things for six years is itself a problem.

Former Prime Minister Riyadh Hijab defected in 2012, almost five years ago. He’s now among the leading partisans opposed to the Assad regime, and he heads an opposition political organ sponsored by Assad’s state enemies. I think Hijab is likely right on the regime. But he’s also not a disinterested observer, or one who can necessarily testify to current atmospherics inside Syria in 2016 and 2017. Hijab – either speaking directly, or as relayed by an employee of iDiplomat, a consultancy paid by the opposition’s Western state backers to advise the opposition – is not the messenger the opposition needs on the character of the regime. Not on his own, at least.

If the discourse on the Assad regime and the broader war is dominated by people who have approved, synchronous politics, who are paid representatives of the Syrian opposition, or who haven’t been inside Syria for years, it’s mostly just going to reassure and validate people who are already committed politically. It won’t be convincing for an unaffiliated, critical audience, and it will be less and less politically relevant.

I’m not going to begrudge anyone for taking work or foreign sponsorship where they can get it – everyone needs a living, and nothing gets done for free. But to make an effective and relevant case against the regime, members of the opposition also need to rely on independents who can credibly, personally attest to circumstances in Damascus and elsewhere in the regime-held west.

The alternative is, effectively, a blank space covering much of the country, onto which outsiders can project all sorts of unfalsifiable theories and narratives. Some of these suit the opposition, including the idea that the regime has dissolved into militia anarchy. Others do not, including attempts to romanticize the local “truces” and “reconciliations” the regime has imposed on broken and defeated opposition towns.

The only way to avoid this sort of mythologizing is to have people in regime-held Syria – with, realistically, regime permission – reporting what they see and hear.

There are limits to what journalists and analysts can realistically accomplish inside. There will be areas for which they don’t receive the relevant permissions to visit, people they aren’t allowed to talk to, maybe attempts at return visits that are denied. But reporting inside the regime-held west is worth trying. The alternative is an analytical and rhetorical dead end.