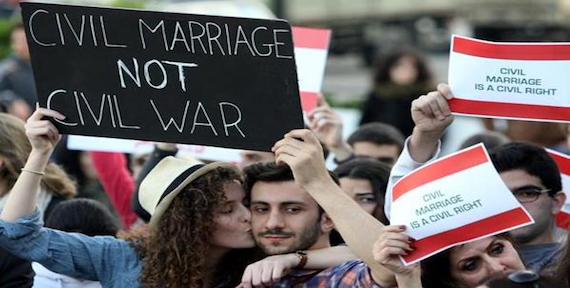 Since the first half of the 20th century when the French power aimed to introduce civil law regulating personal status affairs, up to this day, the debate on civil marriage in Lebanon is a present reality embodied by considerable civil marriages being carried abroad and an ongoing discussion regularly reactivated at the occasion of activist movements’ protests, political or religious declarations, or litigious cases making the headlines.

As part of the “sectarian”, “confessional” or “consociationalism” system, institutionalization of “the religious”, it seems, summons an “exceptional” reading of the Lebanese context. Early on, the sectarian regime and its adverse effects were to be denounced. This singled out sectarianism as a root cause of the state’s limitations, of a troubled national identity, or of political violence. Steadfast and vehement reactions to attempts at reforming sectarianism also revealed how threats to the prerogatives of religious leaderships prompted powerful defense mechanisms blocking alternative systems from emerging. The overwhelming construction of civil marriage as an offensive on sectarianism was demonstrated throughout the debate triggered by the 1996 Presidential attempt to reform the law, where El-Cheikh notes that “the voices of ordinary people were drowned out by the debate between politicians and clerics”.

The sectarian reading of civil law reforms is also to be found within academic discourse. As Aïda Kanafani-Zahar puts it: “It is by working on attempts at secularization, notably on the state’s incapacity to establish optional civil marriage and, as stated by the Taef agreement, to move forward to the abolition of confessionalism that we linked together personal status and political confessionalism”; it is the “articulation of the two”, she goes on, that constitutes “the specificity of the Lebanese communitarian body”. Another dimension of this singular treatment features an essentialist reading in the shape of a fundamental, if not cultural, blockage that prevents reform from passing through.

In 1920, France was allocated control over Lebanon under a new international legal formula, the mandate. The region was then administered along the rule set by Ottoman communalism, a sectarian pluralist system meant to grant legal protections to minority groups giving relative autonomy to religious establishments to rule their communities under their own laws, creating a dual system in force in Lebanon and Israel to this day.

The 1926 Lebanese Constitution further institutionalizes and reflects the relationship between the central State and religions in a national environment characterized by religious and legal pluralism (the central authority is not the sole legislator). Despite some secular elements (as the only Arab state not to have explicit reference to Islam as a religion of state or in its legislation, having freedom of belief as a cornerstone principle), secularization, surely, is incomplete insofar as it constitutionally lends parts of the jurisdiction to religious communities through a set of political, legal, social prerogatives (personal status, education, political quotas) that immediately contradicts some of the state’s own principle inspired by a secular and Republican leaning. The very ambiguity of the Constitution derived from the mandate’s own ambiguity: concerned with implementing a foreign rule premised on a legitimacy based on a commitment to protect religious minorities. This contradiction laid down the foundation for opposing, almost schizophrenic, visions and discourses on the nature of the State.

The French mandate was immediately faced with the need to manage religious communities under national territories. Because the Lebanese modern nation was created along religious considerations, communities and “modern” states were essentially connected. The mandate charter took over Ottoman principle of protection for religious minorities, including of their right for self-management of personal status affairs (Article 6). Yet the analysis of personal status reforms that started as part of a political, legal and judicial policy, cannot be dissociated from a broader mandate project. Although secularism was already introduced through Ottoman reforms (“tanzimat”), the case for a civil code in Lebanon stemmed from a French colonial project, a political vision that was best exemplified by the “French Secular Mission” (“Mission Laïque Française”), a state-sponsored educational network whose schools ambitioned to provide for a religiously neutral, secular education. Clear here is the link established between secularism, neutrality, unity, universality, science, objectivity, modernity, and centrality of the State. The pursuit of increased French influence by unifying the law while spreading the clout of secularism were especially reflected in reforms on personal status and in the introduction of civil marriage. A first project failed in 1924; it had ambitioned to cut down religious courts prerogatives. On April 28 1926, Decision No.261 enacted the first common civil law for all without religious distinctions, creating civil courts and reducing religious jurisdictions to marriage and divorce. Meant to be later completed, for the first time, by a civil marriage provision, it was however suspended following Muslim and Christian protests (the Patriarchs released a joint declaration and a commission of religious leaders unanimously asked for the law to be cancelled) rising up against reduced prerogatives and the first attempt to rule inheritance under a common law.

Religious opposition, following a large campaign, petitions, and political conflicts between the High Commissioner and local governments, forced to issue counter decisions (Decision No.146 of November 1938 and No.53 and 54 of March 1939), cancelling some of the contested provisions and which further resulted in the closure of the Lebanese Civil Status Bureau in 1939. This ended the possibility of a civil option for those who do not want to be affiliated with a specific sect under a common law. The outrage caused by successive decisions and controversial issues such as conversion, forced the mandate authorities to step back, marking the first victory of the collective rights of sectarian leaders over reforms for increased individual rights. Without proper unified civil personal status laws, be it an optional one, the right of those belonging to no religious community, as contained within Decision 60, remains a theoretical status short of practical implementation. Yet as an inception into the laws, public debate or minds, French policy to push reform towards secularism and civil law was here to stay.

Strategies Around the Law: Using And Filling the Legal Loophole

The approach taken on in Decision 60 is to introduce a path away from religious jurisdiction by creating, along religious ones, an additional non-religious national community – a “secular sect” option as the 19th officially recognized, entitled, community. Parts of personal status affairs could admittedly be ruled by civil laws designed for non-Muslims. But in matters subjected to religious rule, not belonging to a community amounts to relinquish civic rights (“capitis deminutio”), especially when considering political rights’ and its linkage to sectarian affiliation. Yet some legal foundations are laid down here that provide for – limited – scope for action by maneuvering around the law, as exemplified by individual strategies that give birth to an alternative reality in order to accommodate the law. Conversion cases or the routine business that flourished around civil marriages in Cyprus show how they have developed to become widespread practices19. They are motivated by personal convictions (to avoid conversion or for secular views) or interests (cancel duties from a previous marriage, benefit from inheritance laws of another community)20, and are premised on provisions that allow for some bypassing of religious restrictions (recognition of mixed marriages abroad, possibility to change religion). In 2013, discussions were reactivated by groundbreaking precedents of civil marriage carried under Decision 60 of 193621, with the support of civil society activists and amidst considerable, years-long national debate. In that context, voices for civil marriage put forward the existing right to implement a law already existing, if need be by resorting to foreign laws in its implementation. Decision 60, incomplete as it is, was also used by Minister of Interior N.Machnouk as the legal basis for denial of civil marriage because of the lack of legal framework to govern statuses that renders registration impractical.

“Decision no. 60 L.R. (…) authorizes the formation of communities subject to the common law. (…) They must submit to the government a regulation summarizing their religious and moral principles, as well as their organization, provided that it is recognized and put into force by virtue of legislative decision, which is yet to happen.”

Voices for reform, starting with the French, have designed ways to justify the introduction of civil marriage. As highlighted by a French diplomatic note of February 1936, provisions contained within Decision 60 of 1936 and 146 of 1938 are already present in the Constitution that foresees freedom of conscience, independence and equality of all communities, and respect of personal status. Lebanese politicians, such as Aziz el-Hachem, a lawyer and politician who drafted a constitutional reform bill that included a civil marriage option, took on initiatives during the mandate period. The continuity of these endeavors, embodied by optional civil code or independent initiative on civil marriage, as the 2013 Beirut Bar Association draft law on civil marriage, lays in their claiming to be premised at least partly on existing constitutional principles or legal provisions.

Relevant here is the sustained optional character of efforts towards civil marriage, including President Hrawi’s 1996 draft proposal, which mirrors a political will not to build a new order fundamentally against sectarian prerogatives, but beside them. It suggests an enlarged pluralist management of personal status, while building on the secular foundation of the State. Even though presented as such in the public debate, attempted reforms, by their optional and limited scope, were increasingly not conceived to contest constitutionalized protection of religions.