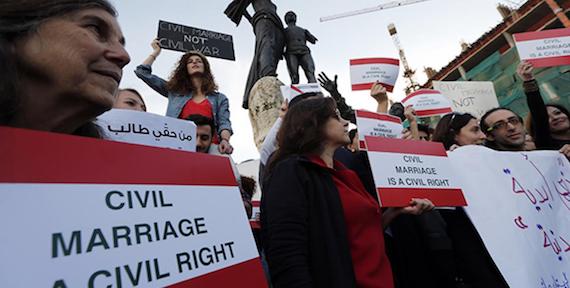 In the midst of the Lebanese civil war, a Christian  priest, the anecdote goes, reached out  to the  President  urging him  to  pass a civil status code to  remove the  identity  causing people to kill each other. This tellingly locates the peculiar environment  in which the idea of civil status  laws evolves in  Lebanon:  an  ancient  discussion  tinged  with  sectarianism  that isolates Lebanon  from  a regional  debate,  more  inclined  to  situate  the  issue pertaining  to personal status laws within  an egalitarian agenda, as tends  to be the  case in countries  like Morocco  where economic and social changes have encouraged the  development  of reforms prompted  by feminist movements.

Civil marriage also is a divisive issue in other countries, as in Israel, or in countries like Egypt where laws on personal status are promulgated by a unified central state – indicating that resistances to change might not exclusively rest on forces or sectarian arrangements  typical to Lebanon  as is often presented. Did a perceived “exceptionalism” of the Lebanese system develop so that the sectarian hold over public affairs hijacked the debate on civil marriage away from other  actors likely to frame the discussion away from sectarian preoccupations?

In an attempt  to single out what characterized Lebanese stalemates in reforming the law, we are interested in understanding  how and why the issue of civil marriage in Lebanon was historically commonly  taken  back  to  a  sectarian  context,  shaping  persistent rationale around the law that have endured in remarkably similar forms until this day.

Continuity in The Post-Independence Era

Many  attempts   at  reform  mentioned   previously share  a  certain  modernist discourse that increasingly links together national stability, unity, to secularism, civil laws and civil marriage. Despite the sectarian opposition mentioned, they were met with  enthusiasm  by a  part  of the  population,  notables, modernists,  liberals, and lawyers. After a halt in the pre-second world war period, efforts for reforms for national civil status law would resume shortly after independence, in the aftermath of national upheavals and the weakening of the Mandate power.

These projects were embedded into a common vision that saw the fragmented laws on personal status and its legal implications as negatively impacting the state’s jurisdiction and its sovereignty. Reform was meant to contain religious and political interferences, including transnational influences. By referring to foreign laws, whether through  religious  interferences  (Papal  encyclae, Fatwas indirectly  recognized  as binding), or by the direct implementation  of foreign laws in cases of civil marriage carried abroad (most controversial cases on divorce for marriages carried in Cyprus for which Cypriote law applies), the Lebanese state is de facto ruled by foreign laws. In addition to unifying the laws for all citizens, reforming towards civil marriage would be one step towards the application of constitutional provision that  grants all legal jurisdiction to the Parliament (Article 16).

Following  the   end   of   the   war,  attempts   at   reform   received  a   new understanding as calls for civil marriage were vested with a specific meaning, that of reunification. As established by the Taef agreement that was to put an official end to the  war in  1990,  reconciliation and  secularization were tied  together  as a stated national goal incorporated within the Constitution.  Within  that context, civil society movements developed and gathered around the  claim for “civil marriage not  civil war”.

The Failure of the Hrawi Project in Face of Religious Opposition

The  most  serious national  discussion on  reform,  remembered  as  the  Hrawi project, was justified as part  of constitutional  provisions introduced  by the  Taef agreement to end sectarianism. In November 1996, President Elias Hrawi introduced a new bill, ambitious in its scope: an optional code on civil personal status, that is the option for citizens not to be affiliated with a specific sect, while proposing a set of laws regarding  different  areas of  personal  status,  including  a  provision on  civil marriage that  would govern “non-sectarian citizens”. Although only an option and partial in its scope, the civil code would have paved the way for more equality in treatment  between genders and sects, and was defended as such by its proponents (banning of polygamy, divorce by mutual consent, intermarriage etc.).

The  fact  that  the  bill  was  announced  on  Lebanon’s Independence  Day  is indicative of  a  political will to  situate  the  reform  within  a  context  of  national reconciliation and an understanding of the need to gradually overcome sectarianism. As encouraged to do saw by the Taef agreement, the state was to be given heightened importance as a unifying force, being understood that the rapid collapse of the state in the  aftermath  of the  first events of the  war only further  accelerated paralysis and bugging down into the war. The official announcement  was showing dedication to the national cause, also bespoke by its ambition reflected by the large scope of the legal blueprint.   In justifying the legitimacy of the law, Hrawi also mentioned that 22% of marriages were being carried abroad, a number whose consequences in terms of laws to  be  applied were a  breach of the  state’s sovereignty. In  addition,  the internationalization of the year-long controversy on the bill, with Saudi Arabia issuing official statement and Hafez el-Assad stepping in in support and then  against the bill, shows another dimension of how the project in itself was a matter of national sovereignty.

Despite the approval in March 1998 of the highest executive body, the Council of Minister, Prime Minister Hariri refused to sign it. Following a strong national debate on attempts at westernization and a unanimous rejection by religious authorities, the bill was blocked and further withdrawn. Intimidations  went through  threat  to the resurgence of violence as President Hrawi was accused of reviving sectarian conflict.

Religious condemnations included issuing threats of excommunication and that children  of civil marriage would be deemed illegitimate, accusations of apostasy, calling for jihad against the proposal, and condemning it as a Western, Zionist and masonic  plan. At a time were Lebanon was still military occupied by Syrian forces, a part of the Lebanese human rights movement also accused the bill of being a Syrian plan to divide the country.

This resilience of sectarian counter-arguments in the successive review of aborted reforms invites to further look into inner mechanisms and circumstances that  have allowed this position on what the law ought to be to impose its normative discourse throughout the years.

The Constitution and Continuity of a National Sectarian Front

The gradual institutionalization and continuity of a national religious front, as a recurrent obstacle against reform for civil marriage, ought to be read within the historical context of transitioning between Ottoman  ruling, the Mandate power and the independent state.

The  progressive empowerment  of  communities  followed  the  fall  of  the Ottoman   Empire,  which  established  their  positions  as  a  central  component  of administration, and their subsequent internal adaptation to national contexts. What was  initially  meant  as  a  set  of  protection  for  non-Muslim   communities,  later translated  within  the  Lebanese  context  as  the  general rule  for  all communities. Religious leaders were encouraged to claim official recognition as historical communities. This was rooted in the idea that each community represents a nation in itself, endowed with its own laws ruling over its society. With Decision 60 of March 1938, eighteen communities were officially recognized and together with the Sunni adaptation to the national context (renouncing of dominant position, becoming one minority  amongst  a  nation  for  all minorities),  this  will give reality to  a  certain unification of the interests and positions of the various communities in Lebanon – in stark  contrast  with  Syria, where  Sunni  prevalence and  non-recognition  of  some minorities resulted in strong divergences between sects.

Since then, personal status laws have represented a strategic point used as a guarantee  through  which  they  were able to  control  human  and  material capital, namely their  physical goods,  finances, and  own  continuity.  This  translated  into matrimonial, inheritance, and wakf matters, issues more largely comprised under the laws of  personal status  that  enabled  to  “not  exchange women” and  to  “control matrimonial alliances”.

Religious opposition,  initially constituted  against the  Mandate  power, also included opposing the local government, and this even when the latter was favorable to them (as for the E.Eddé  government towards Maronites). The need to organize further triggered a centralization of religious institutions around the capital (leading leaders from Tripoli to request inclusion within Beirut-based institutions).

Yet  sectarian  institutions,  for  all  their  legal  and  political  arsenal,  were sustained by and found an undeniable echo through  their  social constituency and enduring sectarian identifications35 which imply to consider the need to reform the minds before the texts (“an-nufus qabl an-nusus”), and to reflect on the sectarian grasp over educational institutions.  Despite  the  tangible  development of civil society organizations pushing for secular reforms and individual human rights, social resistances still represent the organic reality of sectarianism. The fact that not only individual rights but also the very existence of sects is at stake in the discussion shows the  social attachment  to  the  practical dispositions contained  within  the  sectarian system and explains that liberal, secular values might sometimes coexist and conflict with concerns for the safety of the sect, prioritized according to the broader climate likely to trigger fears impacting on the support for reform.

Since early decrees were imposed by the French mandate as part of a colonial strategy, up to post-independence resurgence of pro-civil marriage movements, the Hrawi project and post-civil war growth of civil society activism, successive attempts at reform were undeniably penetrated by modernist ideals.

The most recent attempts at civil marriage were in direct line with 1936 French mandate  decrees perceived as “more advanced and  open  than  the  ones  adopted nowadays”. A liberal and national argument also reflected by the feminist discourse: the President of the Council for Lebanese Women,  Linda Matar,  talks of current practices of marriages abroad as “hurting  our governments and laws”, and future reforms on laws meant to aspire to the ideals of “freedom and democracy”.

In  addition  to  a  reflection  on  how  to  strategically overcome the  dominant sectarian paradigm, one should also consider the context of action. Political elites, in their   majority,  displayed  a   double   attitude   regarding   the   move  away  from sectarianism, taking part in the discussion to reduce sectarianism, while maintaining inherent  ties  with  religious leaderships. This  highly  fragmented  support  of  the political class, the week presence of women and women’s agenda on to the political arena43 indicate that  a revival of independent political parties, women participation, and strong political support to reforms seems necessary to renew the terms of the debate and crystalize sufficient support to counter sectarian arguments.

ASSAF, G., ‘Reform from the bottom: How judiciary, civil society can loosen the sectarian grip from Lebanese citizens’ The Daily Star (1 October 2009)

EL-CHEIKH, N.M., ‘The 1998 proposed civil marriage law in Lebanon: the reaction of the Muslim communities’ (1998-1999), 5 Yearbook of Islamic and Middle Eastern Law

MAKDISI, U., The Culture of sectarianism: Community, History and Violence in Nineteenth century Ottoman Lebanon (University of California Press 2000)