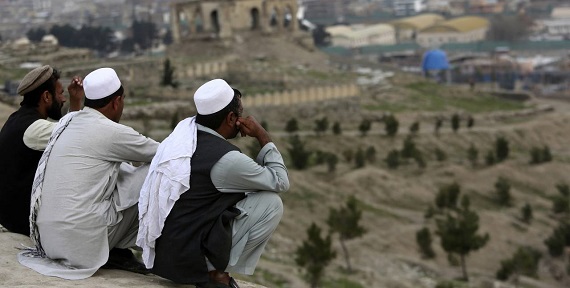 A few weeks ago, the United States dropped its biggest, non-nuclear ordnance –the so called “mother of all bombs”– on eastern Afghanistan. Or, to be more precise, it tested the bomb with the perverted name for the very first time in combat. In fact, the MOAB is an actual weapon of mass destruction. Its aim is to destroy and kill as much as possible. Had it been dropped over New York City, for instance, the entirety of Manhattan would have been destroyed. It seems, however, that as long as it is dropped somewhere in Afghanistan, nobody really cares. Although the monstrous strike appeared in some headlines over the first few days, it has already been forgotten and suppressed today.

Who has been killed? What has been destroyed? What are the impacts of the bombing in the region and its environment? All of these questions have not only gone unanswered, but they appear to have not even been posed at all. Live news coverage and in-depth victim stories seem to be reserved only for events in the West.

The reality in Afghanistan often proved that civilian casualties are inevitable after airstrikes take place. This is especially the case after such a monstrous strike. One would expect more details being provided than what Afghan government officials offered. According to them, about 90 IS militants have been killed by the MOAB, but no civilians. In this context, the silence of the main culprit –the United States– is setting more than a pattern. Until now, the Pentagon did not make any detailed statements on the strike’s aftermath. To them, it seems, any kind of casuality simply does not exist. The one and only statement which has been made is that “IS tunnels” in Achin district, Nangarhar province, have been successfully targeted.

Afghans in their home country, as well as those in the diaspora, reacted very critically to the strike. Several demonstrations took place inside and outside Afghanistan. The reason for their outrage was straightforward: Many Afghans notice that their country has become a playground for Western weaponry. They also know that those in power are free to kill and destroy without facing any type of scrutiny or consequences.

This is part of the reality in Afghanistan, not just since the drop of the MOAB but, in fact, since the very first day of the NATO occupation of the country.

On October 7th, 2001, another weapon was used for the time in combat: The weaponized drone. The supposed target of the murder machine was then Taliban leader Mullah Mohammad Omar. A compound in the southern Afghan city of Kandahar was targeted with Hellfire missiles. Dozens of people died in the fire. All of them, for the first time in history, were killed remotely. The Taliban boss was not amongst them, however.

Today, we know that Mullah Omar died more than a decade later, and of natural causes. Meanwhile, the people who died in his stead on that day in October are still completely unknown. Their names and stories remained in the dark. Like countless other Afghans in the following years, they remained faceless and invisible victims.

This has become a common theme of the “War on Terror” in Afghanistan, especially after the introduction of drone strikes. The recent drop of the MOAB is just another peak. In this context, it is also notable that, according to the UN, civilian casualties from aerial operations in Afghanistan increased by 341% in comparison with last year. Additionally, more than 600 airstrikes –at least 239 of them by predator drones– have hit Afghanistan since Donald Trump took office.

Other weapons have also been tested on Afghanistan’s civilian population. A good example is the use of uranium ammunitions by NATO forces. Most people in the Western world might have never heard of it, and for good reason. The pictures of the victims of these brutal war crimes barely reached mainstream media outlets. Western war crimes still do not fit into the narrative to which many people are brainwashed into subscribing.

To encounter this narrative, it is important to not consider all these events simply as isolated and separate from each other. By merely facing the total picture, the complete systematization and unscrupulousness behind these crimes become evident. However, this picture was not just created yesterday; it is the result of a decade-long, political and military abuse of an oppressed population. For that reason, Afghanistan’s dystopian reality on the ground, and what the West is doing there, is worthy of far more than a side note on daily news coverage.