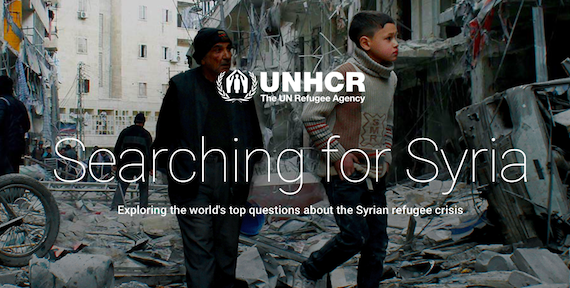 In early 2016, during a ceremony by the National Commission for the Syrian Science Olympiad at the Opera House in Damascus, Mrs. Asma al-Assad gave an enthusiastic speech about the progress of the educational initiative she has sponsored since 2006, concluding that this progress inspires optimism and shines a light into the prevalent darkness. Thanks to her vaunting phrase “Look where we were, and how far we’ve come,” footage of that speech went viral. The phrase was subject to many satirical videos that ridiculed its rosy rhetoric and willful indifference to the disastrous reality of millions of Syrian children, who are deprived of science and scientific Olympiads, let alone the very basics of decent life.

A few weeks ago, the UN High Commissioner for Refugees (UNHCR) decided to “search for Syria” through a website developed in partnership with Google. After an introduction to the supposed situation in Syria before “the war,” it starts providing figures on the suffering of the Syrian people and the extent of devastation that has befallen their country over the last six years. A visually impressive website, Searching for Syria appears to be searching for the same Syria that Asma al-Assad, Rami Makhlouf and the rest of the “Syria Holding” kleptocratic society are similarly lamenting. The first few slideshows reference a formerly vibrant country, where “[m]any led lives similar to people in other developed countries – with music, fashion and sport among the most popular pastimes.”

The first section, which is supposed to tell us what Syria looked like before “the war,” concludes by referencing 2010 top searches in Syria: Arab Idol, Bodybuilding, Summer Fashion, and Miley Cyrus. In its fervent searching, the UNHCR did not come across any information about the numerous websites that were censored in that year, including Facebook, YouTube and Blogspot (two Google-owned services, by the way), not to mention other forums and websites belonging to Syrian and international human rights organizations, in addition to any Syrian opposition webpage of course. Neither did the UNHCR find that international organizations concerned with freedom of expression, such as Reporters Without Borders, have repeatedly placed Syria at the lowest ranking according to freedom of the press, freedom of expression and access to information, alongside the remaining “honor roll” members at the bottom of the list: Burma, Laos, Sudan, North Korea, Saudi Arabia, Libya, Iran, Cuba and Somalia. The UNHCR failed to find the names of dozens of journalists, bloggers and ordinary citizens who were imprisoned on charges relating to writing or online activity, under absurd legal articles such as “the dissemination of false news that undermine the spirit of the nation and weaken national sentiment” (Syrian Penal Code, Article 286). Some of these prisoners received sentences of up to seven years.

In 2009, for example, Syrian authorities arrested Tall al-Malouhi, an 18-year-old female Syrian blogger. Her whereabouts have since remained unknown, with no concrete information beyond speculation and rumors.

Following this piece of information about the top 2010 searches, the website continues shedding light on the reality of Syria before “the war,” emphasizing on Syria’s status as a center of art and culture since 3,000 BC, referencing the honoring of Damascus as the Arab Capital of Culture in 2008, the concert by British band Gorillaz at the Citadel of Damascus in July of 2010, and the flourishing tourism sector throughout the 2000s. It invites us to meet Nadia, whose family owned an orchard of fruit and nut tree.

Additionally, the website goes on to explain that videos of FC Barcelona were popular on YouTube among Syrians. The fact that YouTube itself was officially blocked in Syria, and that those wishing to access it relied on proxy and VPN software, simply goes unmentioned.

With the exception of Nadia, it appears that the UNHCR did not find in Syria before “the war” but an upper-middle class living across the wealthy neighborhoods of Damascus, attending Gorillaz concerts and enjoying five-star summer resorts under the patronage of crony capitalists. Is it impertinent to ask the UNHCR to check out the data of other UN institutions to arrive at a somewhat different reality from this sham rosy one? Perhaps they could present information more relevant to far broader segments of the Syrian population. I will mention, at the risk of audacity, two examples of where such data could lead.

In 2010, a National Housing Strategy draft by the United Nations Human Settlements Program (UN-HABITAT) stated that informal housing in Syria has increased by 220% between 1994 and 2010. Three years earlier, the official Central Bureau of Statistics had detailed some of these figures in 2007, indicating that 50% of the housing in Syria is ghettoized, and that 45% of the residents of Damascus live in shanty towns, which applies to 35% of the residents of Aleppo as well. If we compared the maps of these slums to the maps of the areas most exposed to barrel bombing during the years of “the war,” we would find an almost perfect match. These areas, much like the barrel bombs, are apparently outside the scope of the UNHCR’s “searching.”

The other example, which is related to the first, is the socio-economic catastrophe that hit the Jazira region between 2006 and 2009. Back then, harsh government measures towards agricultural and livestock sectors –in the context of the “liberalization” of Syrian economy– coincided with severe drought. Those measures had been favorable to the interests and aspirations of the ruling oligarchical class, focusing in its “reforms” on incentivizing private agencies, banks, insurance firms, holding investment companies, real estate ventures and luxury tourism projects. It was a perfect opportunity for a nascent kleptocracy to invest its outrageous wealth pillaged over the past decades, then concentrated in the hands of the sons of former officers and government officials. Before becoming a household name in the halls of the UN and World Bank, the then Deputy Prime Minister for Economic Affairs Abdullah al-Dardari had overseen the implementation of that “social market economy.” During his tenure, subsidies on fuel and feedstuff were lifted, which resulted in the effective doubling of their prices, leading to a fatal blow to agricultural activity and livestock breeding – according to UN figures. It should be noted that al-Dardari was recently appointed in an Advisory position in “reconstruction,” after serving as the Deputy Executive Secretary of the United Nations Economic and Social Commission for Western Asia (ESCWA).

The disastrous consequences of these economic policies have affected all Syrians, but they have been particularly detrimental to the drought-stricken Jazira region, notably because of its deficient non-agricultural economic infrastructures. In the governorates of Hasakah, Deir ez-Zor and Raqqa, more than 130,000 citizens were directly affected, and more than 80,000 lost their entire livelihood. Tens of villages and towns in these three governorates were completely desolated. Tens of thousands of their population moved into the poverty belts of Damascus and Aleppo, seeking refuge in tents, shanty towns or hastily built dwellings. The UN is certainly aware of this catastrophe, and the figures and data pertaining to the aid and food baskets distributed through its organizations are still available. By the way, government and party officials in the three governorates of Jazira shamelessly participated in distributing these aids as if it were in-kind prizes or royal largesse granted on a national holiday, all covered by the state media and kept in Syrian News Agency (Sana) archives – albeit less glamorously than the pictures and videos of the Gorillaz concert at the Citadel of Damascus.

The reconstruction about which Abdullah al-Dardari is occasionally consulted is initiated by research that is not very different from the UNHCR’s oblivious search “for Syria.”

After a proper introduction to the “pre-war Syria,” the website moves on to another section entitled “What is going on in Syria.” It begins with the UN High Commissioner for Refugees, Filippo Grandi, stating that the Syrian crisis is “[t]he biggest humanitarian and refugee crisis of our time.” It then briefly elaborates by saying that what began as peaceful protests in 2011 quickly spiralled into deadly conflict. In light of what was just mentioned about the wonderful pre-war situation, and without any further explanation regarding the se “peaceful protests,” a visitor who is unaware of Syrian affairs, for whose sake the website was supposedly built, would not understand the reasons for these protests. Against whom? Against Nadia, whose family owned an orchard? Or against another family who assumed to own a farm spanning an entire country, with the majority of its population treated like serfs? Neither in the “historical” background nor in the “What is going on in Syria” section would that visitor find any reference to the reality of freedom and democracy in the country, to pillaging, to repression and arbitrary detention, to the deteriorating conditions of the working classes.

The website then moves to show a chronometer that displays not only the years and months for which the war has lasted, but it extends to days, minutes and seconds! How could the UNHCR determine precisely at what exact second the “deadly conflict” began?

The subsequent slides are intended to present figures and information about the magnitude of the urban and humanitarian calamity that has struck Syria. Such figures and information are important and daunting, but completely devoid of any context, as if the victims were claimed by a hurricane, an earthquake or a flood. There is no reference to chains of culpability, nor to systematic and intensified bombardment of civilians, nor prisons and death under torture, nor massacres, nor forced displacement.

The following section begins by defining a refugee, with an elaboration of the scope of Syrian displacement. However, the website is quick to “reassure” us that a large portion of Syrian refugees are educated with professional backgrounds. Among them are web developers, microbiologists, and athletes such as Yusra Mardini. Then returns the High Commissioner, Filippo Grandi, with a reassuring quote that the net contributions made by Syrian refugees to their host communities have always been positive. The section concludes with a statement that many refugees have achieved amazing things… such as Einstein!

The next section denotes the destinations of Syrian refugees, primarily the neighboring countries. It delves into detail, arguing that a majority of Syrian refugees have resettled in urban areas rather than refugee camps, before quoting King Abdullah II of Jordan: “When a mother and child come across the border, what are we supposed to do?” No response is given to His Highness. The search for an answer in the daily life of Syrian refugees in Jordan, or of those stranded in Rukban refugee camp, does not fall within the scope of “searching for Syria.”

In its fifth section, the slideshow concludes with an invitation to those who “found Syria” to contribute to the assistance of Syrian refugees through donations, advocacy or volunteering.

In protest against the narrative perpetuated by the website, Syrian activists and civil society organizations sent a letter of protest to the High Commissioner, Filippo Grandi, which was then opened to signature on Facebook.

Well, at least the website did not tell us that Syria had such a young leader, who was educated in the West and speaks fluent English – as Western media outlets have been reminding us over the past years. Nor did it congratulate us on the great achievements of the First Lady in civil work, development projects and the promotion of science and innovation. They did not reach this extent, although it is difficult not to be reminded of the discourse behind “Where we were, and how far we’ve gotten” when browsing Searching for Syria. In fact, it would be more appropriate to borrow another quotation from another “remarkable” leader, Muammar Gaddafi, when he famously exclaimed: “Who are you?”