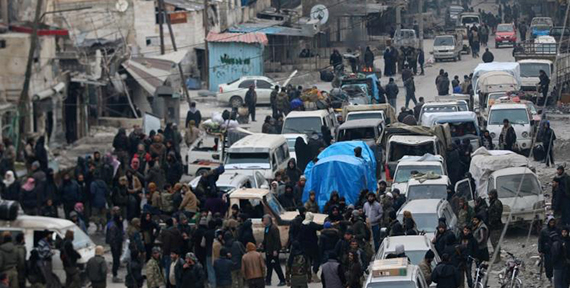 They were the world’s top story less than a year ago. Today Aleppo’s displaced are already forgotten.

Hundreds, if not thousands, of photos and videos documented the humanitarian catastrophe endured by the people of eastern Aleppo last year. At the time, the footage spread like wildfire, first in major local media outlets, and from there to Western and other international media.

Syrian opposition-aligned media outlets played a significant role in reporting the suffering and calamity that befell the people of Aleppo. Solidarity protests around the world, especially in Turkey, were also thoroughly covered, sometimes even broadcast live, not to mention the online campaigns which condemned the crimes committed by the Syrian regime and its allies, notably Iran and Russia, against civilians in eastern Aleppo.

This significant shift in the work of Syrian opposition-aligned media, however, and its coverage of field developments throughout the country six years on from the outbreak of the anti-government movement, poses numerous legitimate questions about the mechanisms through which events were being reported, and whether the first priority should be to influence local and global public opinion, or rather to convey the realities on the ground with full objectivity and professionalism.

“I wished this could all be a nightmare”

According to the International Committee of the Red Cross (ICRC), some 35,000 residents of east Aleppo were evacuated from the city after the end of fighting in December 2016.

“The civilians who wished to leave were evacuated to safer places,” said Ingy Sedky, the ICRC spokeswoman in Syria. “Those who refused to leave were allowed to stay, as stipulated in international humanitarian law. Evacuation must be carried out in accordance with the wishes of civilians and the injured themselves,” she added to Al-Jumhuriya.

Before relocations began in mid-December, Syrian media activists inside the besieged parts of Aleppo strove to meet their duty to the fullest extent, posting hundreds of photos and videos on their social media profiles and personal pages, demanding an end to the bombardment of civilians. They also released numerous video statements, in both Arabic and English, calling on the international community and the world at large to mobilize and stop the frenzy of bombing, and to salvage the civilians who remained besieged and beleaguered.

Images emerging from Aleppo promptly made their way to the front pages of international newspapers, and became the talk of leading news agencies. They depicted the weary faces of families and their devastated homes, their torn and hastily-packed bags, which only had room for a few personal effects, and much sorrow and heartache from their last days in Aleppo.

“The moment I left Aleppo was very bitter indeed. I had never stepped foot outside of my hometown before,” said Hassan Qattan, a photographer from east Aleppo who witnessed the people’s calamity and gave an account of it.

“I wished this could all be a nightmare, not a tragedy I was living.”

Along with a group of photographers, Qattan documented “the tragedy of our age,” as he describes it. Among the highlights of his work was a contribution to The White Helmets, which famously won an Oscar for Best Documentary (Short Subject) last February—an achievement that left him with mixed emotions.

“Yes, we won the Oscar, but we lost our city, which denied me the joy of being awarded such a prize […] To be honest, I still choke up whenever I recall the moment of my forced departure from Aleppo. Every time I try to be cheerful, I’m overcome by the feelings of sorrow and subjugation.”

For all the coverage Aleppo received in 2016, in 2017 the media abruptly began ignoring the suffering of Aleppo’s displaced, according to Firas Dibeh, a journalist from the city. He attributes this to “media priorities of covering ‘hot’ topics, a phenomenon which applies to all Syrian developments in general, not only the Aleppo displacement.”

“The media generally opt to cover political and military developments at the expense of humanitarian issues, except in cases where a humanitarian issue is novel and in its early days,” Dibeh told Al-Jumhuriya.

Qattan concurred, saying, “The humanitarian-focused media coverage was an expression of sympathy, lasting for two or three days at the most, and while timely at first, unfortunately it soon receded.”

In an effort to recapture fleeting attention spans, Qattan resorted to inventive new methods of documenting the fighting; all ultimately to little avail.

“I tried several ways to photograph the destruction that plagued the city and the homes of civilians, using a drone-mounted high-resolution camera,” he told Al-Jumhuriya. “I had hoped this would change the political trajectory in some capacity, or stir international public opinion, but no such thing transpired, unfortunately.”

Reduced to numbers, or less

In Dibeh’s view, this media neglect is only getting worse. “Unfortunately, Syrians have become but numbers to be cited in the media. Sometimes even the numbers go unmentioned. The greater Syrian issue, the humanitarian issue, is thus sacrificed at the altar of political, military and economic angles.”

Moreover, the mode of displacement witnessed in east Aleppo—which saw most residents moved to Idlib and its countryside; the western Aleppo countryside; or the regime-controlled western half of Aleppo city, whence they have been prevented by the regime from returning to their homes—has been replicated in many other Syrian cities and towns.

To wit, earlier this year, a new displacement in Homs’ al-Waer district took place. One batch of al-Waer’s displaced population was taken to Jarablus, near the Turkish border, followed by another batch destined for Idlib. In April, a major transfer of tens of thousands of Syrians known as the ‘four towns agreement’ took place, moving residents out of opposition-held Zabadani and Madaya in exchange for the departure of inhabitants from pro-regime Fua and Kefraya. Similar scenarios had also played out in Darayya, al-Tall, Baba Amr, and various other cities and towns across the country.

These relocations were never expected by the inhabitants of these besieged areas, and they wished it was only a passing nightmare. But alas, it was bitter reality. Many moved into refugee tents, through which the cold winds pierce their bones and exacerbate their pain, with the media and the world caring only briefly, if at all, about their suffering.

Despite—or perhaps because of—the calamities and setbacks of the recent bloody and cruel years, experienced on a daily basis by Syrians across rebel-held areas, opposition media has an obligation to take the initiative and battle against the neglect of victims and their disappearance into oblivion. This can be done by highlighting humanitarian stories, especially after the heat of the military developments recedes, and by employing new media tools to convey the suffering of Syrians, which will persist at least as long as the flames of war are alight.