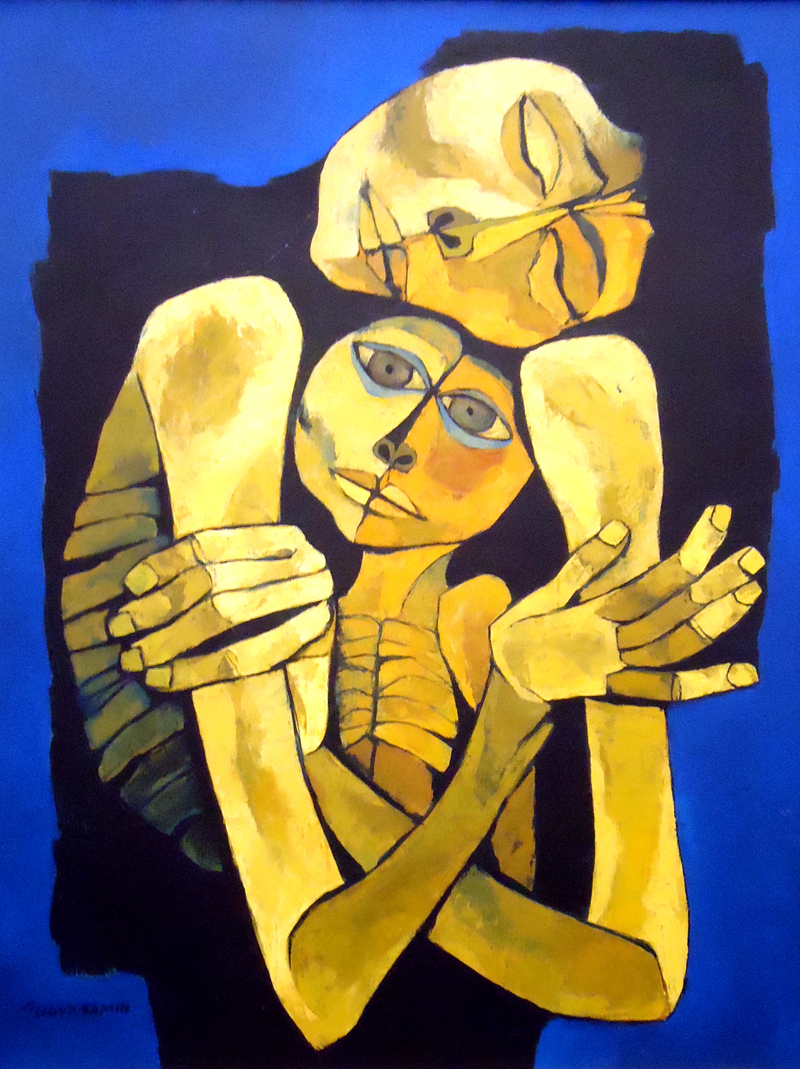 At a recent talk in California, Charles Davis encountered a microcosm of the left’s rupture on Syria.

Geography is destiny in a world driven by the logic of capitalism and the reality of borders. Where one is born doesn’t quite dictate an outcome, but statistics can tell us what is likely and what is not. Some people, objectively, are worth less; capitalists and consumers tolerate a level of violence in some areas that would be intolerable in others. The tragi-comedy that is that some who claim the most scientifically empathetic politics betray their stated principles as a romantic deception, defending that abroad which would never be tolerated at home.

A superficial anti-West posture justifies this: a bleeding heart for some, a slap from a bloody hand for others, imperialism (or “anti-imperialism”) the arbiter of who’s awarded humanity and who gets theirs denied. Left or right, neoconservative or neo-Ba’athist, it’s always the suffering of others that’s reasoned to be a necessary sacrifice for progress or law and order. Grand things between major powers are going on in these other places that demand unsentimental logic, socialism and security both requiring barbarity, abroad.

“The most dangerous thinking is Manichean, the thinking of the binary,” said Yasser Munif, a Syrian activist and professor at Emerson College, during a September 23 discussion on capitalism and mass incarceration put on by the Los Angeles-based Coalition for Peace, Revolution and Social Justice. Anything can be tolerated when complicating factors like real human beings are erased, systemic atrocity made good or bad depending on which side of the ledger the perpetrator has been listed.

There is an alternative. “Think beyond the binaries,” Munif said, “and listen to what people want.”

Founded in the summer of 2017, the coalition has a stated aim of challenging U.S. capitalism and Western imperialism without allowing other capitalists and imperialists, or their allies on the left, to claim ownership of resistance. The Black Rose/Rosa Negra Anarchist Federation-Los Angeles and the local chapter of the Socialist Party are founding members.

Munif, talking via Skype to an all-ages crowd of 60, continued in the same theme as the speakers from Black Lives Matter and the prison-abolitionist group Critical Resistance, detailing the horrors that face about 100,000 people behind bars in Syria, many of whom are political prisoners—communists and socialists and reformists. Rape and torture are systemic; guards abuse the inmates and force the inmates to abuse each other; life and death are arbitrary, with those released broken inside.

“Humiliation and shaming was and is still an essential part of the Syrian prison system,” Munif said. Most who escape it are unwilling to talk. And that’s just “one strategy of violence among many others” employed by the state.

The Syrian state, though—that’s the source of controversy, the left having a different, strategic take on state violence over there, answering George W. Bush’s “axis of evil” with the commensurately vulgar “axis of resistance;” that resistance justifying the boot in the face or electrode on the genitals.

A lot more than that, actually. Just north of Damascus, the heart of resistance, blindfolded prisoners at Saydnaya military prison are hanged en masse, 20 to 50 at a time, following a trial that lasts no more than three minutes. Their bodies (between 5,000 and 13,000 so far, according to Amnesty International), are dumped in a mass grave. As many as 20,000 of the estimated 100,000 prisoners in Syria are currently imprisoned there; some will be killed simply to make room for others, and, in the absence of any international pressure, this will continue should peace ever be imposed.

A July 2017 report from Lawyers and Doctors for Human Rights (LDHR) details the alleged treatment arbitrarily detained women have received in these prisons. The stories are consistently horrid: prisoners are beaten with cables, stripped naked and hung upside down, while threatened with sexual violence by their interrogators. One woman recounted having her fingernails pulled out.

One of the prisons is known as The Palestine Branch. There, women interviewed by LDHR recalled seeing emaciated men in the hallways, being led to chambers where they would be tortured to death. “[I] will never forget how the jailers were dragging the dead bodies,” a former prisoner said.

“You are stripped of your feelings and turned into an animal who is only allowed to eat and drink,” a Palestinian activist imprisoned by the Assad regime told The Electronic Intifada’s Budour Hassan. “Even sleep is only permitted by a military order.” And all justified in the name of national liberation. “That’s the most painful thing: being tortured in the name of Palestine.”

It’s painful, also, to witness defenses of torture from those who stand in solidarity with the victims of state terror, from Ferguson to the Occupied Territories, with important exceptions on the periphery.

During the question-and-answer session in Culver City, one young man got up and thanked German Gallardo, a speaker from the prison-abolitionist group Critical Resistance, for beginning his talk by noting “the effect of the system on everyone” from mass incarceration. But he didn’t buy other speakers’ claims that he stands to be affected by the triumph of carceral neoliberalism elsewhere.

“I kind of want to push back […] on the Syria thing,” the man started. “I understand that Assad is a dictator or, for the most part, he’s repressive—he’s running a repressive government. But I think Syria is under siege,” he said. “It’s hard for me to be like, ‘Assad is terrible,’ when we’re actively helping destabilize his government.”

The reality is the United States is fighting a war on terror in Syria, and not against the Syrian government. Its airstrikes have killed scores of Syrian civilians since they began in 2014, and the rate has increased since Donald Trump became president. This intervention complements Bashar al-Assad’s own war on terror, the logic and rhetoric of which echoes that of George W. Bush, with whom he worked. “If you want them to be tortured,” former CIA agent Robert Baer once explained, “send them to Syria.”

A decade later, a legacy of the Iraq war is that the ‘realist’ imperialism of stability-by-dictatorship is enjoying a pan-ideological resurgence.

“According to the Global Peace Index,” the skeptic continued, “Syria is actually the most violent state. So I’m saying: imagine any of you being in charge of that and trying to have a democracy. It’s just impossible. Plus the White Helmets. I mean, there’s so much there. Eva Bartlett, etcetera.”

There is, also, so much more tolerance for the logic of state violence, in all its barbarity, when it is deployed against people who have not yet won their right to solidarity—a privilege one earns by being useful to the simple arguments or fashionable aesthetic of a leftist in the West.

“For them the geopolitical lens trumps any other reading,” Munif told Al-Jumhuriya English when asked about the exchange. And even that simplified reading is wrong, he contested. “The Syrian regime has shown time and again that it’s willing to work with anyone—Turkey, Israel, the Gulf, or the U.S., and different kinds of fundamentalist groups—if it helps it stay in power.”

Read out of Syrian history is those who ought to be heroes to prison abolitionists and other leftists in the West, like Omar Aziz, the anarchist thinker whose ideas spawned local coordination committees, the experiments in direct democracy back in 2011 that so threatened a regime premised on the claim that it alone could provide security, and only by denying the people their say. Aziz, like tens of thousands of other revolutionaries, died in a Syrian prison.

In his remarks, Critical Resistance’s Gallardo had noted that, in the United States, “we have used incarceration very strategically to subtract the people we don’t want.” That this might be the case in Syria—progressive alternatives to the Assad regime systematically hunted down and removed from the civilian population—is one of those things, even if true, some would strategically decline to admit.

“These leftists have no interest in knowing more about grassroots movements and struggle,” Munif noted. But the struggle continues, against all odds.

On the eve of the panel, Syrian-American journalist Halla Barakat and her mother, Syrian activist Orouba Barakat, were murdered in their Istanbul apartment. They were reportedly investigating torture in Syrian regime prisons and, according to the Committee to Protect Journalists, “had received threats on social media and email from supporters of the Syrian government.” A relative of Orouba’s, Ahmad Barakat, arrested by Turkish authorities Saturday in connection with the crime, was accused by the victim’s sister of being an Assad regime agent.

The Barakats’ was the sort of work that’s inconvenient for some, geopolitically; some prison abolitionists embracing law and order for others, in solidarity with the states brutally imposing it.

One Syrian revolutionary, Bassel Khartabil, attracted an international solidarity campaign, but it was led not by leftists but by civil liberties groups such as the Electronic Frontier Foundation, with whom he had worked; the Syrian regime informed Khartabil’s wife in August 2017, five years after he disappeared, that he had been executed—another progressive Syrian killed as part of what the United Nations has termed an extermination campaign. Few in the West may defend it, but on the left more would argue against talking about it, a fear of regime change requiring the complicity of silence.

But anyone who thinks the victory of Ba’athist-fascism over there will not impart lessons to fascists elsewhere should remember their Karl Marx, counseled Frieda Afary of the Alliance of Iranian and Syrian Socialists.

“Marx,” she reminded the audience in Culver City, “thought that capitalism, by bringing workers together, would create national and international solidarity among them to uproot the capitalist system and replace it with a humanist alternative.” But Marx also knew solidarity among the oppressed would face obstacles, including division sowed by prejudice; Afary argued a prejudicial left is itself a roadblock.

“In 2017,” Afary said, “as we confront authoritarian capitalism […] we also need to acknowledge that many socialists have contributed to the impasse that humanity faces today. They have reduced socialism to one or another form of state capitalism. They have defended totalitarian states, and have more recently sided with authoritarian rulers such as Assad or Putin in the name of anti-imperialism. In doing so, many socialists themselves have become the expression of the logic of capital.”

The Russian revolutionary Voline identified this tendency as “red fascism,” its practitioners speaking the language of liberation as they defended a mass murderer’s prison camps, the proletariat in whose name their politics were avowedly defined made subordinate to the perceived geopolitical needs of a ruling elite. But the means are the end itself, not just the means to it. Brutality that leads to victory is not then abandoned for a gentle peace, nor are its lessons lost on a planet that allowed it to transpire.

An injustice anywhere is a lesson for power everywhere: look what one can get away with—and who will defend it. The most powerful people in Syria are getting away with it all, and there are those who purport to be against everything they are doing that have chosen to defend it. The whole world is watching, if not implicated, and the powerful and powerless alike have received an education. The left across the globe should fear what it is.