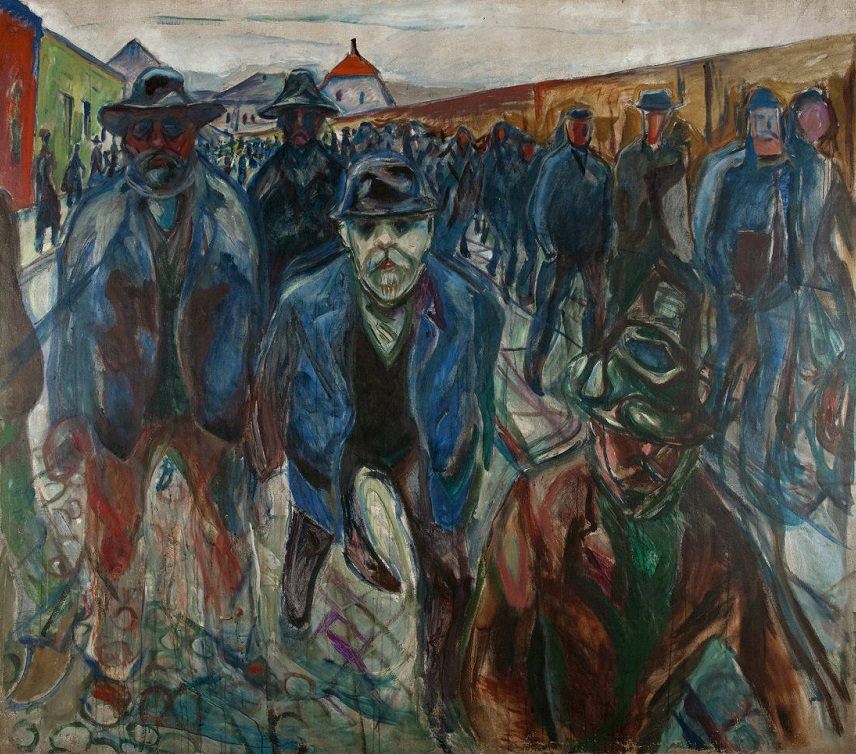 Being an east Syrian laborer in Lebanon

Khalifa al-Khuder reports on the aspirations, sufferings, and occasional joys of the largely voiceless Syrian worker community in Lebanon.

Over the past few decades, plans for temporary travel or permanent emigration have become an essential ‘life project’ for many Syrians. Some, mostly those from affluent families, travel for education, given the deteriorating conditions of higher education in the country, and the high grade requirements for certain specializations. Others travel in search of employment, either in neighboring countries such as Iraq, Jordan, Lebanon, and Turkey, or in the Gulf, or even as far away as Venezuela or elsewhere in South America.

Among those historically migrating for employment were young people from the eastern regions of Syria—Deir al-Zor, Raqqa, Hasakah, and Eastern Aleppo governorates—who often sought work in Lebanon. Despite its relative distance from these areas—compared to Turkey, for example—Lebanon remained a key destination for many of these workers.

“Turkey was a relatively poor country, with no suitable work to be found there,” said Juma Hamidi, a 34-year-old from eastern Aleppo province. “Language was another barrier between us and Turks.”

The ease of entry into Lebanon, requiring only a Syrian identity card, not a visa or passport, encouraged many from these regions to travel there and seek manual labor work across various industries. The choice of Lebanon, as opposed to other Arab countries, was therefore largely due to the complicated visa procedures imposed by the latter on Syrians.

“Lebanon was a country of liberties, the other side that is yet closer to the wider world, so we could discover the world without having to travel far,” said Abu Ali, a 34-year-old native of Jarablus, who worked as a baker in the largely Armenian Burj Hammoud neighborhood, on Beirut’s eastern fringe, for over fifteen years.

Syria’s eastern regions are in fact rich in resources, including livestock, fertile arable lands, and oil wealth. It has long been Assad regime policy, however, to marginalize the region’s population, by measures including inadequate developmental projects in the sectors of education, livestock, and agriculture. There have also been discriminatory practices in public employment, which often favored other regions. Despite the population density and locally-available human resources, many of those hailing from the Syrian coast were disproportionately represented in state institutions in these regions.

Until relatively recently, higher education was considered a luxury in Syria. The cost of a university education was prohibitively high for young people from rural Syria, including those from the eastern regions. While the tuition itself was virtually free, the constant rise in grade requirements for admission, and the remoteness of universities from rural eastern areas, both limited higher education access to an exclusive class in the urban centers. This led to fewer fields of employment, especially in industrial and scientific professions, for Syrians in the eastern regions, who were left with scarce job opportunities barely sufficient to maintain a minimum standard of living.

In consequence, Lebanon constituted an economic haven for people from the Syrian east, despite its precarious security situation and prolonged civil war from 1975 to 1990.

“The monthly income of a construction worker in Lebanon was equivalent to the salary of a prominent government employee in Syria,” said Hamidi, who worked in Lebanon from his earliest youth up till 2012.

Language and dialect were no obstacle for those from eastern Syria residing in Lebanon. Neither were customs or traditions, despite existing disparities. Syrian workers remained patient and resilient, along with the Lebanese, during the deteriorating security conditions of the civil war. Even the bloody battles between the Lebanese factions, and Israel’s invasions and bombardment of Lebanese cities, did not prompt Syrian workers to abandon life in Lebanon and return to Syria, which at that time was far safer.

Perhaps one reason for this persistence of Syrian workers in Lebanon, despite the circumstances, was the presence of the Syrian army in the country from 1976 onward, which had major consequences for Syrian labor at a later juncture.

Under the Khalde bridge, south of Beirut, at a major intersection between different Lebanese regions, the Syrian mukhabarat (intelligence services) erected a checkpoint. Here, a Syrian intelligence officer would sit in his chair and use his left foot as a makeshift traffic light, signaling with his toes for motorists to move, or ordering them to stop. This is only one minor example of how Syrian forces treated Lebanese citizens at the time.

This pattern of security service behavior, throughout nearly thirty years of Syrian military rule, generated long-standing hatred, which only erupted against Syrian workers as the last military convoy of the Syrian army left Lebanon in 2005. Following the assassination of Lebanon’s Prime Minister Rafiq al-Hariri on 14 February of that year, and subsequent mass demonstrations in Beirut that led to the withdrawal of the Syrian army, many Syrian workers fled their workplaces due to attacks and abuses by many Lebanese, particularly supporters of the Free Patriotic Movement and Lebanese Forces parties.

Many returned to Syria in the aftermath of this upheaval, while others went to work in Shi’a-majority areas, protected by Assad’s Lebanese ally Hezbollah. Significantly, one year later, the July 2006 war with Israel resulted in widespread destruction in the predominantly Shi’a Lebanese south, where an estimated 15,000 homes were devastated, including apartments in residential buildings, along with 900 facilities and commercial stores, as well as farms and factories.

The end of that war saw the majority of Syrian migrant laborers working in construction and other relevant professions, given the ease with which they could be taught to young people, their attractive wages compared to other forms of manual labor, and the convenient daily wage system. As such, Syrians contributed a great deal to the reconstruction of the destroyed areas, and their presence in Shi’a areas became significantly higher than in predominantly Christian or Sunni ones.

From protector to persecutor (and vice versa)

After a short period of respite, problems began to resurface again after 2011, due to the sectarian tensions into which the Syrian revolution was quickly descending. At the time, sectarian struggle had not been on the minds of Syrian workers in Lebanon. It hadn’t occurred to them that they would be considered a Sunni center of gravity in Shi’a areas, but it seems Hezbollah dealt with them on exactly this basis.

“I was arrested by Hezbollah operatives more than once, usually due to my name,” said Omar al-Qasim, a 26-year-old from al-Mansoura, a rural town west of Raqqa, who had worked in Lebanon since his youth until sectarian strife escalated in the wake of the Syrian revolution.

As a result, a large proportion of Syrian laborers relocated to work in other Lebanese areas, in order to escape Hezbollah’s abuse. Describing the problems he faced as a Syrian in Lebanon since the Hariri assassination in 2005, between the withdrawal of the Syrian army and 2012, Hamidi said, “The [now-President Michel] Aoun and [Progressive Socialist Party chief Walid] Jumblatt groups chased us out and withheld our wages, claiming we were Syrian and hence sympathetic to the Syrian army. Later, it was the Hezbollah crowd who expelled us from their areas and withheld our wages, claiming we were Sunni and hence sympathetic to the Free Syrian Army (FSA). Hezbollah had protected us from Aoun’s and Jumblatt’s people after Hariri’s killing, and then Aoun’s and Jumblatt’s people protected us from Hezbollah after the Syrian revolution. We have become a punching bag for either this party or that.”

As persecution by Hezbollah mounted, those who could returned to the eastern regions of Syria, and some of them indeed joined the rebel ranks. Others returned to work in their villages, setting up shops with the skills they had learned in Lebanon. Others, however, were stranded in Lebanon and could not return, especially after the Syrian regime issued lists of those wanted for mandatory military service, and Hezbollah’s officially-declared and wide-ranging participation in the Syrian war. This latter development led Hezbollah members at checkpoints to recognize the names of areas linked in their minds to the battles in which the FSA and the Islamist factions had killed large numbers of Hezbollah fighters.

“Let the Northern Storm protect you”

In May 2012, the Northern Storm Brigade, led by Ammar al-Dadikhi, kidnapped a convoy carrying a number of Lebanese Shi’a in the town of Azaz, north of Aleppo, demanding the release of female prisoners in Syrian regime custody. This was the beginning of a dark new chapter in the tragedy of Syrian workers in Lebanon, including those coming from the eastern regions, as it instigated the kidnapping, robbery, and extortion of Syrians.

Ali Khodor, a 28-year-old from the town of Maskanah, east of Aleppo, had worked in Lebanon for five years, but then migrated to Germany for fear of threats and harassment at Hezbollah checkpoints.

“After the kidnapping of Lebanese Shi’a in Azaz and the Northern Storm Brigade’s claim of responsibility, we found ourselves no longer able to leave our homes except in private cars and in groups. We created WhatsApp groups and would leave messages before every journey we took, even if only to the nearest grocery store. We used to transfer our salaries to our families as soon as we received them. With each month, young Shi’a men would wait at checkpoints and roadblocks, stealing the salaries of whoever they could. Once, in front of my eyes, a Lebanese man killed a Syrian man on a Sunday evening as he shopped at a market; he threw vegetable bags on the ground and shouted: ‘Let the Northern Storm come and protect you!’”

Many of the young men who were wanted for mandatory military service, and those from conflict-ridden areas, went underground. Some resorted to hanging pictures of Hezbollah leader Hassan Nasrallah in their homes to avert Hezbollah violence. Others changed their names and replaced their identity documents with counterfeit ones. Many even risked their lives and paid large sums to flee via the port of Tripoli in cargo ships to Mersin, south of Turkey, in fear of Hezbollah operatives.

“I paid $400 to a broker, and sat in the engine room all the way from Tripoli to Mersin,” said Muhammad Khalaf, a 22-year-old from Raqqa who had worked until 2015 in Beirut’s predominantly pro-Hezbollah southern suburb, and is now an FSA fighter in northern Syria. “I couldn’t travel to Istanbul by plane because I don’t have a passport.”

Syrians from the eastern regions have been influenced by Lebanese society, as many of them have adopted Lebanese traits, despite different religious, ethnic, and sectarian affiliations. They were integrated into Lebanese society despite the calamities that occasionally befell them. They also developed careers which they resumed as they returned to their cities and villages, some opening shops with clearly nostalgic names, such as the ‘Beirut Bakery’ in Jarablus. They still retain memories and impressions of that life, ones they would never have known had they not lived and worked in Lebanon.