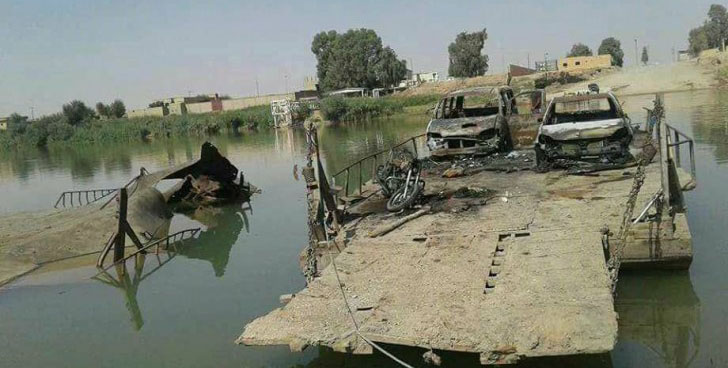 Scores of civilians have been killed by Russian and Syrian regime fighter jets in recent months for merely trying to cross the Euphrates.

[Editor’s note: This article was first published in Arabic on Thursday, 19 October, 2017.]

The southern bank of the Euphrates River in eastern Syria is named “al-Shamiyya” (“The Levantine”), while the northern bank is called “al-Jazira” (literally “The Island,” the historic name in Arabic for Upper Mesopotamia). The cities, towns, and villages of Deir al-Zor governorate are distributed across both banks, which until very recently were linked by numerous bridges bringing those populations together, and connecting the Syrian desert to the fertile lands of the Jazira.

From the northwest, the first of Deir al-Zor governorate’s bridges was al-Mughalla bridge, on the administrative borders with Raqqa governorate. This was followed by the bridge of Halabiyya and Zalabiyya; a historic site around forty kilometers from Deir al-Zor city. After that came the bridge of al-Jura, which connected the al-Jura neighborhood with western al-Hawiqa in the city of Deir al-Zor, and then the famous suspension bridge, considered the city’s most prominent landmark, the building of which began in the days of the French occupation in 1925, and was completed in 1931. So thoroughly tied was Deir al-Zor, historically, with the image of this bridge that it became a symbol of it. The city was also home to al-Siyasiyya (“The Political”) bridge—which got its name from the presence of a Political Security branch at its northern entrance—and al-Kanamat bridge, related to the Kanama family, and other small bridges linking the two banks of the river that splits, inside the city, into two branches.

As for Deir al-Zor’s eastern province, there was the bridge that linked al-Mayadeen with al-Shuhayl and Dhiban on the other side, and then the bridge of al-Ashara that was erected in the war bridge style; cords and planks of wood; for the crossing of soldiers and light vehicles. After that came al-Ramadi bridge, fifteen kilometers west of Albukamal, which was actually a train track built recently, before the revolution, and never completely finished, linking the village of al-Ramadi with the city of Hajin. And, finally, there were al-Susa and al-Baghuz bridges in Albukamal, at the eastern edge of the governorate, by the Iraqi border.

All of these bridges are now destroyed and unusable. The very first one of them to be destroyed was Deir al-Zor’s suspension bridge, at the hands of the artillery and fighter jets of the Assad regime in 2014. Likewise, the regime destroyed al-Kanamat bridge after targeting it numerous times throughout 2014. As for al-Siyasiyya bridge, which for years remained the lung of Deir al-Zor city’s liberated areas after the expulsion of the regime in 2013, the latter’s aircraft, and then the aircraft of the US-led Coalition, bombed it several times. And each time, there was an attempt to restore it temporarily, given that it was the sole passageway for the parts of Deir al-Zor that Daesh (ISIS) had taken over.

The rest of Deir al-Zor governorate’s bridges were destroyed in 2017, by the jets of the Coalition, which waged a comprehensive air bombardment campaign aimed at cutting all the governorate’s points of contact, separating al-Shamiyya bank from its al-Jazira counterpart, and preventing Daesh from moving its forces and heavy vehicles between the two banks.

This destruction of the bridges caused an asphyxiating economic crisis in the governorate that was already besieged, and it became impossible to move goods, livestock, or people between the two sides of the river, meaning commercial traffic came more or less to a standstill. This in turn caused a humanitarian and health crisis, due to the concentration of health facilities and centers south of the Euphrates, such that transporting the ill and wounded became extremely difficult, especially to al-Mayadeen hospital, which became the central hospital in the governorate, with many medical specializations found nowhere else.

Equally, travelers faced difficulty moving from al-Shamiyya bank to al-Raqqa and al-Bab and rural Aleppo, and it became challenging to secure many of the necessities unavailable in the governorate, such as spare parts for cars, and electrical materials, which were concentrated in al-Raqqa governorate and rural Aleppo, after the movement of the industrial cities and the owners of shops to them from other areas.

In addition to bridges, there were originally some river “crossings” linking the banks of the Euphrates, to which the people would resort due to the large distances separating the bridges from one another. After 2014, the use of these crossings increased, due to the danger of movement on the long roads between the bridges given the conditions of war and continuous bombardment. But after all the bridges were destroyed at the start of 2017, the river crossings proliferated greatly along the length of the Euphrates in Deir al-Zor governorate, and became the sole, vital alternative available for movement between the two banks.

These river crossings are areas carefully selected on the two sides of the river, where it’s possible for special rudimentary “ferries” produced locally to anchor on both sides. This requires that the depth be appropriate at the shore, such that it’s possible for the ferry to stop without getting stuck, and that the water be relatively still. The river banks are flattened at the points of crossing to enable cars to enter and exit the ferries safely.

The ferries themselves are of basic manufacture, made of emptied barrels lined up next to one another according to the desired length of the ferry, then soldered together, with a large sheet of tin fixed on top, and a frame to protect riders. Ramps would be placed to facilitate the entrance and exit of cars, and agricultural tractors, and livestock. A diesel-powered engine drove the ferry, steered by someone operating a rudder. The journey time would usually take five to ten minutes, depending on the width of the river.

Thus was the problem of movement resolved, with the crossings becoming a viable alternative to the bridges, and extending along the length of the Euphrates until every area had its own dedicated crossing, which revived economic life and became a new gateway for work and earning a living. Each crossing was the private property of an individual or a group of people, based on several factors, most importantly the ownership of the land adjacent to the riverbed at the crossing, and the source of the capital spent on setting it up.

Fares for crossing were around one dollar per person, and five dollars for a car, and the ferries could take more than one car, and dozens of people, depending on their size. Accordingly, movement across the crossings became a profitable trade, and various ISIS members gradually began taking them over, until the organization took possession of the largest crossings, imposing fees on the others per decisions issued by its bureaucracy.

Crossings in the crosshairs

Work continued on these crossings until last September, when the Assad regime began targeting them with support from Russian fighter jets one month after the military campaign launched by Moscow and the regime on the governorate. These planes committed great massacres against civilians across numerous cities, towns, and villages, forcing many people to flee to the safest available areas.

The attacks of the Russian jets concentrated on the northern side of the river, which made people flee via the crossings to the other side, where they built temporary quasi-camps on the banks of the Euphrates, after hundreds of them had their houses destroyed. But the Russian jets, as well as those of the regime, pursued a new strategy of targeting civilians on these crossings, resulting in further massacres, not all of which were documented due to the absence of communications, and the restrictions imposed by Daesh on media documentation work in their areas.

It was at the start of last September that the fighter jets began committing massacres at the crossings, and they are still ongoing to this day. In the western countryside, they include the slaughter at al-Hawayij crossing, which claimed 40 civilian victims; and that at al-Shmaytiyya crossing, which claimed 3. As for the east, dozens of massacres have been committed: 54 were killed at Darnaj crossing; 36 at al-Buleel crossing; and dozens more at al-Mayadeen and al-Ashara crossings. There have been further raids and atrocities at the Subaykhan, al-Toob, Muhasan, Tabia Shamiyya, Hajin, and al-Baghuz crossings.

It appears the Russian fighter jets want to stop the use of the river crossings altogether, and they persist in targeting them repeatedly to the present moment, leaving hundreds killed or wounded, the overwhelming majority of them civilians fleeing the hell of war, to whose fate neither the feuding forces nor the international community pays the slightest attention. Perhaps one of the most conspicuous elements of this crime, which has been committed with international participation, is the absence of any effort to secure safe passages for these civilians, or to prepare livable camps in which to receive them.

No doubt Russia and the Syrian regime would justify these massacres, if asked to, by saying that the crossings are used to move Daesh members. But the targeting of civilians on the pretext of the presence of fighters or wanted persons among them is a war crime, even if those fighters or wanted persons are indeed among them. And it is a war crime committed without any words spoken internationally about holding its perpetrators to account, or stopping them, or even condemning them.

Firas Allawy
Alex Rowell Alex is a Beirut-based writer, translator, and managing editor of Al-Jumhuriya English. His first book, 'Vintage Humour: The Islamic Wine Poetry of Abu Nuwas', is due to be published by C. Hurst & Co. in November 2017. He tweets @alexjrowell.