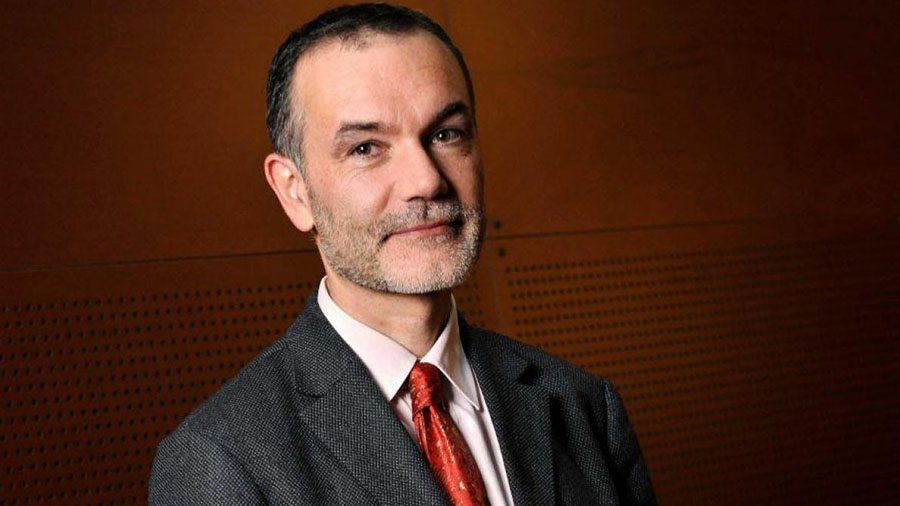 Jean-Pierre Filiu to Al-Jumhuriya: No stability without liberty

A leading French Arabist and author talks Syria’s revolution(s), reconstruction, and the illusion of “stability” under dictatorships.

In the latest installment of our interview series, Al-Jumhuriya speaks to Jean-Pierre Filiu, a French historian, Arabist, and professor of Middle East studies at Sciences Po’s Paris School of International Affairs.

A fluent Arabic speaker and veteran observer of the region, Filiu served as a diplomat in countries including Syria, Jordan, and Tunisia before taking up the academic profession full-time in 2006. His numerous books include the French History Convention-prize-winning Apocalypse in Islam (University of California Press, 2011); The Arab Revolution: Ten Lessons From the Democratic Uprising (2011); Gaza: A History (2014); and From Deep State to Islamic State: The Arab Counter-Revolution and its Jihadi Legacy (2015)—all three published by Hurst (UK) and Oxford University Press (US). With works about Islam and the Arab world published in fifteen languages, he is among the most prolific and distinguished writers on the Middle East today.

Al-Jumhuriya corresponded with Filiu earlier this month by email.

Al-Jumhuriya: Ever since the fall of Aleppo last year, various diplomats, writers, and other observers—including many supportive of the Syrian opposition—have declared the “death” of the Syrian revolution, or some equivalent formulation. Do you agree the revolution is finished, and Assad has “won,” and, if so, what should (or can) Syrian democrats, whether inside or outside the country, practically do at this stage to sustain their struggle?

Jean-Pierre Filiu: Syria has been undergoing a revolutionary process since 2011, while the Assad regime unleashed a ruthless counter-revolution under the pretence of a “civil war.” I never thought such “war” could be won or lost by any party, but I do believe that introducing war dynamics was a deadly trap laid by the Assad regime to divert most of the revolutionary energies into a desperate fight for survival. I spent part of the summer of 2013 in the “liberated” part of Aleppo, which had been under the control, for a year at the time, of the revolutionary forces. The military dimension of the confrontation between “liberated” East Aleppo and “loyalist” West already appeared to me as being secondary when compared with the crucial development of an alternative self-government in the “liberated” areas. This is what the Assad dictatorship and its unconditional backers in Russia and Iran wanted to suppress at any cost: the very possibility of an alternative. I was appalled when the “liberated” East thought it could “conquer” West Aleppo during the summer of 2016. This military delusion led to the collapse of the following autumn. So it is now obvious that the Assad regime cannot be defeated militarily. But I never thought it could be. Likewise, I never thought the dictatorship could “win” since it can only conquer ruins rather than cities.

Al-Jumhuriya: Similarly, as the Syrian war is ostensibly—according to the same people—approaching its final chapter, there has been an increasingly fashionable idea in Western policymaking circles that funding for the country’s reconstruction can be used as leverage in order to force a democratic transition in Damascus. Do you find this notion realistic? If not, what could be a more effective means at this stage of achieving a democratic transition?

Filiu: It has to be crystal-clear that, for the Assad regime, the so-called “reconstruction” is the continuation of its merciless war against its own people, now using other means. There is absolutely no possibility for a credible, sustainable, and inclusive reconstruction if operated under the sponsorship of such a dictatorship. First, because this regime will treat as hostile the populations in the areas formerly held by the opposition, prevent their return home, and coerce the remaining inhabitants. Second, because the so-called “reconstruction” is the only way for the Assad regime to pay part of the colossal debt it has accumulated towards its Russian and Iranian patrons. Criminal networks connected with the centers of power in Moscow (or Grozny, for the Chechens) and Tehran (or Beirut, for Hezbollah) are already active in this very profitable business. Donors have to understand once and for all that the Assad regime is not a state interested in the welfare of its citizens but a regime obsessed by its own logic of predation and suppression. Such a regime would never hesitate to refuse any international aid that would come with even a minimal string attached. There should be no hope of using the “carrot” of reconstruction money to extract any concession from the Assad regime. Contributing to the so-called “reconstruction” of Syria in those circumstances means collaborating with a dictatorship accused of the worst crimes against its own people.

Al-Jumhuriya: The premise of your recent book, From Deep State to Islamic State, is that the principal cause of the contemporary proliferation of jihadist groups such as ISIS lies in the tyranny and double-dealing of Arab regimes themselves, particularly Bashar al-Assad’s. Yet the popular perception in much of the West today, after the fall of Mosul, and now of Raqqa, is that ISIS is on the verge of total defeat, while Assad’s regime still stands, and elsewhere in the region, such as in Egypt, many of the traditional military dictatorships are more repressive than ever. Was your premise mistaken, then, or do you believe, rather, that the apparent decline of ISIS today is only illusory, or temporary?

Filiu: My main thesis in this book is that dictatorships unleashed—voluntarily in Syria, involuntarily in Egypt—unbridled jihadi violence in order to catch the revolutionary forces in a crossfire, forcing them to fight on both sides. Obviously, [Abd al-Fattah] Sisi’s coup in Egypt, in July 2013, despite the unprecedented repression that has followed ever since, has not managed to counter the steady escalation of jihadi violence, first in the Sinai peninsula, now on the Egyptian mainland. As such, pure military repression cannot defeat the jihadi threat it contributes to nurture, even when the balance of power between the Egyptian army and the jihadi insurgency is at least one hundred to one in favor of the security forces.

The situation was very different in Syria, when the first major defeat of ISIS unfolded through the “second revolution” launched by anti-Assad forces in January 2014 in the northern and eastern parts of the country. But the Assad regime, and of course Russia and Iran, were more interested in crushing those very forces that had defeated ISIS than in fighting jihadists. Remember that ISIS could regain control over Palmyra, already under its domination from May 2015 to March 2016, while the pro-Assad forces were too busy fighting the opposition in Aleppo in December 2016. It is only last March that ISIS was finally ousted from Palmyra. If you compare ISIS today with the first “Islamic State in Iraq,” proclaimed in 2006 and largely defeated in 2007, ISIS is now much stronger, with a vast range of branches over the Middle East and beyond. And the same factors that allowed ISIS to strike back after 2007 are still there, just much worse, with at their forefront the exclusion of the local populations from decision making processes.

Al-Jumhuriya: Europe has witnessed a marked shift in recent years, away from attitudes that might be described as globalist, internationalist, and multiculturalist, toward more traditional—some would say antiquated—notions of nationalism and isolationism, with an accompanying hostility to outsiders and immigrants. Do you think this new zeitgeist will come to be reflected (if it isn’t already) in future European policy toward Syria, and the Middle East more broadly?

Filiu: I will answer you with an historical comparison. The fall of the “wall of fear” in the Arab world in 2011 was as important for the fate of Europe as the fall of the Berlin wall in 1989. But only a minority of Europeans felt their collective future was bound to what was happening on the southern shore of the Mediterranean. Instead of organizing an effective solidarity movement with the progressive forces of the democratic uprisings, most European decision-makers remained aloof. Their tacit choice for “stability” versus “liberty” facilitated the disastrous outcome of the refugees’ waves and terror attacks.

Al-Jumhuriya: Finally, you spoke in a recent talk about the urgent need for an ethical, rules-based international order, pointing to the ways in which the breakdown of this has been the cause of so much misery in Syria. How can this goal be achieved, practically speaking? What can ordinary citizens, Syrian or otherwise, do to help bring it about?

Filiu: In line with my previous answer, I will repeat there is no authentic “stability” without the guarantee of the basic collective and individual freedoms. Contrary to the usual clichés, dictatorships are basically unstable; first because they function on a “civil war” logic internally; second because those nefarious dynamics nurture the “exportation” of terrorism outside of their borders. I was a diplomat for nearly two decades before joining academia in 2006, so I know from experience that morally-flawed options can lead only to more crises and troubles. Look at the result of nearly seven years of supposedly “realist” policies in the Middle East: millions of refugees, historical cities turned to ruins, entire communities displaced and exiled, unprecedented levels of sectarian hatred, economies in shambles, education and health systems devastated, and all this at the cost of hundreds of billions of dollars that could have been better spent on development projects and institution building. Such blind and heartless “realism” has completely lost touch with the reality of the lives and aspirations of the women and men living in the region. An ethical approach is the only way to reconnect with this human reality that will shape, for better or for worse, the future of the Middle East, which matters so much for the rest of the world.