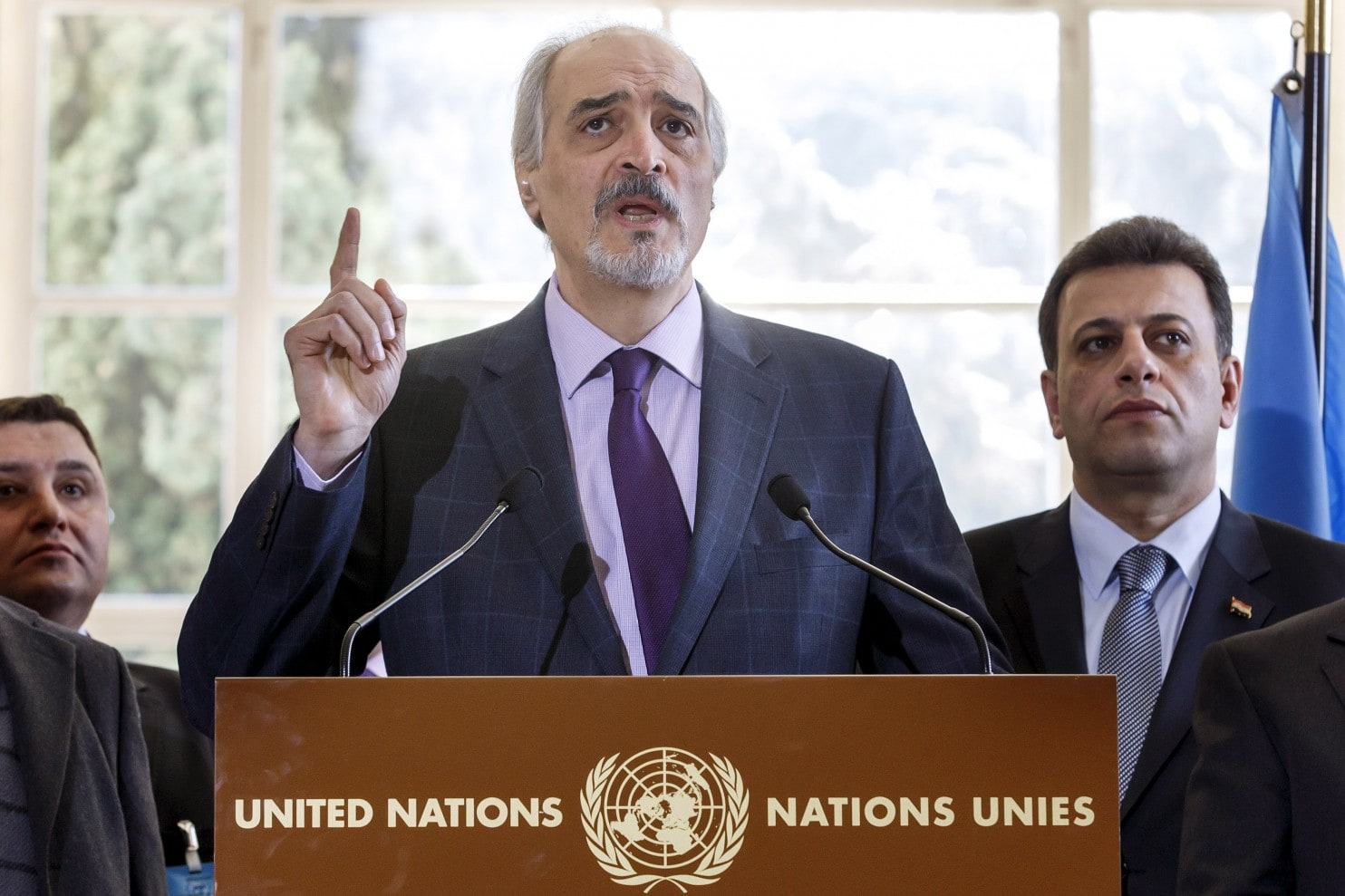 A climate change for Assad

That the Syrian regime has killed hundreds of thousands is merely a footnote for some now it’s joined the Paris Agreement.

[Editor’s note: This article was originally published in Arabic on 20 November, 2017]

Earlier this month, on the sidelines of the UN Climate Change Conference held in Bonn, Germany, it was announced that the Syrian Arab Republic had agreed to join the UN Framework Convention on Climate Change, otherwise known as the Paris Agreement. This accord was first adopted at the end of 2015 in the French capital, and was considered a starting point for the replacement of the Kyoto Protocol beginning 2020. It was presented as a major step forward after years of failure to find consensus, chiefly because, as well as incorporating the vast majority of world nations, it was able to get the most important industrial powers (the United States, China, and the EU); and thus the greatest sources of greenhouse gases; on board.

At the time, Nicaragua remained outside the agreement, in protest against its being “non-binding” and not backed by punitive measures for those failing to implement its provisions. Also outside the accord was the Syrian Arab Republic, which was not then concerned about a debate on global warming. Then, on 1 June, 2017, Donald Trump decided to withdraw the United States’ signature from the agreement, on the grounds that its clauses were not in line with what he considered America’s economic interests. The US’ withdrawal didn’t terminate the Paris Agreement, but was a painful blow to its symbolism as a universal agreement given Washington’s economic and industrial superpower status, leading to doubts and concerns about the possibility of its entering into force without the US funding and technology needed to develop less environmentally damaging industries and means of transport, which the US had committed to provide under Barack Obama.

On 20 October, the Nicaraguan President Daniel Ortega signed a document declaring Nicaragua’s accession to the Paris Agreement. Two days later came the Syrian People’s Council’s passing of a draft law approving the accession of the Syrian Arab Republic to the same. The rituals, customs, and mechanisms of Syrian state institutions, however, delayed the official announcement of Damascus’ joining the other 196 signatory nations until the 18th of this month; that is, until Bashar al-Assad signed the decree to adopt the law as required by the Syrian constitution, according to Russia’s RT website.

In its festive coverage of the news, al-Baath newspaper reported that “some” considered Syria’s accession to the agreement “wonderful,” while “others” were content to say only that they “want the accession of everyone.” For its part, the Lebanese environmentalist website Green Area published an editorial by Maya Nader that began with the words, “It seems the global war launched with US-Israeli support against Syria will backfire in a battle of another kind,” concluding that, “The man of the White House is now all alone. Will Syria’s accession form an additional stimulus for him to reverse his decision?”

This may all seem like standard self-congratulation by the regime’s media and the usual “anti-imperialist” Lebanese propagandists. But a glance at the wider media realm leads one to comparable headlines and turns of phrase. A title in the Guardian, for instance, reads, “Syria signs Paris climate agreement and leaves US isolated.” Similar titles could be found in the New York Times, Politico and a great number of international media outlets, some of which didn’t stop there, but added with a hint of praise that Syria signed the agreement “in the midst of a brutal civil war” and is “doing better on climate change than the United States.”

The nature of the regime that is signing international agreements in the name of Syria, and its practices towards its people throughout its heinous history, particularly during the last six years in which it has waged all-out war against against the broad sectors of the population opposed to it, appear to be details of no importance.

The environmental issue is not new in the propaganda of the Syrian regime and its allies, especially that directed at Latin America, Africa and the European environmental left. From the first moments of the Syrian revolution, a theory emerged that one of the reasons for “the war against Syria” was the refusal of “the Syrian government” to allow the cultivation and trade of genetically modified food, which represented a threat to the economic interests of large US corporations. In the case of Latin America, and given the long and horrendous history of American agribusiness companies in the region, the behavior of which was often little different from that of organized crime cartels, that propaganda was successful. References to it are frequently employed by leftist and environmentalist apologists for the regime in the face of any criticism of its brutality. Evidently genetically-natural crimes, without the use of genetic modification technologies, do not warrant “green” condemnation.

But the situation here is not about the possible role of Bashar Assad, through “embarrassing” and isolating the United States, in saving the world from destructive climate change, but is about the status and nature of the major international bodies, these mercurial structures that flow with the balances of power and the resulting status quos through highly bureaucratic mechanisms that are on the one hand extremely elitist, and on the other hand utterly insensitive to values ​​and morals—including those bodies that exist, in theory, to defend those same values—all in the name of “political neutrality” toward issues; such as human lives, rights and freedoms; that are political par excellence. Of course, the thuggish behavior of the two superpowers, the United States and Russia, sits atop the pyramid of diplomatic hypocrisy; whether through their use of veto power at the Security Council for the interests of themselves or the lesser thugs in their orbit, such as Israel and the Syrian regime; or through extortion by the means of funding and political support, such as the US’ bullying of UNESCO to Israel’s advantage. Beneath them in the pyramid sit innumerable farces, such as Saudi Arabia’s election to the UN women’s rights commission; and the appointment of Robert Mugabe as the World Health Organization’s goodwill ambassador (that this was later withdrawn after the inevitable backlash doesn’t negate the fact that top-ranking employees deemed it right to consider such a position for Zimbabwe’s tyrant and pillager in the first place); and the awarding last year of an honorific medal to Bashar al-Jaafari, the Assad regime’s ambassador to the UN, by then-Secretary General Ban Ki-moon for the former’s having served a decade at the UN. That the man represents a criminal regime whose record overflows with crimes against humanity is merely a fleeting detail next to the importance of the “rites” and “traditions” of diplomacy, which transcend logic and are exempt from morality.

The depravity of this reality is not only symbolic, since these giant administrative and financial structures are responsible for extremely important matters, such as humanitarian aid and refugees. In the name of “ritualistic neutrality,” these entities function as mechanisms to sanctify all the enormities of the fait accompli imposed by the balance of power, either through their direct action and rhetoric, or through the structural violence they inflict against local actors to impose “positive neutrality toward the more powerful.” Thus, reports such as those last year by The Syria Campaign and The Guardian (the same paper that told us Assad’s Paris Agreement decision “isolated” the United States) show how UN funding for humanitarian and relief projects has brazenly shifted to favor the cronies of the Syrian regime’s inner circle. Later, we saw UNHCR issue its vision for what we are supposed to find when we “Search for Syria,” in a website that, with its language claiming “non-alignment to the parties to the conflict,” looked more like a public relations campaign for Asma al-Assad’s Syria Trust for Development.

Climate change is too important to rely on Bashar Assad’s ability to “embarrass” other nations; human rights are too sacred to be left to the cocktail of states with bloody records of violations which we presently find on the Human Rights Council. Genuine “peace-building” cannot be achieved by Staffan de Mistura and his ilk, and “reconstruction” compatible with respect for the rights and dignity of people will not be realized by the “expertise” of Abdullah Dardari. These values ​​need to be rescued from this vast international network of clientelism, and from its general secretaries and executives and staff who are all so well-accustomed to living the high life, and to dealing with the world’s powerful and despotic as their colleagues in loftiness, with their relationship governed by diplomatic rituals. I refer to the necessity of battling this without knowing the means available to do so, and without confidence that there is sufficient willingness to confront it in the world of Trump-Putin we live in today; this world that certainly did not invent depravity, but renewed it and helped strengthen and reveal its effrontery.

At the beginning of the revolution, we produced optimistic and perhaps somewhat wishful analyses that the Assad regime had “fallen morally at the first bullet fired at demonstrators,” and that it and its allies were “embarrassed in front of the world and in international forums” as a result of their crimes against the Syrian people being exposed. The passage of time turned these phrases into a source of ironic mockery and ridicule due to the world’s utter failure to make one positive contribution to save Syrians from the regime’s war against them. Today, it is Bashar al-Assad who has become capable of embarrassing others in international forums. This, too, is a form of deadly climate change.