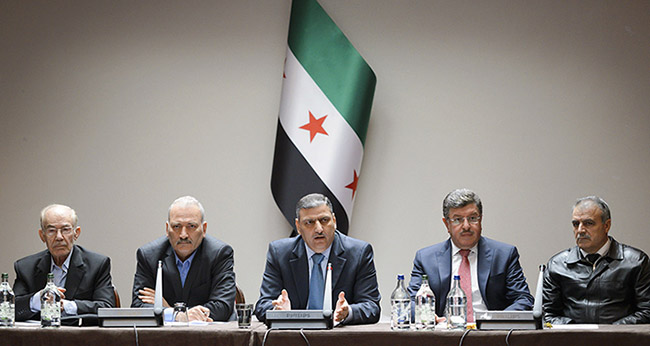 [Editor’s note: This article was originally published in Arabic on 22 November, 2017]

With just two days to go before the launch of the latest Syrian opposition conference in the Saudi capital, known as Riyadh II, the head of the opposition’s High Negotiations Committee (HNC), Riad Hijab, announced his resignation Monday.

Hijab’s resignation, which had been expected from him and a number of the HNC’s members, was the clearest declaration yet of the end of a diplomatic phase that began in December 2015, with the issuing of the Syrian opposition’s so-called Riyadh statement. That phase witnessed widespread changes in the Syrian and regional conflict arena, with the Bashar al-Assad regime trying to regain military primacy in a large number of regions, as a result of the extensive support from its allies in Moscow and Tehran. To Moscow’s mind, these changes demanded a corresponding change in the form and make-up of the Syrian opposition, in order for those military victories to begin being translated into a new political reality laying the groundwork for the Syrian regime’s endurance, with Russian and Iranian control over the particulars of military and political decision-making in Syria, through the creation of new benchmarks to that end.

New dynamics inside the Syrian opposition

The concluding statement of the first Riyadh conference, which announced the HNC’s creation, was a fundamental point of transformation in the dynamics prevailing over the Syrian opposition, for numerous reasons pertaining to the composition of the Syrian opposition’s internal currents, and the prevailing balances of power; international, regional, and especially Gulf Arab.

For one thing, the HNC was the first entity in which the Muslim Brotherhood did not hold the casting vote, as a result of the regional and international power balances that governed the emergence of the Council and the Riyadh conference, as well as the shift of Gulf decision-making on Syria from Doha to Riyadh, which triggered new conflicts inside the opposition embodied in the behind-the-scenes disputes between the HNC and the National Coalition for Syrian Revolutionary and Opposition Forces, especially during Anas al-Abda’s leadership of the latter, which were an expression of the Muslim Brotherhood’s anger at their removal from the political decision-making circle for the first time since the creation in 2011 of the Syrian National Council, and then the Coalition.

Despite this unspoken conflict, the HNC was a new point of equilibrium between the Syrian opposition’s component movements, a broad spectrum of which came from parties that historically stood against the Assad regime, even if they brought with them, as a result of the long stagnation of political life, old conflicts from the ‘60s, ‘70s, and ‘80s to the institutions and organizations of the post-revolution opposition.

Those new dynamics offered an opportunity to create Syrian institutions capable of movement within a wider margin, and the shuttling of the HNC’s Hijab between the Saudi and Qatari capitals throughout the previous period was an indication of a desire for greater independence from regional decision-making.

Relations with the armed factions

Although the Coalition included seats reserved for the military factions, the change in the power balances among these factions, and the decline of the role of the official Free Syrian Army (FSA) and the military operations command centers in Turkey and Jordan—which drove a number of FSA factions to disbandment and dissolution—with the accompanying domination of the Islamist factions, which also contributed to the elimination of many FSA factions, made the relationship between the Coalition and the military factions occasionally reach the point of rupture.

At this point, the first Riyadh conference was a re-formation of relations within the opposition’s ranks, giving greater political weight to the armed factions; particularly those that enjoyed positive relations with Riyadh, such as Jaysh al-Islam and the Southern Front factions. Yet despite that, relations were not always friendly between the HNC and the armed factions. The Islamist Ahrar al-Sham movement, which went to participate in the Riyadh conference as a result of the arrival of several new figures to the decision-making centers within it, such as Labib Nahhas and the group linked to him, later clashed with the HNC for reasons internal to the movement. These included the inability of the new leadership to form a solid core to drive the movement to confront its extremist wing, which preferred to draw closer to Jabhat al-Nusra at the time, and other reasons relating to the nature of Ahrar al-Sham’s relationship with the HNC’s military components, and its divergence from the midway stance it had previously adopted in its relations with Doha and Riyadh in favor of closer ties with Qatar. Despite such tensions as these, however, the conflict between the armed factions and the opposition’s political bodies reached a relative low point at this time.

Thus did the trend in the relationship between the HNC and the armed factions lean toward the latter handing the HNC control over negotiations about the political solution in Syria; a trend accompanied by the retreat of the role and capabilities of several of those factions, such as Jaysh al-Islam, which withdrew to its solid core (governed by familial, religious, and interest-based ties in Douma), and Ahrar al-Sham, the military capabilities of which were broken up by numerous defections by the conservative current, and whose strategy became one of self-transformation into a new Islamist political movement in Syria, which so far has not been radically changed under the new leadership of Hassan Soufan.

The most important transformation, however, in relations between the armed factions and the HNC began with Turkey compelling the latter to enter into the Astana diplomatic process sponsored by Russia, as a track parallel to that in Geneva. The formation of a dedicated delegation for the armed factions was the point of radical transformation in the relationship that was originally based on the Syrian opposition’s political and military organizations entrusting the HNC with handling the political solution, which then put ties between the factions and the HNC in a critical position from which it didn’t exit until the announcement of invitations to the Riyadh II conference.

Riyadh II and preparations for Sotchi

The invitations sent out by the Saudi foreign ministry for the Riyadh II conference amounted to a declaration of a new Saudi orientation, resembling in its effect the transformation that happened with the Turkish policy, and led as a result to the launch of the Astana process. The invitations, which disregarded leading personalities in the HNC, such as Riad Hijab, were deemed by numerous entities within the Syrian opposition to indicate a new direction toward acceptance of the margin set out by Moscow for political transition in Syria. This in turn could be considered a preparation for a political process to be launched by Russia in Sotchi to create the appropriate benchmark for the form of political transition that it supports in Syria.

Numerous figures and entities to whom invites were sent refused to attend the conference, and hundreds of Syrian politicians and activists put out a statement in which they affirmed that ceding any of the fundamental principles or political benchmarks of the negotiation process would be unacceptable to the Syrian public, and that a transition of unclear characteristics would have the effect of granting the Assad regime the opportunity to continue, whether at the head of power or as a fundamental component thereof.

The stance taken regarding this transformation, the acceptance of which was implicitly stated by the Saudis’ invitations, will be the main determiner of the political conflict around Syria in the coming period, and one didn’t need to wait for the concluding statement of the Riyadh II conference to know the main lines of the new entity anticipated as an alternative to the HNC. The desire and ability of a broad spectrum of the Syrian opposition—political and military—to resist what regional and international forces attempt to impose on them will be a factor of profound importance in deciding the future of this direction.