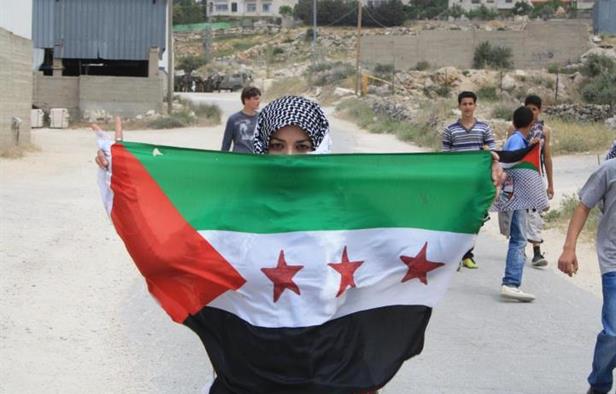 [Editor’s note: This editorial was originally published in Arabic on 11 December, 2017]

The story is not the Donald Trump administration’s recognition of Jerusalem as Israel’s capital, and the accompanying disdain for the Palestinian people, and their connection to the city that takes center stage in contemporary Palestinian nationalism, and in Islamic and Christian sentiment. This is not the story, for a predisposition toward this has long been harbored by American administrations and the international system that recognized, after the Second World War, a state founded in essence on ethnic cleansing, and based today on racial discrimination. The story, rather, is the shedding by the powers leading the international system of any pretences to justice or peace-making, even if only pro forma, in a manner that buries once and for all the pitiable Israel-Palestinian peace process, and makes of the present scattering of the Palestinians in disconnected enclaves the end of their struggle.

In neighboring Syria, where the presence of the international system is more direct today, the Palestinian fate appears in its true form. It appears in the image of international protection for Assadist rule at the Security Council in a manner that recalls the protection of Israel; in the image of a physical extirpation of the Syrian revolutionaries that continues the political extirpation of the general public in a manner recalling the political extirpation of the Palestinians on their land; in the image of monopolization by Assad and Israel alike of weapons of mass destruction and air power; in the image of the ranking of human beings such that some of them deserve sovereignty and recognition from the international system, and obtain the ability to kill at will with exemption from any law, while others wander about aimlessly, their suffering unacknowledged, stripped of all rights, their very humanity and right to life held in suspicion.

The Assadist state has engineered the Palestinianization of Syrians in this manner throughout the years of the revolution, to Israeli and regional satisfaction, and with complete impunity and internationally-guaranteed immunity from prosecution, at least since the chemical deal of September 2013. And it seems this terrific success today is tempting the crossing of the road in the opposite direction, and the dishing out of Syrian treatment to Palestinians; denying them meaning as well as a homeland; in the manner embodied in Trump’s decision. This decision is no random presidential act, as some may prefer to tell themselves—perhaps hoping for the advent of a “rational” American president after Trump to keep up appearances better than the impudent billionaire—but is tied rather to structural transformations in the international system, which is moving everywhere in anti-democratic directions, with rapidly diminishing sensitivities about racism, to the extent that calls for an “Islamic Holocaust” have been issued from the very territory that once housed Auschwitz.

For almost seven years now, Syria has been a field experiment for some of these counter-revolutionary and anti-democratic transformations. Throughout these long years, the committing of massacres—including by means of weapons of mass destruction—has become an acceptable tool of policy, as has the industry of torture and murder in prisons and security facilities. Henceforth, the Syrian field experiment will provide precedents upon which international powers can depend to kill yet more people, and test yet newer weapons, as Russian officials boast of doing in Syria. If the Palestinians today were to embark on a new intifada, the prospect would be greater than at any time before that they would meet a Syrian fate, bolstered by the Assadist precedent and the reactionary changes in the international system.

It is these structural changes that merit looking at and thinking about, and working toward building politics of liberation to confront, and not the specious, pseudo-anti-imperialist one-upmanship that arises from considering the general populations of our countries inattentive and ignorant; easily deceived by the speeches of demagogues like Hezbollah’s Hassan Nasrallah, who tell them their pains and dignity are of no significance, and that all that matters is what fanatics such as themselves decide. And the worst response to these lies is their mirror image, which responds to their one-upmanship with yet more of the same in reverse, and is skeptical of the value of any struggle or meaning; constantly blaming the victims for their ‘irrationality’ or indeed their stupidity. Neither of these courses can be the way forward. The truth lies elsewhere: in the facts of the ongoing political and physical extirpation in Syria; in the stripping of moral and symbolic dimensions of the utmost importance for Palestinian nationalism, after the expulsion of most of their people from their homeland and the practice of racial discrimination against those remaining; and in the collusion of local factions from our countries with occupations and international powers of escalating racism.

And if there’s an additional fact pointing to the Palestinianization of Syrians today, it is the Syrian “peace process” that emulates its miserable Palestinian forebear, and exceeds it in lowness and insolence and deception. It’s not even known if this “process” takes place in Geneva, or in Astana, or in Sotchi, for a start. A domesticated ‘opposition’ is openly manufactured and engineered so as not in fact to oppose the occupiers and the local murderer working to serve them; and whoever still defends the values of the revolution, and a say for the poor and deprived in the future of their country, is accused of extremism. This “process” doesn’t promise the general Syrian public anything more than second-class citizenship in their own country—indeed, it establishes an Israel-like regime in the country, only this time with multiple occupations, and on its face a hereditary and dynastic rule, the history of which was founded on massacres. What awaits Syrians after their alleged “peace” is not a new situation of stability, nor even the old, Assadist Syria, but a regime of ghettoes and racial discrimination.

What can be concluded from the state of the Palestinian cause today, and the fate of the Arab revolutions, is the need for a new revolutionary generation, and new, liberation-oriented thought and practice, to turn the page on pseudo-anti-imperialism and its inverse, and to base politics on general publics taking ownership of their countries, and deciding their fates. It is this that could become the counter-story; the one of emancipation.