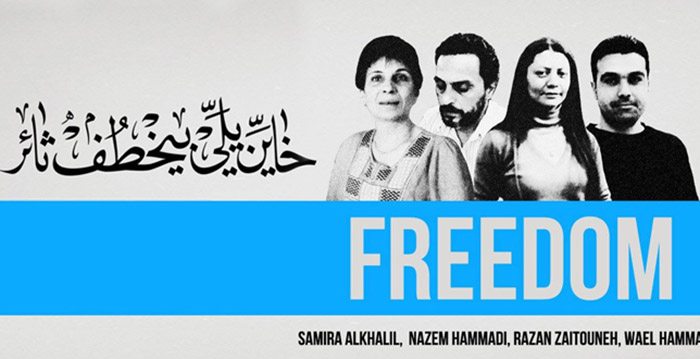 Islamists and the Douma Four

On the 18th and 19th of July this year, I attended a workshop in Istanbul on dialogue between Islamists and secularists, organized by the Islamist-leaning Jusoor (“Bridges”) center, along with more than twenty other mostly male participants. This was the second of three workshops organized by the center; I had also attended the first, in May, but was unable to attend the third, in September, for travel reasons.

The topic here is not what went on in the workshops, about which I’ll say only that they were the first time I had ever sat down with Syrian Islamists and exchanged views on some subjects, and that I found them useful, intellectually. I wrote about them in Al-Hayat and Al-Quds al-Arabi, respectively, highlighting in the latter article some of the ideas I’d developed during the second workshop.

In the booklet introducing the workshops’ content and participants, there appeared—at my request—the following about me: “[…] and he is the husband of Samira al-Khalil, kidnapped in Douma with Razan Zaitouneh, Wael Hamade, and Nazem Hamadi since December 2013, and the available indications suggest that ‘Jaysh al-Islam’ is responsible [for the crime]. And he is also the brother of Firas al-Haj Saleh, kidnapped since July 2013 at the hands of ‘the Islamic State,’ or Daesh, in Raqqa.”

I wanted it to be known, in this ‘secularist-Islamist dialogue,’ that I am someone whose wife has been kidnapped by Islamists, and whose brother too has been kidnapped by other Islamists. And this was to say that we were not having a dialogue as mere holders of ideas about religion and the state and the political, social, and legal system, but rather as people with particular pasts and histories; with experiences and misfortunes behind us; all of which define us and determine our positions and formulate our thoughts and politics. The abduction of Samira and Firas, and many other friends, by Islamists is an essential determinant of my identity today.

Those who invited me already knew I was a left-wing writer and former political prisoner. Among those present—some of them haraki (“activist,” as opposed to independent) Islamists—I believe I was the person who had faced the most harm at Assadist hands, as well as the most harm at Islamist hands. In both of the workshops, I spoke with the anger of someone Islamists had exerted efforts to persecute; not one to be assuaged by empty platitudes. In the second workshop, one of the non-haraki Islamist speakers was able to say he liked the style of some of the “secularist brothers” in their speech and participation; mentioning three or four names; but he didn’t like that of some of the others. And I alone was the “secularist brother” forming that latter group.

At the start of the first day of the second workshop, I had distributed to all present a lengthy printed text containing the verified facts we possess about the abduction; including details, dates, and names; which lead us to believe strongly that it is Jaysh al-Islam behind the crime. (The text is available in Arabic here.) And at the end of the following day, as everyone was getting up to leave, I asked to speak for a couple of minutes. I said I hoped the Islamist participants might issue a statement condemning the abduction of Samira, Razan, Wael, and Nazem in plain words. I said I understood completely if they didn’t join me in accusing Jaysh al-Islam, but I hoped they would mention in their statement that the families of the four had indications sufficient to substantiate the accusation against this entity bearing the word ‘Islam’ in its name, and that they would call for the immediate release of the four. I said that Islamists had an especial moral responsibility in this regard, given that the suspected culprits were among their own ranks. And it seemed to me that the group, who numbered twelve or thirteen, including two or three women, agreed to what I said, and I was promised that a text would be written soon, and would even be shown to me for my inspection. And, indeed, a text was sent to me a few days later, on which I did not comment. It was OK for me.

More than five months have now passed, and the statement of solidarity with the abductees, calling for their release and the revelation of their fate, has not been published, nor have I been told what happened to it. From my end, I haven’t sought any explanation. I presume the group changed their mind, after promising publicly in front of themselves and more than ten other people, without opposition from any of them at the time. I don’t wish to speculate as to what caused this change of mind, or their reason for not explaining their breaking of their promise to me. I wish only to record the fact that I asked for solidarity and support, face-to-face and in public, from Islamists both activist and independents, regarding the abduction by Islamists of my wife and other revolutionaries, and I received neither.

This isn’t the first time Islamists have been asked for help regarding the Douma Four’s kidnapping, and have refrained, even from mere expressions of moral support, or public statements of solidarity with the abductees and their relatives, denouncing the perpetrators, whomever they may be.

A friend of mine handed a letter to the Syrian Islamic Council in Istanbul in June 2016, in which we friends of the Douma Four requested the help of its clerics for a humanitarian and patriotic cause. Part of the letter read: “We look for strong support from you in this just and longstanding cause. And we renew our readiness to visit you at any time you deem appropriate to lay the case out before you and answer any questions you may have.” The reference to “renewing” our readiness recalled a previous visit we made to the office of the head of the Council, Sheikh Usama al-Rifai, in Istanbul, in May 2015, to request his assistance in the same regard. The then-commander of Jaysh al-Islam, Zahran Alloush, was visiting Istanbul at the time, and we saw then the warm reception granted him by the Council’s clerics, including Sheikh al-Rifai. It was said to us at the time that the Sheikh wasn’t around, but his office manager, who we met, promised us he would inform him and contact us to arrange a subsequent appointment. More than two and a half years later, that still has not happened. I recalled this in a public correspondence with Mrs. Nawal Sibai, the Syrian Islamist residing in Spain.

And prior to these three incidents, in January 2016, we addressed an open letter in the name of the “Friends of the Kidnapped Douma Four” to the leadership of Jaysh al-Islam itself, requesting that they respond to the call for arbitration we had previously issued to them in May 2015; that is, while Zahran Alloush was in Istanbul. The letter was delivered by hand to Muhammad Mustafa, a.k.a. Abu Maan, head of the Jaysh al-Islam politburo, who pledged to reply, and broke his pledge. As for the call for arbitration, we received no response whatsoever.

I think, then, we are entitled by these repeated incidents to conclude from the perpetration by Islamists of heinous crimes against anti-Assad Syrian revolutionaries; and the refraining by all other Islamists from taking the initiative to condemn these crimes and stand in solidarity with the families of the abducted, or rather their refusal to extend a helping hand to those families, even after such help has been requested of them repeatedly; I think we are entitled to conclude that those concerned cannot find it in themselves to openly distance themselves from the crimes committed by their peers, and that perhaps they identify with corrupt and criminal organizations such as Daesh, Jaysh al-Islam, and Jabhat al-Nusra, and find nothing in themselves and their convictions but estrangement from and indifference to those like us.

Not all of them, perhaps. I refer here to the repeated refrain in Islamists’ discourse about not making generalizations about them. This is right, although it’s rarely meant by this that there are exceptions among Islamist men and women with altruistic dispositions, which I don’t doubt. Much more often, the intention is to empty any criticism of Islamists’ conduct of its content, and to assert an opposite generalization: all Islamists, in fact, with rare exceptions, are just, and reasonable, and fair-dealing. Without doubt, the practices of Islamists are not homogeneous, but they certainly appear similar when it comes to dealings with non-Islamists, where they demonstrate a near-total lack of altruism; beneficence being restricted to those inside the group. This makes any potential Islamist justice regarding others mere self-justice; self-centeredness; with no possibility of genuine justice being realized through it.

More than sufficient time—four years—has been provided for them to speak the truth; to express a sense of justice; and they have not. That Islamists of various stripes have taken no initiative to condemn acts of aggression; and have refrained from offering to help confront these acts even after repeated requests from us to do so; and have broken their promises time and again; is ignoble behavior not worthy of respect. In my view, the recurrence of this hostility, and the contempt for justice shown by diverse groups of Islamists, suffice for one to speak of a prejudiced and inequitable pattern in the general behavior of Islamists, stemming from their composition, self-consciousness and their worldview. I shall examine the roots of this pattern on another occasion, in the hope of moving beyond the bickering over generalizations and exceptions.

The passing of four years since the abduction and disappearance of Samira is, for me, a decisive symbolic milestone, for it approaches the length of time she spent imprisoned by Hafez al-Assad (four years, one month, and eleven days). The struggle for political change in Syria was the defining struggle for Samira and myself; the struggle on which basis we built our identities. This is amply evident in Samira’s book, Journal of the 2013 Siege of Douma, and I believe it was equally apparent in my own work. Samira has now been disappeared by Islamists, and her liberation—with Razan, Wael, and Nazem—and the struggle against the Islamist culprits, has become a defining fight for me in turn. I would have preferred a single struggle, but two is not too many.

And there are already other struggles, unhappily.