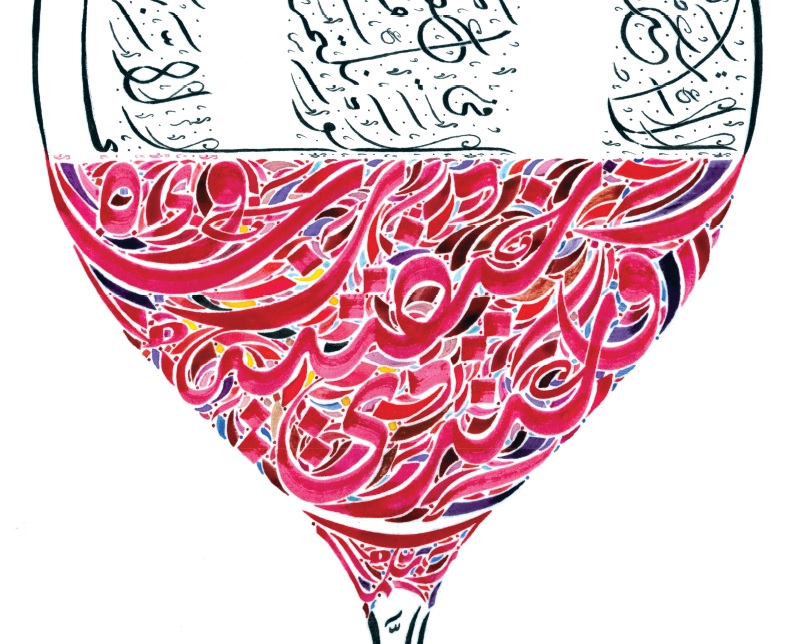 Why can’t a wine poem be Islamic?

In this exclusive extract from his upcoming book, Alex Rowell argues there is no reason the Arabic wine poetry of Abu Nuwas cannot be called ‘Islamic’.

[Editor’s note: The following is a short extract from the introduction to Vintage Humour: The Islamic Wine Poetry of Abu Nuwas by Al-Jumhuriya English editor Alex Rowell, due to be released in the UK on 28 December by Hurst. The extract forms the start of the author’s argument for describing the wine poems of the ninth-century classical Arabic poet Abu Nuwas as ‘Islamic’—an adjective choice that has met with some controversy. The extract is published here exclusively with the permission of Hurst, and may not be republished or reproduced elsewhere in any form.]

It might be wondered why the word ‘Islamic’ has been used next to the words ‘wine poetry’ in this book’s sub-title. It’s the hope of the author that, by the end of the book, the reader will be able to return the question: why not? Wine has, after all, ever been a permanent fixture of the Islamic universe. The social and cultural landscape into which Islam was born was steeped in drink, as the rich poetry of the unfortunately-named Jahili (‘Ignorant’) period amply attests. In the Qur’an, God Himself declares that wine has ‘benefits for the people,’ and indeed its consumption was fully permissible (halal) during Islam’s earliest years, when the Prophet was still in Mecca and for a time after his migration to Medina in 622. For the Prophet’s Companions (Sahaba) to drink during this period was routine; in fact it was precisely because a group of them, led by the esteemed ʿAbd al-Rahman ibn ʿAwf, had got drunk at a lunch and then misrecited the Qur’an at the evening prayer that the verse came down forbidding drunkenness at prayer times, according to orthodox exegesis. While the Qur’an later took a stricter line, urging Muslims to ‘avoid’ wine entirely, debate continued for centuries among theologians as to whether this amounted to a full proscription (tahreem), and, if so, whether it applied to all intoxicating beverages or solely the powerful khamr made from grapes. The Hanafi school of jurisprudence, for example, permitted consumption of the weaker raisin or date fermentation, nabeedh, and there are Hadiths alleging the Prophet himself drank the same (though it’s generally held that his was not sufficiently fermented to have been alcoholic).

In any case, Muhammad’s ‘court poet’, Hassan ibn Thabit (d. c. 659), was certainly an accomplished wine bard in his pre-Islamic days, and continued to include wine scenes in his verse after adopting the new faith. While he’s said to have given up actually drinking the stuff once the Qur’an discouraged it, the same cannot be claimed for another of the Prophet’s literary Companions, Abu Mihjan al-Thaqafi, a prodigious toper who famously almost missed the Battle of al-Qadisiyya in 636 due to the Caliph ʿUmar’s commander having imprisoned him for drunkenness at the time (he persuaded someone to let him out, and by all accounts fought bravely in the battle). Both poets had discernible influences on Abu Nuwas and were indeed quoted by him in tribute.

Thus never fully purged from the Muslim populace during the Prophet’s lifetime, wine would forever remain a feature of Islamic society thereafter. Most caliphs were drinkers, starting with the Umayyad Yazid ibn Muʿawiya (d. 683)—drinks partner of the great wine bard al-Akhtal—and continuing with few exceptions throughout the medieval age into the modern (Ottoman) caliphate. Some of these must be counted among history’s great imbibers. The Umayyad Caliph al-Walid ibn Yazid (d. 744), for instance, who went ‘swimming habitually in a pool of wine of which he would gulp enough to lower the surface appreciably’, once brought ‘wine and singing girls’ along on pilgrimage to Mecca in an (ultimately abortive) attempt to transform the Kaʿba ‘into a party tent’. The Ottoman Sultan Murad IV (d. 1640), killed by the bottle at just 27, ‘would shoot arrows at passersby from a window of the Topkapi Palace, or run disguised into the streets and kill random individuals with a sword, by way of inebriated amusement’. Muslim sovereigns beyond the Ottoman territories were no less spirited: in the four decades that the Timurid Sultan Husayn Mirza Bayqara (d. 1506) ruled from Herat, in today’s Afghanistan, ‘there was not a day when he did not drink wine’, and the Mughal Emperor Jahangir (d. 1627), whose affection for drink exceeded even his love of opium, went so far as to have coins struck depicting him luxuriously contemplating a goblet. As we have seen, at least one reigning ʿAbbasid caliph, and possibly a second, drank personally (and vigorously) in the company of Abu Nuwas.

Nor were caliphs alone with poets in this indulgence, naturally. Revellers at the Commander of the Believers’ court or the innumerable gatherings outside Baghdad’s city walls could include almost any member of respectable society, from princes to viziers to scholars to physicians. Leading doctors, indeed, wrote treatises positively recommending wine for its copious salutary qualities. For these same men to go on to write well-regarded commentaries on the Qur’an or shariʿa would by no means be atypical.

So ingrained, then, was wine in the classical Islamic period that the question is less how to reconcile the two than how to conceive of ‘classical Islam’ without wine. And if the two had blended in general since the outset of Islam’s arrival, in the poetry of Abu Nuwas they became particularly, indeed inseparably, fused. Almost every one of the thirteen thousand lines he penned betrays an Islamic signature in one way or another, as should be no surprise for a writer whose very first literary frame of reference in childhood was the Qur’an. Some of his forays into Scripture and theology have already been aired in the above extracts, and readers will encounter many more in the coming pages. As with so much else, Abu Nuwas took this to creative extremes: one sub-group of comic poems, which could be dubbed Qur’aniyyat, features entire lines lifted verbatim from the holy book and slotted seamlessly into the metre and rhyme scheme. Perhaps even more pertinent than the overt textual references, however, are the subtler linguistic and stylistic nods and allusions, which will also be highlighted below to the best of this author’s abilities. Suffice it in sum to say Abu Nuwas’ work could no more exist without Islam than Dante’s or Milton’s could without Christianity.

Does this suffice to call the khamriyyat [wine poems] ‘Islamic’? In his influential 1974 study, The Venture of Islam: Conscience and History in a World Civilization, Marshall G.S. Hodgson defined the adjective rather austerely as follows: ‘When I speak of Islamic literature, I am referring only to more or less “religious” literature, not to secular wine-songs, just as when one speaks of Christian literature one does not refer to all the literature produced in Christendom.’ Granted, one probably does not refer to the ‘Christian’ novels of, say, P.G. Wodehouse, or Ian Fleming. One might, however, conceivably speak of the ‘Catholic’ comedies of Evelyn Waugh, and Graham Greene, and when faced with the likes of C.S. Lewis and G.K. Chesterton the ‘Christian’ label is practically inescapable. The obvious difference lies in the authors’ treatment of the faith; how much Christian allegory or commentary or downright proselytisation is taking place; to what extent they are ultimately trying to say something intelligible and important about the religion. By this measure, the Islamicness of the khamriyyat can be in little doubt. The depth of the poems’ theological involvement, as already sketched above, surely precludes their dismissal as exclusively ‘secular wine-songs’. Much to the contrary, Abu Nuwas sought on some fundamental level in a great portion of his verse to make a fully serious statement about Islam – namely, that wine had a legitimate place therein. To deny the khamriyyat this label would be, in effect, to pronounce an Inquisitional verdict against the poet: to say that he was wrong about Islam and his prohibitionist opponents were right. Apart from anything else, it could hardly be the business of this non-Muslim author to handle so contentious a gavel.

[The author develops this argument further in the course of the book’s fifty-page introduction.]