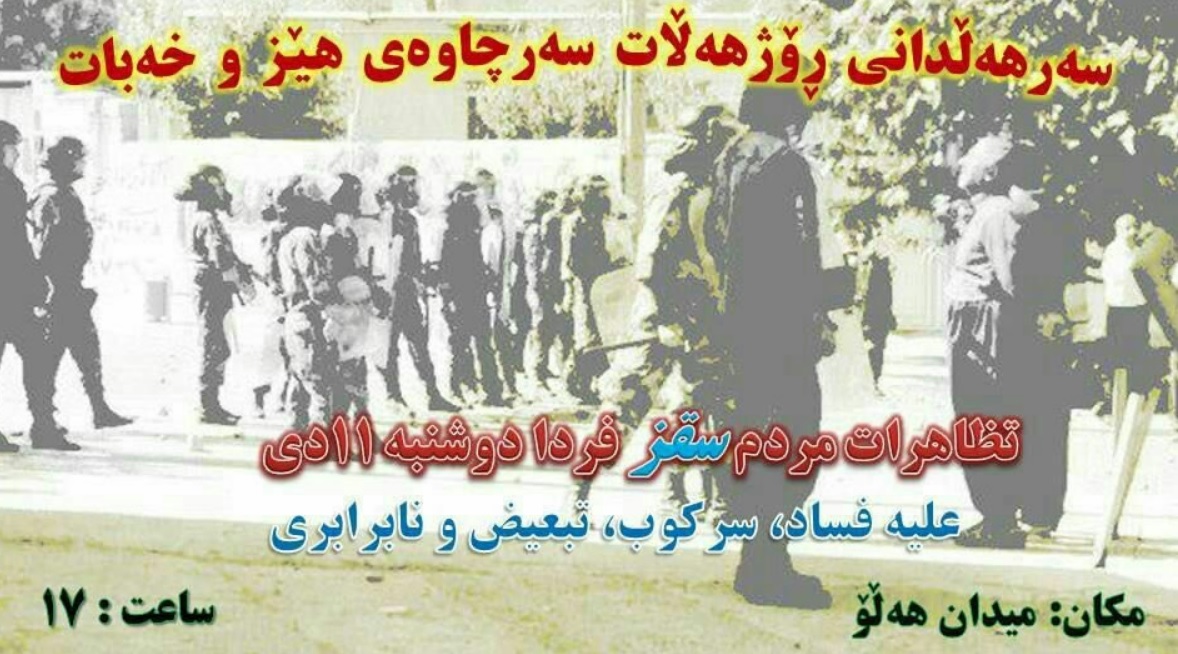 Syrian democrats are natural allies of the demonstrators currently being gunned down across Iran. May this mark a new chapter in regionwide, cross-sectarian solidarity, says Robin Yassin-Kassab.

Do revolutions move in circles? The uprisings which shook the Arab world in 2010 and 2011 were in some ways prefigured by Iran’s Green Movement protests of 2009. The years since have been so dominated by counter-revolution and war that many have despaired of forward movement. Yet one year after Iranian proxies crushed the revolution in Syria’s Aleppo, sparks of revolution are flying in Tehran.

These protests differ from those of 2009 in several important respects. The Green Movement was centred in Tehran, it was largely middle class, and it supported the reformist wing of the Islamic Republic against more authoritarian conservatives. The current protests, in contrast, are fiercest in the provinces, are largely working class, and often express rejection of the Islamic Republic itself.

It remains to be seen how far this angrier, more radical opposition movement will undermine or transform Iranian governance. On the one hand, its working-class character cuts at the heart of the regime’s legitimacy. The mustadafin or ‘downtrodden’ are supposed to be the base and prime beneficiaries of the Khomeinist wilayet al-faqih system, and yet they are chanting for the death of the Supreme Leader. On the other hand, this same subaltern fury may play into regime hands by scaring the middle classes. There is, after all, the Syrian example to point to, an image to strike fear into the hearts of rebellious people everywhere. If a regime is pushed too far; look, the result is war, terrorism, social collapse, and mass exile.

The Syrian example deployed as a threat may save Iran’s regime. The tragic irony here, of course, is that the Iranian regime has played a crucial role in creating the Syrian example. It is indeed to a large extent responsible for the disaster.

Yassin al-Haj Saleh has argued that Syria’s conflict gained a regional and sectarian dimension by April 2013. Two events in that month mirrored and fed each other. First, Hezbollah, a Lebanese Shia party-militia funded and trained by Iran, announced its participation in the Assad regime’s assault on al-Qusayr, a revolutionary town near Homs. Next, the Islamic State in Iraq and Syria (ISIS) declared its existence.

Iran’s proxy claimed it was defending Syria from nefarious Saudi-Salafist and Zionist plots, and implied that the slaughter of Syrians was a necessary step in liberating Palestine. ISIS, meanwhile, an Iraqi-led, transnational terrorist organisation, sought to position itself as a defender of Sunni identity in the face of Shia tyranny. Both sides did everything they could to crush Syrian hopes for democracy and self-governance.

Iran sent military and intelligence advisors to aid the Assad regime’s repression as soon as the 2011 protests broke out. As the Syrian army hollowed out through defections, desertions, and deaths in combat, Iran helped organize sectarian militias inside Syria to defend the dictator. When Lebanese Hezbollah’s input proved insufficient, Iran organized, trained, armed, and funded Shia jihadist militias from Iraq, Afghanistan, and Pakistan, and poured them into the Syrian theatre. Estimates of their numbers now reach 125,000. They constitute around 80% of Assad’s ground forces. Officers of the Iranian Revolutionary Guard Corps (IRGC), meanwhile, fight and die on Assad’s front lines.

But the intervention goes beyond military occupation. Iran has also assisted in, and sometimes guided, the Syrian regime’s sectarian cleansing of strategic areas. This became apparent shortly after Assad’s Iranian-assisted victory at al-Qusayr, when the Homs land registry was burnt and Shia and Alawite families were invited to settle in homes deserted by Sunnis. Since then rebellious Sunni communities have been expelled from their homes in Zabadani, Daraya, Muadamiyeh, the Barada valley, and elsewhere. In some cases, the families of Iran’s Lebanese and Iraqi militiamen have replaced them. “Iran and the regime don’t want any Sunnis between Damascus and Homs and the Lebanese border,” one Lebanese leader told journalist Martin Chulov. “This represents a historic shift in populations.”

Iran’s mobilization of an international Shia army against Sunni civilians and on behalf of a mass-murdering dictator does not weaken Sunni extremism but empowers it, as one would expect, by feeding its most paranoid narratives. Shia minorities in the Muslim world, who were already facing high levels of institutional and popular prejudice, will be among the long-term victims of this criminal policy. But everyone is paying the price. The Iranian and Syrian regimes (Saudi Arabia and others are also guilty) have deliberately sectarianized regional politics in order to divide and terrify populations that hunger for freedom and dignity. The results are both atavistic and apocalyptic.

The Iranian regime has spent billions on its occupations and interventions in Syria, Iraq, Lebanon, and Yemen. It hasn’t spent that money on the Iranian people or their infrastructure. It has allowed Iranians neither social justice nor political, intellectual, or social freedoms, and it has paralyzed all previous attempts at systemic reform.

Hence the angry potential of the current protests. Hence the popular chant: “Leave Syria, Take Care of Us.”

Syrian democrats and their supporters are celebrating the protests, showing solidarity and sharing their revolutionary experience with Iranians. There are two reasons for this. First, they know what it means to struggle against tyranny, to find the courage, take the risks, and pay the price. They would support anyone anywhere who does the same. Second, Syrians are immediately concerned by the fate of the Iranian polity. If Iran’s expansionism is reined in, so too must be Putin’s grand strategy. Without Iran’s army, Assad cannot hold Syria.

More than this, for the regional freedom project to move forward, it must overcome the sectarian and ethnic obstacles thrown in its path. Sunnis, Shia, and Christians, Arabs, Iranians and Kurds must struggle together and for each other as much as possible. The Iranian uprising represents the possibility of reversing the sectarian trend. Nothing undermines prejudice faster than a shared struggle against a common enemy, and today the IRGC is murdering people in Tehran and Isfahan just as it is in Idlib and the Ghouta.

Robin Yassin-Kassab is a Syrian-British journalist and novelist. His books include Burning Country: Syrians in Revolution and War (co-authored with Leila Al-Shami) and The Road From Damascus. He tweets @Qunfuz1.