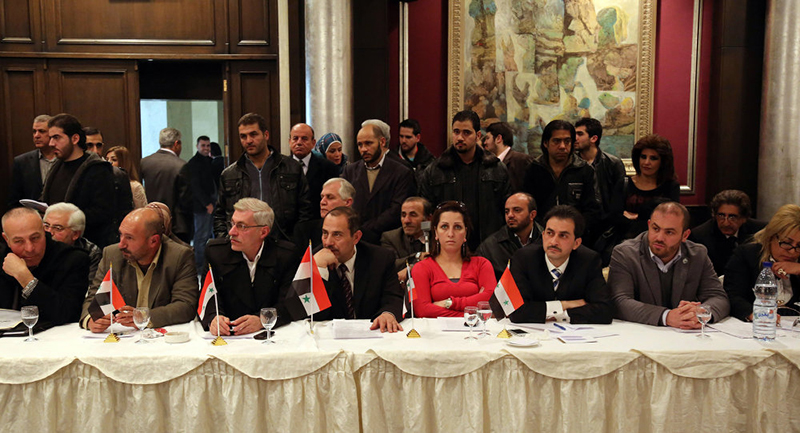 Snubbing Sochi: A message to more than one address

The Syrian opposition’s regional backers may be willing to submit to a Pax Russica, but the opposition’s boycott in Sochi showed they themselves are anything but.

[Editor’s note: This article was originally published in Arabic on 30 January 2018]

Tuesday marked the launch of the so-called Syrian National Dialogue Congress, better known as the Sochi conference, after the Russian Black Sea resort city in which it was held. The conference, announced by Moscow at the end of the seventh round of the Astana talks in October, was boycotted by the main opposition body, the Negotiation Committee for Revolutionary and Opposition Forces, which announced it would not attend after a ninth round of political resolution discussions held in Vienna last week.

Following the Commission’s announcement of its boycott, the so-called ‘Moscow Platform’ group within the Commission was quick to declare its innocence of the decision, in that its representatives had voted, along with a number of other members, in favor of going to Sochi. Various leaks in the final hours suggested the possibility of certain Commission members participating in a personal capacity, though the National Coordination Committee, which is also part of the Negotiation Committee, announced via its head Hasan Abd al-Atheem that it would adhere to the boycott decision.

These developments, which were tied to regional and international political moves in recent days, were part of a wider bundle of reorientations that also bore field consequences on the ground in Syria.

A number of sources close to the opposition say the Negotiation Committee faced great pressure from Saudi Arabia and Turkey to attend the Sochi conference; a fact which made last week’s visit by a Committee delegation to Moscow to meet Russian Foreign Minister Sergey Lavrov appear to herald acceptance of the Sochi invitation. The emergence, however, of the United States’ position during a mini-meeting in Paris on the sidelines of the International Partnership Against Impunity for the Use of Chemical Weapons conference granted a margin to the “No” vote that the traditional allies of the Syrian opposition in the region no longer provided.

From Paris, the states meeting, which included the US, France, Britain, Jordan, and Saudi Arabia, put out an “unofficial” paper containing proposals about the form of a new Syrian constitution; limitations on the president’s powers; and the granting of greater political authority to “provincial governments.”

Both the Syrian regime and the ‘Moscow Platform’ rejected this paper, which carried political messages from Washington about the Sochi conference more than it did recommendations about the UN negotiations track. For the new articulation of the American position, and Western reservations about Sochi, in addition to the Paris meeting and its results, created a margin for the Syrian opposition to reject attendance at Sochi at the last minute, after the Negotiation Committee had delayed announcing its stance until the end of the talks in Vienna.

The opposition and the region

The declared Turkish, and undeclared Saudi-Emirati, positions regarding Sochi marked a new turning point in the opposition’s traditional allies’ handling of the Syrian question; a spectacle that began in late 2016 with Turkey’s engagement with the Astana talks held under the joint auspices of Ankara, Moscow, and Tehran. As for the Saudis, it was the Riyadh II conference last November that most clearly indicated the transformation in their position toward Syria.

These regional shifts were a result of numerous wider political and military changes in the region, particularly within Saudi Arabia and Turkey, interwoven with a desire among policymakers in these countries (remaining undeclared throughout the last two years) to “be done with the Syrian file” and the “complications” it brought to their policies.

A similar path had already been taken by Qatar, perhaps best expressed in the famous remark by Doha’s former Foreign Minister Hamad bin Jassim that, “We [Gulf states] fought each other over the prey [i.e. Syria], then the prey got away.” That remark may serve as a précis of the overall current regional position regarding Syria, the main justification for which has been “the American retreat” from Russian and Iranian ascendancy in the Middle East, though Washington’s latest stance could be an opportunity to reexamine the regional powers’ positions, in particular the traditional allies of the Syrian opposition, which have otherwise tended toward acceptance of the Russian solution in Syria (reviving the Syrian regime; imposing a military solution; eliminating any and all chance of a political opposition existing), in exchange for extinguishing the immediate dangers faced by their policies and aspirations in the region.

A structural transformation in the Syrian opposition

The Syrian opposition, represented by the Negotiation Committee, was able to refuse to attend the Sochi conference in a test of the new structure produced at Riyadh II, even if the mines carefully planted inside this structure will be prone to explosion at any moment, to pave the way for the termination of one of the opposition’s major institutions, in the absence of any regional desire to support the cohesion of these institutions. The invitation document that was leaked on social media looked to be a clear expression of the position of regional states toward the opposition, for three personalities—Rim Turkmani, Randa Kassis, and Ahmad al-Jarba—were entrusted with sending out invites to more than three hundred people ostensibly representing a segment of the opposition. These three represent a model for relations transcending the regional and international conflict, in addition to a murky stance regarding the opposition’s political demands for a resolution, which makes them, perhaps, the ideal model for the new generation of the Syrian opposition. And if the leaked list of invitations is correct, then it marks a new shift in the structure and form of the so-called Syrian opposition. For after the change that occurred in the Astana talks, where the politburos of the armed factions bore the responsibility of negotiating with the regime, it seems that these (old-new) faces could be an expression of the course Moscow wants to impose, with regional consent, embodied in a new form of negotiation based on a Russian vision, the essence of which is the start of what it calls “a national dialogue,” to end with the regeneration of the regime, and its coronation as a key decider of the fate of the conflict in Syria.

In spite of these regional shifts, and the military progress attained by regime forces in Idlib, under the cover of Russian aircraft, in Sochi Moscow was not able to achieve even the façade of the Astana track, for even those military factions and political forces tied organically to the Turkish position  were not unanimously agreed on going to Sochi, and some of their representatives who did go refused to leave the airport on arrival, in protest at the use of the regime flag on the conference insignia, which is what caused the delay in the start of proceedings. This failure of Moscow’s, which lent the whole conference a farcical air, marked a blow for its strategy for the “post-military-victory” phase, prompting it to respond with massacres in various cities and towns across Idlib, most notably Saraqib, which is facing a large-scale air bombardment campaign as a message to those who spoiled Putin’s conference.

In the end, it appears regional powers’ beliefs about their absolute control over events in Syria have turned out to be far from well-placed.