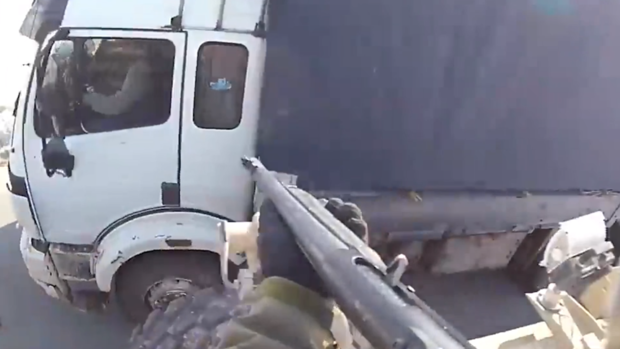 Recent footage of US soldiers drive-by shooting an Afghan truck driver fits a well-established pattern of cruelty and criminality—yet Afghans who report these abuses are still invariably met with disbelief.

Last month, a scandalous video came to light showing a compilation of footage from recent American military operations in Afghanistan, set to a jaunty background of hip-hop music. Compiled as part of a marketing campaign for a military apparel company, Happy Few, the video showed US troops firing a variety of weapons, including an Italian-made Benelli shotgun, which—in the scene that caused most outrage—is filmed opening fire at close range on the driver of a truck; his side window shattering as the American vehicle overtakes him.

The US army has implicitly acknowledged the authenticity of the video, with a spokesman telling Reuters he was “disappointed and also concerned” by it, adding that he “reject[s] the unprofessional and callous message this video conveys.” An official investigation has been launched.

The exact circumstances of the shooting have not yet been established. The New York Times quoted a Special Forces soldier with “direct knowledge of the incident” as claiming it involved no violation of the military’s rules of engagement, with the weapon firing “less than lethal rounds”—a claim the paper said was supported by the absence of “recoil or a discharged cartridge.” Even so, the paper added, such ostensibly non-lethal rounds as bean bags or rubber bullets can kill at close range, and Politico cited a former special forces operative with experience fighting in Afghanistan as saying his unit “never carried non-lethal rounds on mission.”

All available evidence suggests the video was filmed in the eastern province of Nangarhar, which has become the center stage of the US military’s war against the Islamic State in Khorasan Province (ISKP); the Afghan ISIS cell. In 2017, Nangarhar was the principal target of Donald Trump’s escalating bombing campaign in the country, with more airstrikes causing civilian casualties there than in any other province, according to UN data. It was also in Nangarhar that the US dropped its so-called Mother of All Bombs (Massive Ordnance Air Blast), the Pentagon’s largest non-nuclear weapon, in April 2017.

These ongoing events have taken the dehumanization of the Afghan people to new depths. Whether Afghans are being killed by drone strikes and conventional aircraft, or by gigantic bombs, too often the identities of the true victims remain in the dark.

The new shooting video provides yet more reason to believe these things do not happen by accident. For many American soldiers, killing innocent Afghans has evidently become a matter of fun; a lark to be accompanied by Kendrick Lamar’s beats. The phenomenon may be news to many in the West, but for Afghans familiar with events on the ground, it is not.

When I saw the video myself, I was neither shocked nor surprised. As someone who tries to investigate American war crimes in Afghanistan, seeing a US soldier shoot a random truck driver is not something new. Since the war started in 2001, there have been countless accounts of such events. Abducting innocent cab drivers and torturing them to death in secret prisons. Hunting Afghan teenagers for sport and collecting their body parts as trophies. Shooting toddlers and women en masse in a drink-fueled rampage. Thanks to the “War on Terror,” this has been part of Afghanistan’s reality for nearly two decades.

But since many of these stories are spread by Afghan voices, few in the Western world want to listen.

As long as the narrative is spread by “locals,” there is always reason to doubt. To judge by news reports and the behavior of Western observers and journalists, this seems to be an unwritten rule that has become standard practice. Even after the recent shooting video was spread, it appeared that many people doubted the cruel reality of the Afghanistan war, naively continuing to believe Western armies invaded the country to spread democracy and freedom and win hearts and minds.

As far as most Afghans are concerned, it was never about winning hearts and minds. Our reality, instead, has been shooting, killing, and torturing.

Perhaps it would be instructive for Americans to picture the reverse scenario, in order to better visualize the Afghan perspective. Suppose that Afghan soldiers and their allies; maybe from Iran, Pakistan and some Arab countries; invaded the United States and started to drone bomb random people out of their remote cockpits in Kabul and Kandahar. Soldiers conduct night raids to kill “terrorists,” but in many cases, they kill civilians like children and pregnant women before they disappear in the dark of the night. At the same time, Afghan politicians sign contracts with bloody, right-wing extremist warlords and militiamen—people who are interested in many things but certainly not in the fate of their own people and how many of them are getting destroyed.

Last but not least, after committing war crimes, the responsible ones might say they are going to conduct an “investigation,” which will lead to nothing, as usual.

Perhaps, having carried out such a thought experiment, Americans would be able to see this latest video as something other than freedom fighters hunting down terrorists.

Emran Feroz is a journalist and author based in Germany, and the founder of Drone Memorial, a website that lists the victims of drone strikes. He tweets @Emran_Feroz.