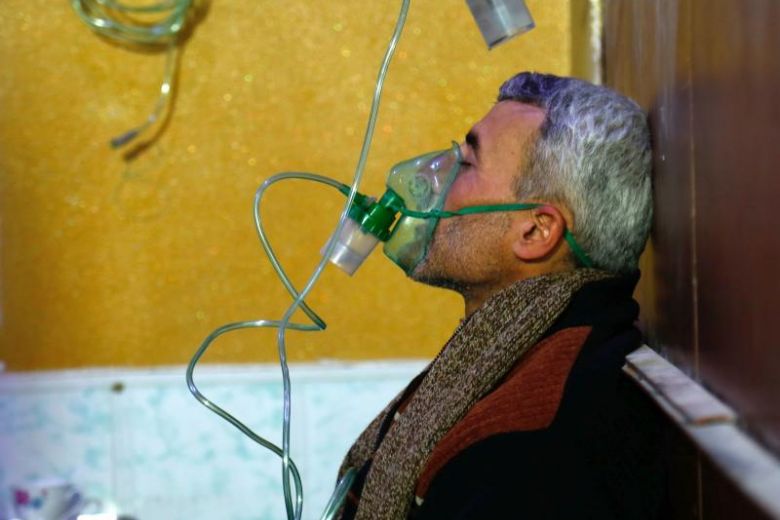 By declining to link their attack on pro-Assad forces earlier this month with the regime’s ongoing chemical weapons use, the US has failed to deter the latter, argues James Snell.

Amid all that has occurred since, it is easy to forget what happened in Syria at the start of this month. First, as February began, the regime of Bashar al-Assad was credibly accused of several chemical weapons attacks on civilian areas, during routine airstrikes against non-military targets. And second, days later, the American-led coalition killed over 100 pro-regime fighters who had attacked a detachment of the Kurdish-led Syrian Democratic Forces (SDF) and the US troops escorting them east of the Euphrates.

The former was different even from the regime’s usual violence. Reports of chemical weapons use allege that chlorine gas had been deployed in Douma, in the besieged Damascus suburb of East Ghouta, and in Saraqeb, a town in Idlib. Together, these and other incidents in which the regime is alleged to have used chemical weapons signal something significant. They indicate that Assad and his allies either feel sincerely immune from international sanction or wish to test that proposition to destruction.

Both cases represent a direct challenge to the international community.

The latter was no fleeting engagement. Fighting between the American-supported SDF and pro-regime forces apparently lasted around three hours, involving extensive American air support and the use of artillery. Among the dead, it was reported, were Russian contractors, freelancing in Syria as part of the “Wagner” mercenary force.

This was an extended battle against multiple international rivals, in which over a hundred were killed. A serious engagement to counter unjustified aggression, following on from brutal regime attacks on civilians and possible chemical war crimes.

The United States may have been justified in feeling that this timing was fortuitous. American envoys could write the latter off as a consequence of the former. The Assad regime could be both humiliated and warned. And further action would not be needed, negated by retroactive rhetoric.

But this did not occur. Instead, the Americans remained rigid. Their forces had fought off an attack, acting in self-defence to protect a proxy against aggression from the regime and its affiliates. That was the line, and the line was to be held.

The US defence secretary, James Mattis, said that there was no “initiative on our part,” which would have been in evidence “if we were getting involved in a broader conflict.” Mattis was defending the administration from the charge of sleepwalking into open warfare in Syria, and thus could be expected to demur when confronted.

But Dana White, an assistant to the secretary of defence for public affairs, had no such immediate objective. She told reporters the United States was not “looking for a conflict with the regime.”

The result of all this is explicit and definitive, even after all the condemnation and diplomatic remonstration which the regime’s chemical attacks merited. It speaks for itself.

Observers must be clear. A retrospective reclassification of this action would have been cheap and short-sighted. It would not have solved the problem of the regime’s continued use of chemical weapons or punished that use sufficiently. But it would have been something. It would have signalled some intent, no matter how small, to do more than condemn the regime’s actions from afar.

Even that intent was lacking. Instead, the United States continues its inconclusive policy in Syria—fighting back when directly attacked, but otherwise failing to rise to even the most grievous provocations.

The red line drawn by the president, Donald Trump, and followed by his administration only encompasses the use of Sarin. It will not be extended. Chemical weapons which are not nerve agents do not worry the United States, and fail to prompt even internationalist gestures in its leaders.

And this comes at a time when more than gestures are needed. Previously, the United States and many of its allies were able to maintain that—in part because of his involvement in chemical war crimes, and innumerable other unconscionable acts—Assad must leave office and a meaningful political transition take place. This view of things, never enforced or entirely believed by American officials, survives now as a rhetorical crutch. Last year in particular, the diplomats of the United States responded to regime transgressions by deploying that old formula. Even the words themselves failed to make an appearance this time.

In light of more recent events, notably the substantial Israeli strikes on regime targets, including the apparent destruction of up to half of Assad’s air defence capacity, the American response to regime incursions on the other side of the Euphrates may be minimized, even forgotten. The same is likely true of the chemical outrages which preceded that episode, with both sinking slowly from view behind more recent occurrences.

This is unfortunate, not least because both events could have proven salutary. The world at large could, given time, have developed a sincere appreciation of the fact that the regime will likely never give up its chemical weapons unless it is punished beyond endurance. And the United States may have realised that its Kurdish proxy will never be safe from regime attack while pro-Assad forces believe they have the wind at their backs—and reckoned with the fact that the world did not end when American men and machines killed large numbers of regime soldiers and Russian contractors.

But these things will not be understood without conscious effort. Forgotten, they will recede conveniently into the background, as past events unlikely to resonate in a fast-moving war. America’s leaders wish to defend themselves from the implications of recent events, just as they reflexively defended their forces and allies. But those implications must not be forgotten. If they are not, the lessons of the last two weeks may still be learnt, which is the only way to ensure those events have any meaning.