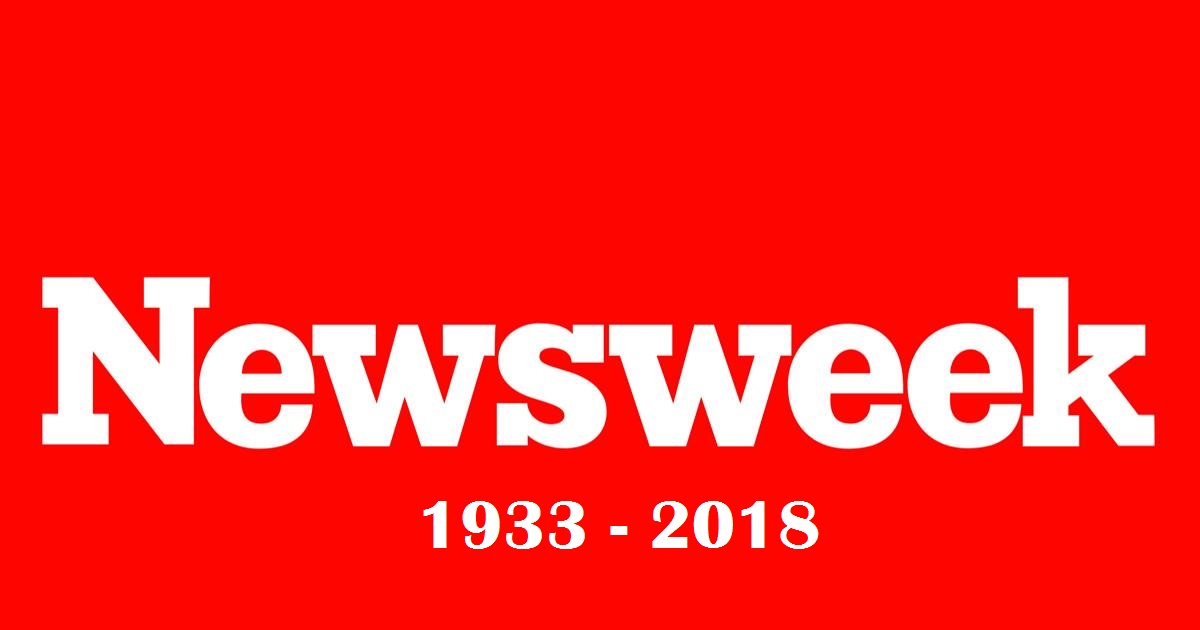 In a final death knell for the once-great magazine, Newsweek has stooped in recent days to printing crackpot conspiracy theories about chemical weapons in Syria.

The magazine known to the world since 1933 as Newsweek is no more. A simulacrum of it still exists, in name, but the publication that once helped light the path of history—lending its platform to the civil rights movement in the ‘60s; helping launch impeachment processes against both Nixon and Bill Clinton; and being the first magazine to put then-Senator Barack Obama on its cover—is gone; another casualty of that increasingly familiar combination of financial woes (actually alleged fraud, in Newsweek’s case) and a new generation of management priding itself on know-nothing philistinism.

For Syria-watchers, nothing has made this demise clearer than the saga that began on February 8th, with Newsweek’s publication of an article by a previously unknown writer, Ian Wilkie, titled ‘Now Mattis Admits There Was No Evidence Assad Used Poison Gas On His People.’ As the title suggests, the piece was premised on an excruciatingly embarrassing misunderstanding of remarks by US Defense Secretary James Mattis, on the one hand (as the writer later admitted), and an amalgamation of the usual tinfoil-hat denialism about Assad’s chemical weapons use found in far-right, far-left, and pro-Kremlin echo chambers (it can be difficult to tell the three apart).

When Newsweek later invited the respected investigative journalist Eliot Higgins to write a piece correcting the record, it appeared for a moment the magazine had recognized their terrible mistake, and were trying in good faith to make amends. In retrospect, that they never retracted Wilkie’s original article, now completely discredited by Higgins in the pages of their own publication, should have been an obvious alarm bell.

Instead of disowning Wilkie—a man proven incapable of comprehending plain English, who has suggested Mossad was behind the 2017 Sarin attack in Idlib’s Khan Shaykhun (recently confirmed by the Organisation for the Prohibition of Chemical Weapons to have been the work of the Assad regime, as no serious observer ever doubted)—Newsweek followed up with a second piece by him on Saturday, this time titled, ‘Where’s The Evidence Assad Used Sarin Gas On His People?’

Needless to say, the reader learns very little about the vast and incontestable evidence that Assad used Sarin on “his” people. We do learn slightly more about the troubled mind of Ian Wilkie, however. He believes, in a turn of phrase worthy of Ben Carson, that “the jihadis arrayed against Assad ascribe [sic] to a doctrine of deception called taqiyya;” an obscure theological concept in fact more closely associated with Shia Islam than Sunni Salafist-jihadism. He asserts, falsely, that the nerve agent Tabun is more lethal than Sarin, in the course of attempting to demonstrate his self-professed expertise on chemical weapons. He describes himself variously as a “terrorism expert,” an “international lawyer,” and a “counter-terrorism practitioner.” (On LinkedIn, he adds “international security expert” and, most impressively, “cannabis industry entrepreneur.”) He can barely write. Perhaps strangest of all, he implies in closing that it wouldn’t much matter if Assad had used chemical weapons, for “Nobody puts down a rebellion, especially a terrorist-enabled one, by following the laws of war.” One’s reminded of those anti-Semites who both deny the Holocaust and blame the Jews for it.

The day after Newsweek published Wilkie’s first article, I wrote that if the editors didn’t take it down, and fire whoever was responsible for it, they would have degraded their publication’s name irreparably. As of Saturday, that ship has now sailed.

And yet, it must be said the magazine didn’t act in a vacuum. A number of other once-reputable journals, including the London Review of Books and Germany’s Die Welt, have also sullied themselves in recent years by printing crackpot conspiracism about Assad’s Sarin habit. Similarly, by publishing the flagrant disinformation ejected by Iran’s Foreign Minister, Mohammad Javad Zarif, flagship outlets from the New York Times to the Washington Post to the Guardian to the Atlantic have each helped create an environment in which it’s no longer beyond the pale to print exonerations of a regime that attacks children with weapons of mass destruction. This is about more than the accelerating race to the bottom in the quest for ‘likes’ and ‘shares;’ it’s also about a broader intellectual and moral degradation of the value of truth and, ultimately, human lives. Without a conscious, unwavering effort to combat it, the rot that has undone Newsweek today might just as easily be found consuming anyone else tomorrow.

Alex Rowell is the managing editor of Al-Jumhuriya English. He tweets @alexjrowell.