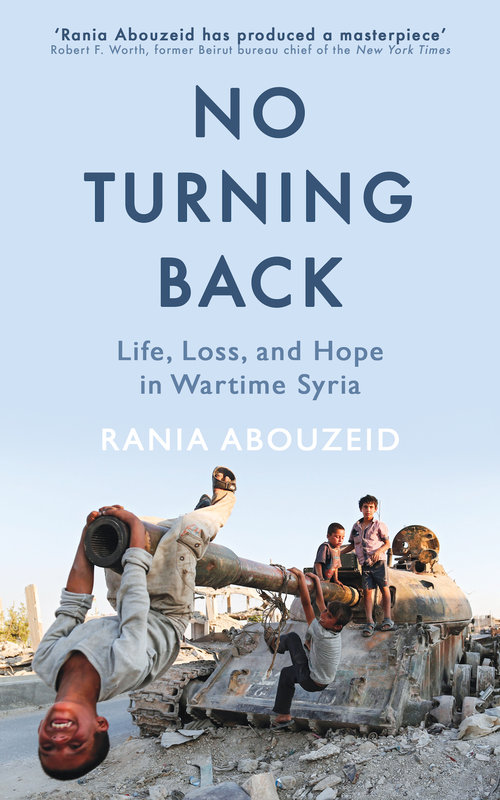 Rania Abouzeid’s forthcoming book, No Turning Back: Life, Loss and Hope in Wartime Syria, succeeds in humanizing the individual participants in Syria’s agony—victims as well as villains.

As this review was being written, the bombs in Syria continued to fall; not just the persistent background percussion of ordinances that most of us have become inured to, but a dramatic and devastating escalation. Suddenly, Syria surged back into the top headlines, where it will stay for a period of time before fading, once again, into the background. It’s a cycle that has been repeated continuously throughout nearly seven years of war: atrocity; outrage; inaction; indifference. Events that should be shocking have become normal, making it easier to view what is happening in the abstract, detached from the stories of actual people.

Rania Abouzeid’s forthcoming book, No Turning Back: Life, Loss and Hope in Wartime Syria, breaks through that veil of abstraction. Set to be released on March 15th, the anniversary of the uprising, it is an intimate portrait of what has unfolded since 2011, and an important reminder that it is individuals—with all of their admirable and deplorable characteristics—who are at the center of the conflict. In some cases, the people whose stories Abouzeid follows are directly involved in helping to shape the course of events. In others, their lives are simply caught up in, and irreversibly altered by, the brutality unfolding around them.

For those who have followed the course of events in Syria, Abouzeid’s work is likely familiar. She has covered the ahdas, as they are often called in Arabic, since 2011, for publications including Time, The New Yorker, and Politico, picking up a number of awards along the way. Despite the longevity of her perspective, No Turning Back does not pretend to be a sweeping history or authoritative account of the Syrian uprising and civil war. Instead, it focuses on the lives of the individuals who Abouzeid follows from the early rumblings of unrest in 2011 through the progressively darker years that have followed, until the end of 2016.

The overall arc of the events that contextualize the lives of the people in the book will be known to anyone who has paid attention to what has been happening in Syria. But told through the lens of individual stories, various key episodes in the evolution of the conflict are seen in a new and personal light that is shocking in its level of detail.

One such episode is the role of Okab Sakr, a Lebanese politician aligned with the Future Movement of Prime Minister Saad al-Hariri, in the early efforts to arm the Syrian opposition. The Future Movement is part of the anti-Damascus March 14th coalition, and the Syrian regime is widely suspected of having played a role in the assassination of Rafiq al-Hariri, Saad’s father. “We have a history with this regime and we want to support you. If this revolution succeeds, we all succeed, and if it doesn’t, we are all affected,” one of Abouzeid’s sources, a representative of an armed rebel faction, recalls Sakr saying.

During the early months of 2012, as the situation morphed from a peaceful uprising into an armed insurgency against Syria’s brutal security forces, the Future Movement, through Sakr, was sending at least $50,000 a day to support opposition fighters. “There wasn’t an envelope that would hold the amounts we were getting, it was in bags,” Abouzeid’s source recalls.

In another startling scene, Abouzeid recounts how a civilian activist in Saraqib, in Syria’s northwest, disposes of an unexploded Sarin canister in a plastic jar usually used to hold homemade pickles. The indifference of the international community to the use of chemical weapons in Syria is no revelation. But the sense of abandonment Abouzeid captures is still striking.

The activists who recover the canister reach out to the Organization for the Prohibition of Chemical Weapons (OPCW). But the OPCW doesn’t conduct an investigation or even recover the unexploded weapon. “What are we supposed to do with it?” asks an activist from Saraqib, who spoke to Abouzeid. “After months, they told us to hide it in a cave underground and don’t tell anybody that you have a chemical weapon.” The inaction of the international community is crushing. “Nobody cared about us or about international laws and forbidden weapons,” the activist tells Abouzeid. “It made me want to just wait for a barrel [bomb] to fall on me.”

Perhaps the most impressive of Abouzeid’s reporting is on the formation of Al-Qaeda’s Syrian affiliate, Jabhat al-Nusra, and the split within the group that led to the rise of ISIS. Two of the people Abouzeid follows are Nusra insiders, including one in the inner circle of Nusra leader Abu Muhammadal-Jolani. Through these sources, and others, she is able to provide an inside account of the growing tension between Jolani and Abu Bakr Al-Baghdadi, the now infamous leader of ISIS.

In early 2013, the tensions are coming to a head over a dispute sparked by the presence of veteran Al-Qaeda fighters from Pakistan and Afghanistan in Syria. In a message delivered by courier, the leader of Al-Qaeda, Ayman al-Zawahiri, instructs Jolani to help the fighters reach Europe. According to Abouzeid’s recounting of events, Jolani does not inform Baghdadi, who has recently relocated from Iraq to Syria. When Baghdadi finds out about the men, he confronts Jolani. “Why didn’t you tell me that you have emissaries from [Afghanistan and Pakistan],” Abouzeid directly quotes Baghdadi as saying. Jolani eventually takes Baghdadi to meet the group at Aleppo’s Eye Hospital.

Shortly thereafter, Baghdadi calls for a meeting with all of Nusra’s senior leaders. The gathering takes place “in a basement under its training camp in Ras al-Hosn” in northwestern Syria, a location that doubles as a prison. “The proceedings were interrupted at one point after Baghdadi learned that a Syrian army general was a prisoner at the camp,” according to Abouzeid. “Baghdadi wanted to see him. He walked the general above ground, shot him dead, and returned to the meeting.”

Feeling threatened by Baghdadi’s actions, Jolani embarks on a tour of the provinces under Nusra’s control to try to shore up his support. But it’s already too little, too late. On April 8, 2013, Baghdadi announces the merger of the Islamic State in Iraq and Nusra to form ISIS. Jolani is “blindsided,” learning about the merger in the news. In a “six car convoy,” he races from eastern Syria back towards his base of support in Idlib and Aleppo. “At Tabqa, Jolani switched cars, as he often did, stepping out of a black Toyota FJ Cruiser into a Honda Accord,” writes Abouzeid. “The FJ Cruiser blew up an hour later.”

The level of detail, including precise locations, direct quotes, and insight into the thoughts of senior Nusra and ISIS leaders, is astonishing considering the difficulty—and danger—of gaining access to the inner circles of these men, among the most wanted by intelligence services across the world.

Yet perhaps the most captivating storyline revolves around something far more quotidian and, ultimately, profound, given the circumstances: the perspective of a nine-year-old girl named Ruha.

Ruha is from Saraqib and has “graceful long limbs (although she was still awkwardly growing into them)… fair skin, quiet poise, and tight curly brown hair.” Her father is involved in the protests in their town, and in the first scene of Ruha’s story, security forces are breaking into her family’s home to search for him. Fortunately, he is not there, something Ruha is forced to get used to. “Baba used to stay with us all the time, then we didn’t see him anymore. We used to play on the streets, then we started to be afraid we might be shot,” the young girl reflects to Abouzeid. “We were fated to learn about things children shouldn’t learn about… I know my parents were trying to hide things from us, but they could not. Everything was happening in front of us.”

As her life and family are forever altered, Ruha is remarkably clear-eyed and reflective about what is happening around her. Her conversations with Abouzeid, over the course of six years, provide a window into the most intimate effects of the war through the eyes of a child whose life is shaped by its course. Ultimately, it is this level of intimacy, which Abouzeid captures in all the storylines in the book, that truly sets it apart. At times, especially when it comes to the Nusra members, that closeness can be uncomfortable.

Mohammad, one of the characters, is a Salafi-jihadist who becomes a Nusra emir, or commander. He is a man with a violent, sectarian worldview that he is working to bring to fruition. During one of Abouzeid’s meetings with him, he receives a WhatsApp video message from his daughter across the border in Turkey. “Baba, when will you come home?” the little girl asks. “Khalas, enough. I miss you.”

“I miss you, too,” Mohammad responds, “but you know I’m here because I have work to do.” It is a relatable and mundane familial moment far removed from the caricatures of evil usually used to depict men like Mohammad. Some readers may object to this humanization, but as much as Abouzeid humanizes, she makes no excuses for the worldviews of the people she follows, nor does she try to place any of them on a pedestal. The depictions are three-dimensional and complex. These are people whose lives are caught up in war; people who experience horrible things and, in some cases, do horrible things to others. It is a refreshingly unsentimental and un-moralizing regrounding of what is happening in Syria.

The one shortcoming of No Turning Back is that, of all of the stories Abouzeid follows, only one focuses on a character living in an area controlled by the regime. And the storyline is rather brief—about a father whose daughter is kidnapped by Nusra—compared to the others in the book. Abouzeid acknowledges the limitation up front and says it is due to the fact that, early on, Assad’s government issued several warrants for her arrest, which restricted her access to areas under regime control. As a result, the book encompasses a multitude of perspectives from the many veins of Syria’s fractured opposition, but shows very little of what life has been like for individuals living in areas controlled by the regime.

Nonetheless, No Turning Back is essential reading for anyone seeking to better understand the past seven years in Syria, in all of their brutality, tragedy, and human complexity. The intimate portrait of the war captured in its pages will not solve the problem of indifference or answer any of the bigger political questions surrounding the conflict, but that is not the point. It is a book that bears witness and records the experiences and perspectives of individuals caught up in one of the most momentous, complex, and tragic events of our time, which in and of itself is a form of dignity and justice for the people whose stories are told, and a gift to the readers who open its cover.

Eric Reidy is an investigative journalist based in Beirut. He tweets @Eric_Reidy.