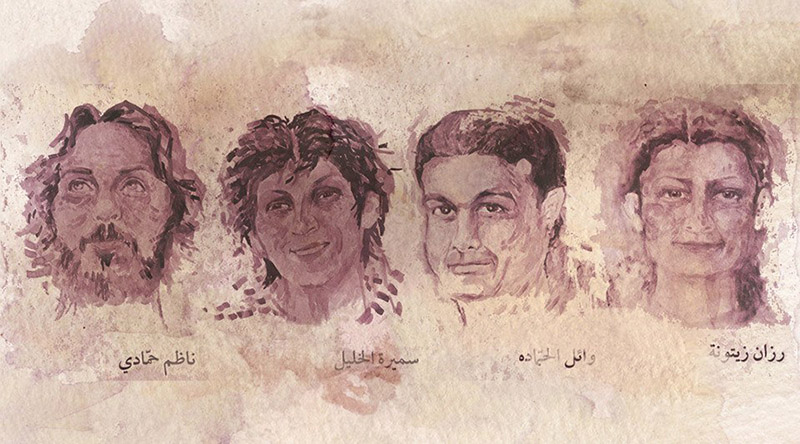 An appeal: Where are the Douma Four?

With Eastern Ghouta’s remaining residents in peril like never before, friends and relatives of four renowned civil society activists abducted there in 2013 appeal for their long-overdue release.

Friends of the Douma4

[Editor’s note: This appeal is also published in Arabic]

As tens of thousands of Eastern Ghouta residents are in the process of being displaced, with more likely to join them; and great numbers placed in temporary shelter centers, subjected therein to physical and socioeconomic humiliation by the Bashar al-Assad regime’s security apparatus; those in the hardest position of all are the Douma Four, the civil society activists abducted and ‘disappeared’ in the besieged enclave four years and four months ago.

All available evidence points to the Jaysh al-Islam (“Army of Islam”) opposition faction being responsible for the abduction of Samira al-Khalil, Razan Zaitouneh, Wael Hamade, and Nazem Hamadi, in an effort to impose its authority uncontested over Douma, within a context known also to have involved assassinations and detentions, the many victims of which included Abu Subhi Taha and Abu Nadhir Khabiyya, who faced brutal torture, and were not released until recently, just in time to be displaced along with their neighbors.

We, the relatives and friends of the Douma Four, have requested help from entities of many kinds, after making available to the public the powerful evidence implicating Jaysh al-Islam alone in the abduction, and we regret that we are forced to repeat this appeal for assistance today. We implore everybody, in any and all political, humanitarian, cultural, or religious body, to take responsibility and raise their voice in this regard. Samira, Razan, Wael, and Nazem are not unknown people, neither during the revolution nor prior to it, and their cause is renowned throughout all of Syria and to a large extent around the world. It is inconceivable that the emirate that founded itself on kidnapping, detention, torture, forced disappearance, and assassination should disband today with the fate of its victims remaining a mystery. There is no justice, no conscience, no law, and no cause that could justify those able to speak persisting in silence.

Those who gave the order to kidnap the Douma Four are known by name, and those who wrote death threats to Razan are known by name, and they are likely to be the ones who undertook the abduction. Similarly, the man who authorized other assassinations and detentions, and enjoined the kidnapping of the Four, is known by name. We call for holding those concerned to account, and uncovering the truth about the fate of these two women and two men.

We want the immediate release of Samira, Razan, Wael, and Nazem, and assistance in pursuing and indicting the leadership of Jaysh al-Islam—its security, religious, military, and political officials—for their perpetration of this crime, and many others beside it. If these people are able to escape their deserved punishment, then how can we demand that Bashar and his henchmen not escape theirs?

Samira, Razan, Wael, and Nazem were not carved out of trees; they have family, loved ones, and friends who have borne the pain of their absence without help from public entities for more than fifty months. Today they ask: where are our loved ones? Why is nobody saying anything?

Don’t leave us languishing in worry and fear, please!

Association of Detainees & The Missing in Sednaya Prison

Friends of the Douma4 &