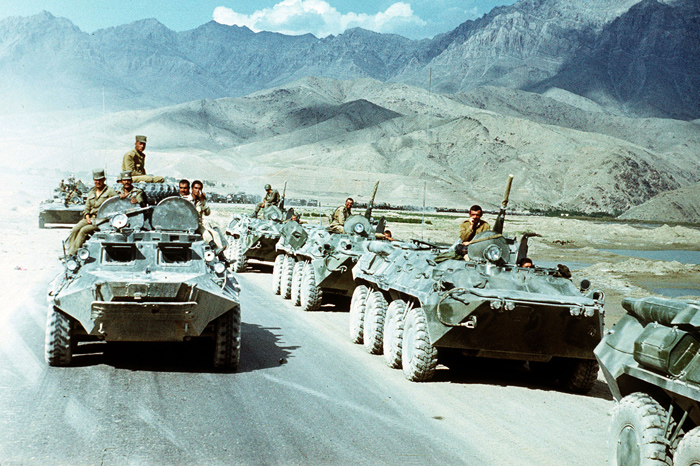 From Herat to Homs, the Western left’s decades-long zeal for Russian bombs

Enthusiasm on the left for Vladimir Putin’s bombing campaign in Syria has strong echoes of the Soviet invasion and occupation of Afghanistan that killed and displaced millions, including relatives of this author.

In March 1980, the Sunday Times published an article on events in Kabul titled, “Tricks and terror in the KGB’s Afghan duel.” Its author, Anthony Mascarenhas, a well-known journalist famous for his investigative work on the genocide in Bangladesh in 1971 by Pakistani forces, was the only Western reporter in the Afghan capital when the Soviets invaded the country on Christmas Day, 1979, and began their almost ten-year-long occupation, which was, as the headline described very well, mainly dominated by tricks and terror.

While many of today’s analyses still focus on the Islamic insurgency, the Mujahideen, that was fueled during that time and has dominated Afghan politics to this day, the crimes of Kabul’s Communist regime and its allies in Moscow often seem to be almost forgotten. Nevertheless, a discussion of this issue is not just necessary because of all the Afghans who lost their lives during this period, but also because of new conflicts in the world and the framings and discussions that have evolved thereof.

Perhaps the best example of such a conflict is the war in Syria, which in fact has many similarities to 1980s Afghanistan. In Syria, a brutal dictatorship has ruled the country for decades, attacking, imprisoning and murdering literally all political opponents. According to all credible human rights observers, the Assad regime and its key Russian ally are responsible for the vast majority of killed Syrian civilians, who now number around 500,000 human beings by conservative estimates.

On the other side, there are different Syrian rebel groups, including militant and extremist ones. Some of these groups enjoy, or previously enjoyed, support from foreign states such as the United States, Turkey, Qatar, or Saudi Arabia. In fact, this is nothing new, and has always been a natural attribute of many insurgencies throughout history. As in Afghanistan, many global players are involved in the war in general.

It is also well-known that many Syrian rebels have committed gross human rights violations. Nevertheless, just letting the numbers speak, these are incomparable to those of the Assad regime and its accomplices, which should be no surprise given that Assad’s military and that of his allies are using airpower, while no rebel group enjoys remotely similar resources.

During the Soviet occupation of Afghanistan, the situation was not much different. While the Soviet air force regularly wiped out whole villages, the Mujahideen had nothing like as much firepower, and were forced to engage in classic guerilla warfare. According to a 1986 UN report, 33,000 Afghan civilians were killed between January and September 1985 alone, the vast majority at the hands of the Soviet army and its allies in Kabul. The report’s author stated that insurgents killed hundreds of civilians too, but that this was not comparable with the Soviet violence that killed tens of thousands. He also pointed out that the Communist regime in Kabul and its backers in Moscow had a deliberate strategy of mass killing and torturing civilians.

Who could fail to be put in mind of the Assad regime while reading such an analysis? Some people believe the Americans invented the “War on Terror” narrative after 9/11. However, reading the propaganda booklets printed by Moscow-backed Afghan Communists reveals otherwise. “Defenders of Islam? No, terrorists!” said one of them seen by this author, published by Mahmood Baryalay, a prominent regime propagandist, in 1982. The regime routinely described the whole Afghan opposition who stood up against them as “terrorists.” Afghans who resisted the regime’s brutality were totally dehumanized, often described as “imperialist proxies” who want to destroy Afghanistan.

This was even noticed by the Politburo in Moscow that observed events in Kabul with some unease before the occupation began. For example, as former senior KGB archivist Vasili Mitrokhin noted, the Politburo was not happy seeing Nur Muhammad Taraki, the self-styled “Great Leader of the Revolution” who became both President and Prime Minister after the Communists’ bloody coup in 1978, rampaging in Kabul. Taraki considered more than 300,000 traditional mullahs as an obstacle to “the progressive movement of the homeland.” He tortured and shot many religious leaders—or buried them alive. He also gave orders for members of the Muslim Brotherhood and other groups to be immediately killed whenever they were found. Ideologically, Taraki was a strong believer in the Red Terror that occurred in the aftermath of the Bolshevik Revolution. “Lenin taught us to be merciless towards the enemies of the revolution, and millions of people had to be eliminated in order to secure the victory of the October Revolution,” Taraki, the “Great Teacher” as he was called by the followers of his dictator-like cult, once said to a stunned Alexander Puzanov, then the Soviet ambassador to Afghanistan.

Surprisingly, we read less about figures like Taraki in Western leftist analyses of Afghanistan. It appears as if they have not even existed. Instead, the focus lies on the bearded Mujahideen, the savage enemies of miniskirts and alcohol. Often, it seems that as long as brutal regimes guarantee these two things, all the crimes, torture in dark dungeons and the mass murder in rural villages become irrelevant.

This, too, has obvious similarities to the present debate on Syria, where many on the left do not just support a brutal and murderous regime, but evince clear Islamophobia and racism. For a sizeable number of journalists, bloggers, activists, and intellectuals, it is still easier to identify themselves with a regime that is killing its own people but claims to be “anti-imperialist,” “socialist,” or “secular” than with anything that brands itself as “Islamic.” For that reason, many Western leftists who welcomed the Soviet invasion of Afghanistan justify it up to the present day (while they pretend to be against the ongoing US occupation of the country). They continue to speak about the Mujahideen, al-Qaeda, and the CIA, but do not like to mention the tens of thousands of innocent people who disappeared in the torture chambers of the Communist government in Kabul. In many cases, families still don’t know what happened to their relatives all these decades later.

The American-Irish journalist and leftist icon Alexander Cockburn once said the following about Afghanistan: “We all have to go one day, but pray God let it not be over Afghanistan. An unspeakable country filled with unspeakable people, sheepshaggers and smugglers, who have furnished in their leisure hours some of the worst arts and crafts ever to penetrate the occidental world. I yield to none in my sympathy to those prostrate beneath the Russian jackboot, but if ever a country deserved rape it’s Afghanistan. Nothing but mountains filled with barbarous ethnics with views as medieval as their muskets, and unspeakably cruel too.”

In fact, the Soviets really did “rape” Afghanistan as Cockburn desired. During the almost decade-long occupation, around two million Afghans were murdered while millions more, including many of my own family members, became refugees all around the world. Generations of Afghans have been destroyed, and in terms of radicalization, many young people did not join militant groups because the CIA told them to do so but because they witnessed horrific massacres and lost their loved ones. Almost four decades on from the Soviet invasion, this simple truth continues to elude the Western left.

Emran Feroz is a journalist and author based in Germany, and the founder of Drone Memorial, a website that lists the victims of drone strikes. He tweets @Emran_Feroz.