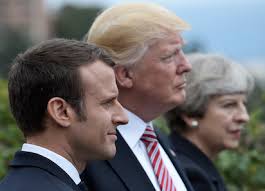 The coalition that could have been

There was a real opportunity after last month’s chemical atrocity to amass a powerful international coalition against Assad, Russia, and Iran—an opportunity the West squandered, argues James Snell.

Foreign policy undertaken unilaterally is disdained and feared. It meets vast, instinctive criticism. Action, especially military action, which is seen to be arbitrary elicits the same response. When democratic states seek to act on the international stage, they desire not only to succeed in their chosen course of action, but also to be seen to be acting justly, within limits, and without caprice.

When, last month, the forces of France, the United Kingdom and the United States struck three locations associated with the chemical weapons program of the regime of Bashar al-Assad, much was made of the limited nature of this action. Only three sites were bombed; they were strictly related to the regime’s chemical weapons program and not its wider war machine; and there were no human casualties, for nor were any intended.

The allies broadcast the limits of their action, action that was intended to be punitive. Their aim was to seem proportionate and precise, their hope self-justification. Further justification was to be found in the appearance of multilateralism. The allies first tried—in the full knowledge of inevitable failure—to receive warrant to act from the United Nations Security Council.

It is useful to assess the co-operation of Britain, France, and the United States and what it does and does not mean. The alliance suggested, as was intended, a willingness among the three to act against chemical crimes, though in strictly limited terms. The allies took limited action militarily; and despite the theater at the United Nations, they made limited attempts to build a coalition of nations opposed to the Assad regime which could give moral force to, and conduct, operations that would sincerely affect the regime’s ability to commit comparable crimes.

All this must have made sense to those driving the allies’ policy. They intended justified strikes to represent some, but not give a warrant for more, action. Officials limited the extent to which allied action could be increased, and thus made meaningful. This was the intention of all parties.

The allies had time, between the Douma chemical attack and the retributive strikes, in which to build a grand coalition.

It began when President Trump tweeted a forceful condemnation of the man he called “Animal Assad” and the regime’s Russian and Iranian backers. This tweet received immense international attention. World leaders who were not explicitly aligned with Assad know what he is and what his regime does. In private, officials from every country saw this truth reflected in the American president’s strident language.

This language was supported with activity. The United States and France began openly talking about military options. An American carrier group was dispatched to the eastern Mediterranean. American drones began moving more obviously, circling above the sea.

Leaders from across the world, anticipating US and allied action, signalled their assent in advance. This was not simply born of a recognition of what was to come. It was a reaction to knowledge of the regime’s true nature and demonstrated a genuine desire for its crimes to be punished, in a way which would restrain the regime’s capacity to do more and worse.

There was even the suggestion that other nations were willing to be involved in action against Assad directly. The Qatari emir, meeting with Donald Trump, stressed that Assad could not be tolerated. Qatari officials put it about that their country could strike the regime. The Saudis built upon this as a basis for rhetorical competition. Muhammad bin Salman, the Saudi Crown Prince, directly said his country could take punitive action against Assad.

Israel not only condemned the regime and threatened a response; it took its own action before the allies did, using the situation to hit a pre-selected, personal target: the T-4 air base occupied by Iran. Israel’s generals later said that, if the Iranians retaliated, Israel’s first response would be to overthrow the Assad regime.

It is notable that countries whose relations are extremely poor—for example the Saudi-United Arab Emirates alliance and Qatar, amid a bitter crisis—were all in favor of action. To suggest that the two camps could have been brought together by striking Assad would be too much; but that each signalled willingness to join the Americans in rhetorical opposition to the regime means something. And now, as the dust settles, it signifies a path not taken.

In handling the strikes on the regime as they did, France, the United States, and Britain failed to build a broader global coalition against Assad. This coalition would have been sincerely positive. Not only could it have united disparate countries against a barbarous regime. It would also have intimidated the regime and overawed the support it receives from Iran and Russia.

Serious action against the regime would have involved not only a more extensive attack on military bases, political symbols, and components of its chemical weapons program; it would have drawn in an assortment of nations willing to face the regime down rhetorically and diplomatically, changing the nature of a civil conflict in which foreign support overwhelmingly benefits one side, which has no incentive to halt its worst excesses or to try for peace. The creation of a coalition ranged against the regime could have forced it to take diplomacy more seriously, ultimately pushing the war towards a peaceful conclusion.

But the allies were not serious and did not take serious action. Instead, the United States, France, and Britain decided to act alone and in a reduced manner, destroying three empty sites and failing to do anything more.

This is bitter enough. But it is made worse by something else. The allies noticed they received international praise for their actions. Either they misattributed the cause (perhaps believing it was their restraint that merited praise) or wondered how best to exploit this goodwill. Later suggestions from the Americans—especially that an ‘Arab force’ might be used to replace American troops in northern Syria—epitomize the latter reaction, and have drawn deserved ire.

In all the derision of this plan, something else must be said. American attempts to shift its burdens onto other backs cannot provide a unifying moment—which is exactly what concerted action against Assad, undertaken by a varied coalition, would have done. That is the coalition the allies could have built, which now looks as distant and as unreal as any past hope that the barbaric character of the Syrian war may have been changed for the better.