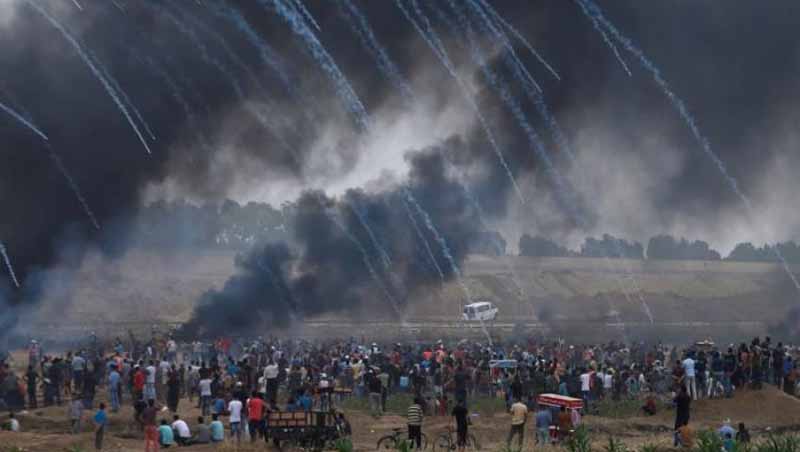 It’s impossible on any day, but especially a day like this year’s Nakba Day, to ignore the inherent bond between the Palestinian and Syrian causes.

[Editor’s note: This article was originally published in Arabic on 15 May, 2018]

On the day commemorating the founding of Israel and the Palestinian Nakba (“Catastrophe”), the opening ceremony of the United States’ new Israeli embassy was held in occupied Jerusalem, in a spectacle that condensed seven decades’ worth of aggression unrelenting since 1948, comprising daily-renewed contempt for justice, and a consecration of the exception represented by Israel, with its internationally-guaranteed “right” to expropriate land and violate the charters its own protectors took part in creating.

On the same day, the Israeli occupation army confirmed that its right to kill Palestinians also remains guaranteed, for it showed no hesitation in perpetrating a horrifying massacre at the Gaza Strip frontier, killing at least 58 and wounding over 2,000. The victims of the massacre were the same victims of Israel’s founding, or their children, or grandchildren. Those living in the giant prison that is the Gaza Strip weren’t born in that prison by chance, but rather because the great powers that won the Second World War permitted the establishment of Israel seventy years ago, and have done nothing since except issue resolutions and protect Israel’s ability to violate the same. In any case, the matter of international legitimacy here appears a mere triviality, for it grants Palestinians the right of return, and denies them everything that might compel Israel to respect that right, and indeed permits Israel to kill them if they try to exercise that right by crossing its border in the direction of their homes.

What the Palestinians of Gaza did, and do, may seem futile from the perspective of searching for tangible and direct positive results, and perhaps it is in one aspect a service to the hegemony of Hamas over Gaza, and even to Iran and the Assad regime. The root of the issue, however, lies elsewhere. That argument would be an ethically void one, for more than fifty Palestinians did not die in yesterday’s marches for Iran’s sake, or Hamas’ sake, but rather because they are under siege; besieged by Israel and “international legitimacy” behind it. It would also be a politically void one, because it’s unreasonable to ask a people to surrender to a situation of utmost misery; seemingly pointing to the darkest of futures without end; solely because resisting that situation might serve someone else. This is not a politically rational demand—indeed it is a demand antagonistic to politics itself.

And, in any case, it’s incorrect that what the Palestinians did yesterday at the Gaza frontier was of no use, because if it were, Israel would not have killed more than fifty of them for doing it, and nor would the occupation authorities have handled the event with such anxiety. Palestinians live encircled in the West Bank, and have their land and destiny taken from them every day; and they live in the 1948 territories as second-class citizens; and they live under siege in Gaza in dreadful conditions; and in the rest of the world as refugees deprived of rights; all the many years of political negotiations having achieved nothing for them. What could such circumstances possibly lead to other than resistance in all available forms? What could such circumstances be other than an unceasing fount of violence and wars?

The Israeli army’s Arabic-language spokesperson, Avichay Adraee, described the Gaza procession as “obscene”, and here we cannot but recall the Syrian interior minister in 2011, when he told a Damascus crowd, “For shame, guys… what you’re doing is a demonstration!” Most of Adraee’s phrases in one of the videos he posted on Facebook corresponded more or less to those of the Syrian regime about the protests that broke out in 2011; the familiar talk of vandals, and terrorists, breaking the law, placing civilians at risk of death and hiding behind them.

It is impossible to ignore the resemblance between the situation of Palestinians and that of Syrians from the areas that rebelled against Assad’s rule, for it is “international legitimacy” that guaranteed the latter’s killing throughout the last seven years, and was the midwife that supervised the birth of their disaster, which involved every type of violation of international legitimacy itself, from indiscriminate bombardment of residential areas to forced displacement to killing by torture to mass murder with chemical weapons. Likewise, it involved forms of exploiting regional and international states in the struggle against those violations, in a narrow, opportunistic fashion, as well as a decline of the political and military leadership of this struggle, in a manner that allowed many to arrive at condemnations of the Syrian revolution, often before and without condemning the regime.

There is a regional and international situation that pushes the direction of the Syrian and Palestinian causes toward two mutually incompatible positions, of which the latest Israeli strikes on Iranian targets in Syria appears to be a condensation. The “pragmatic” justification for this is two-fold. In its “anti-imperialist” form, it says that “every bullet fired at Israel is good, even if it comes from Satan himself,” thereby justifying draping support for Syria’s butchering regime in a kufiya. In its “anti-anti-imperialist” form, it says that tying the Syrian cause to the Palestinian question involves a nihilism that can only be a result of the remnants of a Baathist upbringing, of which we have not been “liberated” yet, and other such pseudo-intellectual gibberish.

One could, and often does, speak for a long time about the active role of Palestinian organizations in supporting the Assad regime, and the hypocrisy and falsity of the global “anti-imperialism” that has no problem using the slogans of Palestine at the same time as supporting such killers as Assad. The criticism of this discourse must continue, but what cannot happen is that attacking it and denouncing its hypocrisy becomes a starting point (and a fixed point) of thinking about the Palestinian cause, for an excess of such animosity, especially if paired with a sense of betrayal, is the ideal way to transform into a mirror image of the other; that is, to mimic their behavior, with different colors. In Syria, we have, in the criminal conduct of the Islamist factions, a fine example of how Assad’s violence propagates miniatures of itself in others.

It is not possible to speak, in today’s intensely intermixed and intertwined world, even of separate humanitarian causes that might be able to ignore one another. What, then, of a cause that is not only stuck to our own, and of which we don’t only have local copies in every one of their details, but also overlaps extensively with ours; in geographic, human, and value terms; in a way that doesn’t permit us to imagine any perspective of Syria without a clear Palestinian dimension, nor one of Palestine that could conceivably demand the Syrian cause to be silent, or to keep away from it, to any extent.

Syrians and Palestinians are slaughtered today under the cover of the continuous, eternal “exception,” and it’s no surprise that Israel should equal the Assad regime in its obsession with the idea of “eternity.” This “exception” is invigorated thanks to a terrible international situation, which besieges us and prevents us from practicing our humanity; from being normal; from living our political life outside the cage of the fascist concepts of treason and patriotism; from being diverse, and disputing, and being divided, and haggling, and reconciling; from being people, in short. It’s an exception that cannot be cajoled pragmatically, and to which no local resistance is possible. What, anyway, is the meaning of a conversation about “the local” between Gaza and Yarmouk, or between the Syrian refugee camps and the Palestinian refugee camps, in Lebanon, or Jordan, or in Syria itself?

An end to the exceptional occupation of our lives and our deaths, and for us not to be disposable… that isn’t very much, and it isn’t a slogan.

Yassin Swehat
Alex Rowell Alex is a Beirut-based writer, translator, and managing editor of Al-Jumhuriya English. His first book, 'Vintage Humour: The Islamic Wine Poetry of Abu Nuwas', is due to be published by C. Hurst & Co. in November 2017. He tweets @alexjrowell.