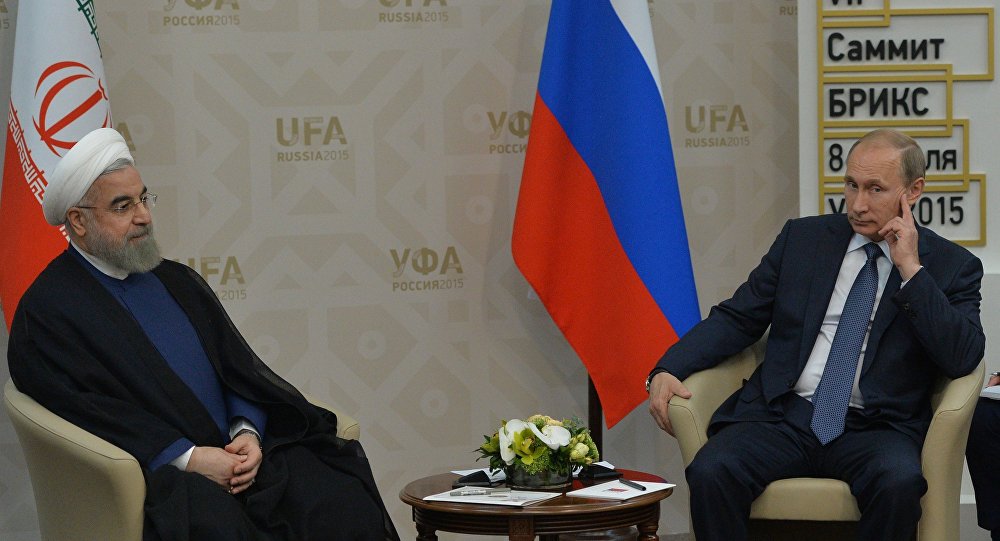 Russia hints it will press Iran to leave Syria, in line with recently renewed Israeli and American demands. But serious doubts remain as to whether a forced Iranian withdrawal is even possible, let alone likely.

[Editor’s note: This article was originally published in Arabic on 18 May, 2018]

The latest Astana conference; officially the International Meeting on Syria; which wrapped up last Tuesday, received little interest. This wasn’t only because its chief function, namely its sponsorship of the “de-escalation zones” memorandum, has ceased to be operative, after the regime’s takeover of the supposedly de-escalated regions of Eastern Ghouta and Eastern Qalamoun, and parts of Southern Damascus and Northern Homs Province, followed by the forced displacement of large numbers of these areas’ residents. It was also because the balance between the three main parties to the conference—Iran, Russia, and Turkey—has been shaken up in recent days, after the United States’ exit from the Iran nuclear deal, and the extensive Israeli strikes on Iranian military sites in Syria. The Iranians’ margins of manoeuvre have narrowed, and one more mistake could mean a war.

At the end of Astana, the Russian delegation said the next round would be held in Sochi, and would focus more on the political track. The statement is not surprising, for the military purpose of Astana has ended, after Russia and the Syrian regime were able, by consecutive massacres, to take over Eastern Ghouta and displace a large number of its residents, and then do the same to their counterparts in Eastern Qalamoun, South Damascus, and North Homs Province, for whom the chemical attack on Douma was fresh in their minds. No one in Syria wants to test the firmness of international responses after everything that has happened.

While news continues from Homs Province about the entry of regime forces and allied militias into the towns, and their acts of looting after the Russians had promised to rectify the situation there, we hear Bashar al-Assad’s statements from Sochi, to which he paid a “working” visit on Thursday to meet President Vladimir Putin, about returning to the political track. The Russians, then, promise to press the regime once again toward the Geneva process, and to send a delegation of experts to start work on the constitutional revisions prepared by the team of UN Special Envoy Staffan de Mistura.

It appears, however, that Russia’s promises include more than that, for Moscow wishes to convey a message that Assad today is their private puppet, and that as he’s incapable of telling Iranian Supreme Leader Ali Khamenei that he is “not his toy,” as the Israeli Defense Minister called on him to do in a tweet last Sunday, Putin will take care of the task. But the question posed by a reading of these Russian hints and statements is whether Moscow is truly able to keep its promise; that is, can it handle matters in Syria in isolation from Iran? And will the latter be happy to leave Syria so straightforwardly?

To answer the question requires measuring the extent of Iran’s capabilities in Syria today, which are large enough for its departure to be something outside the capacity of any force that doesn’t wish to enter into a new war in Syria. Yet more important than that is Tehran’s strategy in Syria, for the latest Israeli strikes—the largest on Syrian soil since the 1973 October War, and the first of their kind in directly targeting a wide range of Iranian military sites—demonstrated that Iran’s military deployment across Syria is exposed to the Israeli air force, which possesses the initiative and the ability to destroy it within a short time period, just as the supply lines and operations bases that Iran was determined to manage directly in numerous vital points, stretching from southern Aleppo to Damascus International Airport, cannot be kept safe from strikes that would disable them entirely in the event of a widespread war, or even a limited one. This makes them unhelpful amid the new arrangements based on the end of the opposition’s military presence in central Syria, and its confinement to Daraa Province in the south and Idlib Province in the north, which weakens the possibility of threatening any vital areas such as the capital, even if it doesn’t eliminate it altogether in light of the precarious regional situation in recent weeks.

In this context, the Iranian strategy has limited horizons, which may push the Revolutionary Guard and the regime in Tehran to change it over the course of several phases, one of which could involve reliance on Hezbollah and other militias to safeguard the local gains in some of the vital areas in Syria, in the event of withdrawal from those bases. If this is a genuine prospect for Tehran under the current pressures surrounding its Syrian presence, it would be a large gift to Moscow, as the latter would become the strongest power in the country without entering into a struggle with Tehran. In truth, such a scenario would put it in Iran’s interest to make way further for Moscow to take the front seat, in view of its status as the most significant force in Syria, but rational calculations of this kind need not, of course, apply in reality, as experience has taught us well.

After all, the Revolutionary Guard, which celebrates its control over four Arab capitals, may reason that its retreat from one of them could pave the path for its exit from others. In Baghdad, supporters of the Sa’iroon coalition led by Muqtada al-Sadr that won the recent parliamentary elections notably chanted against Iran at rallies, and an Iranian retreat from Damascus could breathe further life into this current, which would make Tehran’s determination to cement its presence in Syria stronger than ever, for it would not wish to appear defeated, especially after the Israelis’ humiliating strikes. In this eventuality, the aforementioned Russian promises would be no better than their promises to the people of Northern Homs Province about regime forces not entering the area.

Putin seeks to invest in Iran’s anxiety after Washington’s withdrawal from the nuclear deal, but he is unlikely by himself to have the ability to expel Iran against its will, even nominally. Moreover, the American and Israeli responses to his hints may either increase or decrease his keenness on the idea.

At present, Putin appears comfortable, with Brent crude prices passing the $80 mark yesterday, and his spokesperson stating that Assad came to Sochi on a working trip, without describing it as an official visit. It was an announcement of a Russian delegate’s visit to his president in his Sochi headquarters, where the delegate was responsive, and ready to provide the formalities required by the diplomatic process in order to obtain international legitimacy once again.