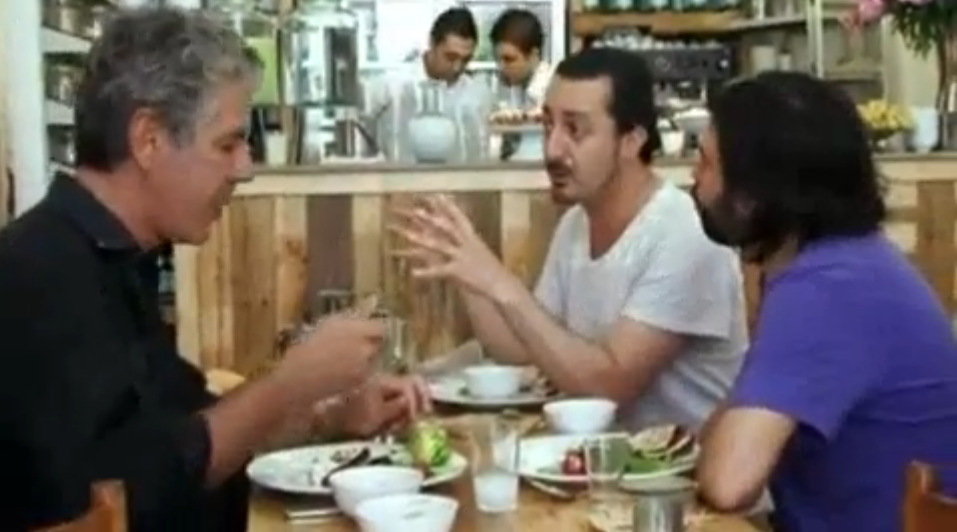 Beirut and the making of Anthony Bourdain

Seeing Beirut slide into war in 2006 transformed the late TV presenter, moving him to humanize peoples—in the Middle East and beyond—whose voices were rarely heard in the US mainstream.

BEIRUT, Lebanon – It was sheer coincidence that the day before Anthony Bourdain died, he interrupted my afternoon. I was careening through one of those freelance work days desperate for direction and destined to go off course. My revelation for the day: I should take up food writing to supplement the earnings from my journalism career. That idea led me to an episode of Parts Unknown shot in Beirut, where I have lived, on and off, for the better part of the past five and a half years.

At the time it was filmed, in 2015, Bourdain was not a Beirut novice. He first visited in 2006. Two days after he arrived, war broke out between Israel and Hezbollah, and Bourdain and his crew had to be evacuated by U.S. Marines to Cyprus. The experience shook him. He was relieved to get out, but he also knew he was one of the fortunate ones with mobility and not so intimate of a connection to what was happening. “It’s easy to forget that,” he said at the end of the 2006 episode, “and then you look at the faces and you ask what memories or things or people are they leaving behind.”

“I came away […] determined to make television differently than I had before,” Bourdain later wrote. “The days of happy horseshit—the uplifting sum-up at the end of every show, the reflex inclusion of a food scene in every act—that ended right there.”

In other words: Beirut was the spark behind Bourdain’s evolution from everybody’s favorite bad boy chef and adventurer into the unconventional, deeply empathetic, no-bullshit moral voice in the American media whose loss so many are now mourning.

In 2006, it started quickly. There was something elementally seductive about Beirut—pheromonic, as Bourdain put it. Two days was enough to be infatuated. Then the bombs began to fall.

Leaving via military transport felt shameful and heartbreaking. It left Bourdain confused and angry, and he didn’t quite understand why. He had gotten a glimpse—and a taste—of a place that pulled him in, and then he was plunged, unprepared, into the heart of its complexity and tragedy.

In 2010, Bourdain returned to try to grapple with the incompleteness of his first visit. He wanted to get it right, which at that point meant making the episode he had intended to do in 2006. The result is a bit incongruous: A light-hearted travel show set against the intense background of his first experience. He hadn’t quite opened his lens yet to the exploration of the social and political forces infused in food cultures that would become the hallmark of his later work.

By 2015, Bourdain’s television home had moved from the Travel Channel to CNN, which gave him the space to complete the transition away from “happy horseshit.” The third—and now sadly final—Beirut episode is framed around the city’s “magnificent and maddening” contradictions. It’s a compelling theme for TV audiences. The contrasts in Beirut are truly mind-bending for the uninitiated. The city is “seemingly the world in miniature,” as Bourdain describes it in the episode. But for anyone who has spent time in Beirut, the “contradictions” are a bit of a tired cliché that can easily veer into head-scarf-and-bikini reductionism.

After a brief stop for fried chicken with a group of Lebanese Harley Davidson riders, Bourdain jumps right into the dangling questions from 2006, crisscrossing the city. There’s a trip to the originally Palestinian and now mixed Burj al-Barajneh refugee camp; a meal at a relaxed, family restaurant on the corniche next to the sea; drinks at an open mic hip-hop night in east Beirut; a family dinner in the Hezbollah-dominated southern suburbs; a plat-du-jour experience at a bohemian Syrian café; and a drunken crescendo at a communist-themed bar in west Beirut.

The fear of conflict spilling across the borders from Syria or Israel looms large in the episode. And in between sequences, there are video montages cutting between Beirut’s contradictory worlds that sometimes indulge in the clichés. The music in the background is intense and, at times, manic. But what stuck out to me most is how much room Bourdain made for the voices of the people he met; how unfiltered they were.

The Syrian-Palestinian man guiding Bourdain around Burj al-Barajneh takes him through the misery of the camp and the problems Syrians face in Lebanon. “We have no area in the world. We have no place in this universe. We belong to nowhere,” the man concludes. “Nowhere.”

There’s no neat bow. No clean summation or justification of why this is the way things are. The audience is introduced to an individual who is almost never seen, brought ever so slightly into his life, allowed to hear his perspectives, and then left to sit with the unacceptable irresolution of his circumstances. It’s a remarkable moment, especially in that it takes place on American television.

Many of Bourdain’s interactions in the episode follow this pattern. There’s a wide-open lens where people are able to speak to their own experiences. Bourdain mostly asks questions and listens. The conversations take place over meals, but food is solidly in the background.

“I used to believe that the dinner table was the great leveler,” Bourdain said in the closing monologue of the 2006 show, “where people from opposite sides of the world could always sit down and talk and eat and drink and, if not solve all the world’s problems, at least find, for a time, common ground. Now, I’m not so sure.”

In the 2015 episode, Bourdain seems to be exploring this philosophical understanding of sharing a meal as a way into other people’s lives and towards common ground, and his shaken faith in it, rather than food itself. It’s a long way from his happy-go-lucky culinary adventures.

The climactic moment of the episode comes when Bourdain sits down for a meal with Lebanese feminist, author, and activist Joumana Haddad. Early on in the program, Bourdain confesses: “I love it here. In spite of everything, I love it here.”

Like many visitors, he’s enthralled by the seemingly impossible diversity, the extroverted indulgence of life, the sense of teetering on the edge of chaos and the fact that, somehow, it all seems to hold together. It’s a potent and intoxicating mixture. But Haddad pushes back. “Don’t you think that the main reason behind you seeing this as a thrilling, exciting place to live in is that you’re a visitor?” she asks.

Bourdain is visibly wrestling with himself in the shot. “Am I wrong to love this place?” he finally asks. The question becomes the central, unresolved pillar of the episode, which also illustrates what made Bourdain stand out among his peers in the American media.

In an era of narrow lenses and often blinding self-assuredness, Bourdain embraced complexity and had the humility to admit he didn’t have all the answers. In an era when public discourse in the United States is dominated by conmen and partisans and laced with fear and disinterest in the outside world, he embraced people and places beyond the borders and was unafraid to expose his audiences to perspectives outside the American mainstream.

Did Bourdain get everything right in his final Beirut episode? No. And he knew it. He never said that he had the conclusive take. He wanted people to sit with the unanswered questions and have them spark enough curiosity that they would go out and explore them on their own. His closing lines about Beirut embodied this spirit. “Everybody should come here,” he said. “Everybody should see how complicated, how deeply troubled and yet, at the same time, how beautiful and awesome the world can be.”

Bourdain, the authentic, witty, deeply moral, empathetic, bad-boy adventurer, existed well before he ever set foot in Lebanon. But it’s hard to imagine Parts Unknown coming into existence and being the show it was without the experience Bourdain had in Beirut in 2006. And without the show, it’s hard to imagine Bourdain the chef being able to break out of the food world so decisively to become a public intellectual and voice of moral authority at a time when the United States is so clearly adrift. In a way, then, Beirut gave us Bourdain—or at least helped unleash his voice that will now be so deeply missed. For that, we should all be thankful to this deeply troubled, yet somehow intensely beautiful city.

Eric Reidy is an investigative journalist based in Beirut. He tweets @Eric_Reidy.