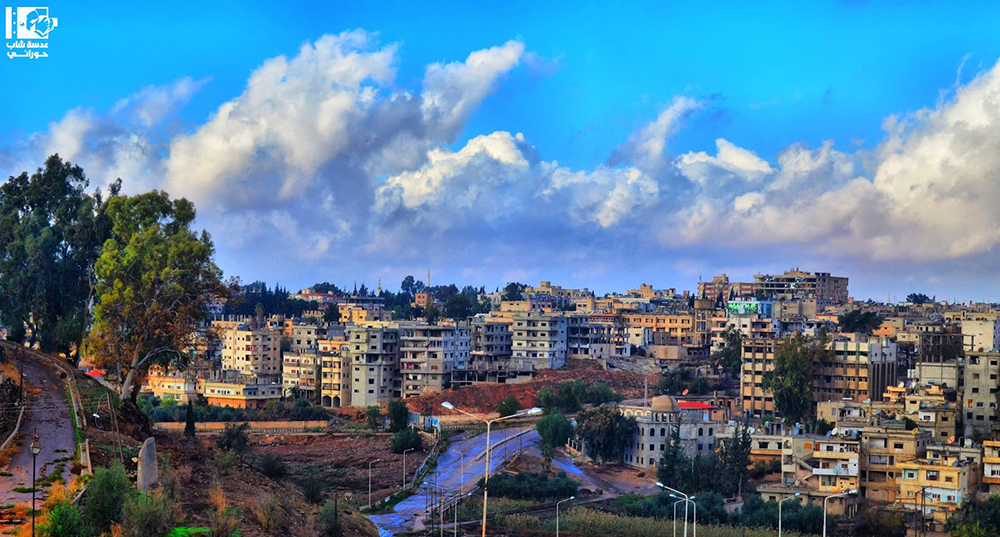 Despite a US green light for Russia and the regime to bomb at will in Daraa Province, rebels have thus far refused to surrender after several bloody days of Russian air strikes, regime barrel bombs, and yet more waves of civilian displacement.

[Editor’s note: This article was originally published in Arabic on 25 June, 2018]

Russian fighter jets commenced military operations in southern Syria’s Daraa Province Saturday evening, carrying out a series of air strikes on the city of Busr al-Harir in the eastern countryside of the province, heralding a new phase of escalation initiated by the Bashar al-Assad regime in the area last Tuesday. On Monday, the regime began pounding the city of Daraa itself with barrel bombs, the first use of the infamously indiscriminate weapons against the city in over a year. At the same time, armed opposition factions in Daraa published a message sent to them by the United States, which said they should not expect any American military intervention in their favor (this despite an official State Department statement on Thursday warning Assad and Russia of “serious repercussions” if they continued to attack Daraa), and that they would have to choose how to face the regime’s offensive by themselves.

As always with the closed doors behind which the fate of Syrians are decided, the content of the discussions pertaining to southern Syria remains unknown, but there are certain fundamental elements that will have to be taken into account in any such negotiations. The first is the Israeli and American demand that no Iranian or Iranian-controlled forces be present near the occupied Syrian Golan Heights, and that Iran’s presence in Syria in general be eliminated. The second is Jordan’s interests, which are at odds with the occurrence of any extensive battles or massacres on its borders in a way that could threaten Jordan’s security. The third is the fate of the Naseeb border crossing between Syria and Jordan, and the need (from the regime’s perspective) to re-open it for commercial traffic, which in effect means the need to take it out of opposition hands, or to find alternatives to it—such as through Suwayda Province, for example—which in turn would require the regime to take control of the Lajat area adjacent to Suwayda, northeast of Daraa Province. The fourth is the continuing Islamic State (ISIS) presence in Hawdh al-Yarmouk, southwest of Daraa; as well as in the northern Suwayda desert; which may be used by the various sides to pressure one another. Finally, the fifth pertains to the policy of the regime (and, behind it, Russia), which continues to center on the premise that the regime retaking every region of the country, whether by military means or by so-called “reconciliations,” is an immutable and non-negotiable strategy, with no relation to any political or diplomatic processes.

In this context, the Russians’ entry into the Daraa battle, and the American backpedal from its rhetorical bluster, may be explained by Israel and the United States obtaining guarantees about the lack of a direct Iranian presence in the battle, and Jordan in its turn receiving assurances that the fighting will not affect the Hashemite Kingdom’s security. It may further be explained by the fact opposition factions have thus far refused to hand over the Naseeb crossing to the regime, as they have also refused to enter into “reconciliations” on the terms desired by the regime.

Despite previous reports of a withdrawal of Iranian-backed militias from their positions in Daraa Province, it is by no means confirmed that Iran is outside the present battle, as Israel had stipulated. What is confirmed is that Russia prefers to enter the battle alongside the regime army and its militias in the main; this can be inferred from the overall behavior of Moscow and Damascus in recent days in Daraa’s neighboring Suwayda Province, which appears aimed at embroiling Suwayda’s Druze-majority population alongside the regime in the battle.

In Suwayda Province there are thousands wanted for regime military service, with some estimates putting their number as high as 40,000. There are reports of Russian pressure on the region’s Rijal al-Karama (“Men of Dignity”) movement and the notables in the Suwayda community aimed at compelling Rijal al-Karama to abstain from hindering regime operations launched from Suwayda Province, after a force affiliated with the movement prevented a regime convoy from gathering in the village of al-Mazraa last week. Russia is said moreover to want them to abstain from protecting those wanted for military service. Reports speak of Russian delegates threatening to regard the Rijal al-Karama movement as a terrorist organization, which appears to be what prompted the movement to issue a statement in which it refused to involve the people of Suwayda in the battle, and pledged to defend the mountain, affirming a stance of neutrality in the battle.

As for the stance of the opposition factions in southern Syria, it appears so far they reject the “reconciliation” terms presented to them, as indicated by the announcement Sunday of the establishment of a central operations room incorporating all the factions of Daraa and Qunaitra, and the affirmation within the announcement of the determination of the factions to confront the regime’s attacks, and their desire to wage a battle to the end.

In the field, artillery and rocket bombardment of the areas in Daraa’s northeast continues uninterrupted, particularly in Lajat, as do Russian airstrikes in numerous regions, most prominently Busr al-Harir, where regime dominance—if attained— would lead to the isolation of Lajat from the rest of Daraa’s eastern countryside. Land and air bombardment has also reached the town of al-Maseeka and the village of Jadal, as well as all the villages of Lajat, in addition to Busr al-Harir, al-Musayfira, al-Hirak, al-Karak al-Sharqi, al-Ghariya al-Gharbiya, al-Na’ima, and al-Sura. Areas in Suwayda countryside have also faced limited bombardment, with Katyusha rockets falling on the city of Suwayda itself, without causing casualties.

As for territorial developments, regime forces succeeded in advancing along numerous axes in Lajat, announcing their takeover of the village of Jadal in the process, only for the opposition to declare its recapture Sunday evening. Clashes of varying intensity remain ongoing on several fronts in northeast Daraa Province, in addition to fighting and exchanges of shelling in parts of Daraa City itself, which is divided between opposition and regime control.

The Lajat front, from which regime forces chose to begin their attempts to advance, is considered the most difficult of Daraa’s fronts, on account of the severe ruggedness and rocky nature of its terrain, which is filled with caves, and its location adjacent to Suwayda on one side and to the Damascus countryside on another. Perhaps it’s this that pushed regime forces to start from it, since in the event they’re able to take it over, it would mark a great moral blow to the opposition in the south, and a victory for the regime in securing the roads between Damascus and Suwayda, and on to the Jordanian border.

The ongoing military escalation has led to the killing of over twenty-eight civilians thus far, and the wounding of dozens more, in addition to the internal displacement of tens of thousands fleeing to the south and west of Daraa Province, especially areas near the Jordanian border, to the extent that some villages and towns have become almost entirely deserted, most notably Lajat, Busr al-Harir, and al-Hirak. This is in addition to the displacement of numerousf residents of the villages of Suwayda close to the frontlines, including the village of Sama al-Hunaydat, now completely emptied of its residents.

The continuation of the bombing and the battles raises the prospect of a new humanitarian catastrophe unfolding in Syria, the features of which have already begun to appear in the dire humanitarian situation of those displaced from the above areas. The regime’s continued mobilization of its forces on numerous fronts, including the so-called “triangle of death” northwest of Daraa, indicates the possibility of expanding the geographical scope of the confrontation, which diplomatic efforts are still said to be looking to contain. Should these efforts fail, it could mean the people of Daraa are in store for bloody days, given the clear readiness of the regime and the Russians to commit further massacres and large-scale killings.