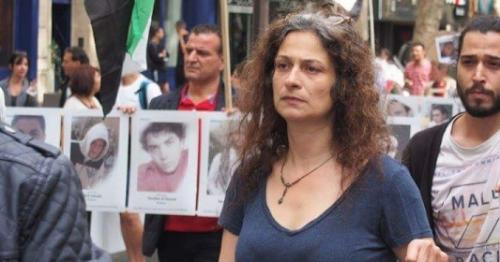 A farewell to May Scaff

Despite the enormous professional and personal price she paid for it—including arrest by Assad’s infamous security agencies—the celebrated 49-year-old actress never wavered in her support for Syria’s revolutionaries.

[Editor’s note: This article was originally published in Arabic on 24 July, 2018]

On Monday morning, the 49-year-old Syrian artist May Scaff passed away in the French capital, Paris, where she had settled after a lengthy journey following her departure from Syria in 2013. The news was met with shock on Syrian social media, where tributes poured out for the artist and freedom activist who left before her time, demonstrating the great impact left behind by Scaff and her presence in Syrians’ memory, both through her acting and her courageous stances in support of the Syrian revolution from its first moments; stances that placed her on a collision course with loyalists of the Bashar al-Assad regime, and its security agencies, which not only arrested her after she took part in an anti-regime demonstration in the capital, Damascus, but also put her on travel ban lists and sent her repeated threats.

Scaff began her acting career on the university stage while studying French literature at Damascus University. After playing numerous roles on the stage of the French Cultural Center, she took part in several cinema works, the first of which was Sahil al-Jihat (“The Whinnying of the Provinces”), directed by Maher Kado. From the cinema she then went to the small screen, becoming one of the most prominent faces of Syrian television drama.

This TV career began in 1992, with the Jarima fi al-Dhakira (“A Crime in the Memory”) series adapted from an Agatha Christie novel. While its viewership was modest, Scaff’s screen presence sufficed to announce the arrival of an actress who would occupy an important place in Syrian drama. Scaff was then destined to be etched into Syrians’ memory by her playing of leading roles with great deftness, perhaps the most prominent of which were the character of Tima bint al-Mundhir, the prettiest woman of the village of Ush al-Yamam in the 1996 series, al-Ababid; and the character of the young rebellious Aleppine woman in the second part of the Khan al-Harir (“The Silk Market”) series in 1998; followed by many other roles, including the mythological Zarqa al-Yamama character in 2006.

In 2004, Scaff opened the Teatro Institute in Damascus, which marked a wholly new experiment for Syrian performing arts, driving many youths and amateurs to enter a world previously monopolized by the official school (The Higher Institute for Dramatic Arts). From a small auditorium on Shahbandar St, the Institute moved to a historic Arabic house in the Qanawat district, giving space for the development of a promising and unprecedented project. Scaff, and this Teatro project of hers, would face repeated harassment from the regime’s security agencies, which compelled her to close it temporarily on several occasions, until it was shut down permanently by the agencies at the outbreak of the revolution.

From the moment she first saw the demonstrations in Daraa in 2011, Scaff was unhesitant in declaring full solidarity with the movement that met with severe repression at the regime’s hands. She participated in a statement that called for breaking the siege of Daraa’s city and towns, issued by artists and intellectuals at the end of April 2011, dubbed the “Milk Statement” for its demand that children’s milk and other foodstuffs be allowed into the besieged areas. This statement, and those who signed it, faced a ferocious campaign from regime loyalists, and a counterattack within the drama world itself, led by the director Najdat Ismail Anzour, that brought Syria’s largest drama production companies together in a boycott of all the signatories of the statement and others like it. The period saw memorable clashes between Scaff and the pro-regime Palestinian businessman Yasser Qashlaq in front of journalists, after the latter described the Egyptian revolution of January 2011 as a “coup;” and with Najdat Anzour himself, whom Scaff told contemptuously that she had “left the profession to him.”

Scaff was arrested while participating in a demonstration in Damascus’ al-Maydan neighborhood in July 2011. After her release, she experienced nearly two full further years of harassment and pursuit, not to mention the professional blacklisting, crowned by a second arrest in May 2013, after which she decided to leave Syria for Jordan’s Amman, and then France.

Scaff’s political stances were distinguished by firmness and moral clarity at all times, as is plainly evident in a short film made shortly before her departure from Damascus, in which she speaks about the revolution, and the savagery of the Assad regime and its style of rule, and the cruelty of what was in effect her forced displacement from her country and home city.

Scaff’s passing coincided with announcements of numerous deaths of Syrians in the Assad regime’s prisons. On the very day of her parting, for example, it was revealed that two well-known peaceful opposition activists from Darayya, the brothers Yahya and Maan Sharabji, had been tortured to death in regime custody. Her tragic demise in exile evokes all the sorrows and pains lived by Syrians for the mere act of asking for justice, freedom, and dignity. May Scaff symbolizes us, and our country.

This is Al-Jumhuriya’s salute to the artist, activist, and revolutionary, for whom death did not tarry.