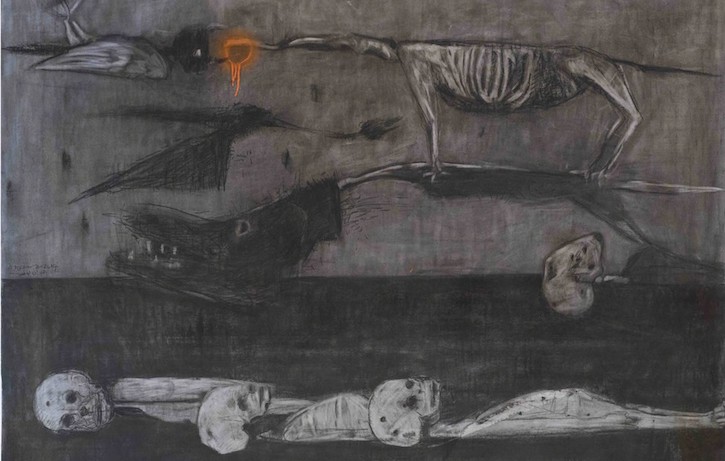 The world at the fascist moment

In his foreword to Theo Horesh’s new book, The Holocausts We All Deny, Yassin al-Haj Saleh decries the present “lack of a global vision or project” capable of resisting the crisis of democracy from China through the Middle East to Trump’s America.

[Editor’s note: The below is the foreword to a new book, The Holocausts We All Deny: Collective Trauma in the World Today, by Theo Horesh. The foreword was also published in Arabic on 1 August, 2018]

Genocide is rare, or that is what we tend to believe. We think we can tally the number since the beginning of the twentieth century: if not four—the ones in Turkey, Germany, Cambodia, and Rwanda—then ten or twenty. The major accomplishment of this book is to show that genocide marks our world today, and that mass murder is plentiful, whether we deny it or not. The history of genocides is at once a history of their denial, a dynamic process which has kept them relevant to us, and prevented time from rendering them obsolete. The Palestinian nakba, for instance, did not happen seventy years ago; it continues to take place into the present and beyond. The Armenian genocide is current today for the descendants of those massacred a century ago because it has not been recognized. Only the Holocaust has gained constant recognition in Germany.

If despite that it does not become irrelevant, that is because it has undergone a functional transformation, having become a foundation for what Zygmunt Bauman called “hereditary victimhood,” which in turn is the basis of a state that ties its legitimacy and security to the illegitimacy and insecurity of Palestinians, by subjecting them to a cold, long-term genocide. In a similar vein, should the rehabilitation of the Assad dynasty’s regime in Syria continue, the slaughter ongoing for the last seven years will remain a constant companion to the six million Syrians forced to flee their country, with even more displaced internally, and to all the rest, including those Syrians who are pro-regime.

Horesh writes, “Cultures inordinately shaped by collective trauma tend to live in the past.” In any case, the Assadist protectorate, which has preserved its rule by placing itself under the protection of Russia, Iran, and their acolytes, has a genocidal slogan: al-Asad aw la ahad! (It’s Assad or no one!). The regime is happiest, in other words, when it imagines itself remaining in power ila al-abad (forever), as another Assad slogan says more frankly. This is a call for a permanent war against the future, and the slaughter of those who aspire to change. This form of “the politics of eternity,” an expression I borrow from Timothy Snyder, gets support from Eternal Russia and its leader Vladimir Putin, radical in his animosity towards democratic change. It has been naturalized by China, which amended its constitution so that Xi Jinping may remain in power for life. And it makes for a world suitable for violent nihilistic groups in our region, where nihilism takes an Islamic face (maybe in protest to Allah’s defeat) and who aspire to impose their own particular version of the eternal, of a never-ending end of time.

I do not talk about Syria because I happen to come from this country afflicted with one of the most brutal ruling juntas in the world today, nor because Syria is under multiple occupations while Syrians themselves are scattered around the world. Rather, I speak of Syria because the Syrian genocide is met by a state of global denial, where the left, the right, and the mainstream all compete with one another to avert their eyes and formulate cultural discourses, genocidal themselves, to help them see and feel nothing.

In this “fascist moment,” to use Theo’s expression, the global order is showing increasing signs of failure. Meanwhile, the oligarchy that has appointed itself guardian over international law and security is the source of the most brutal actions in the world, particularly those of Putin’s Russia, which is behaving like an out-of-control gangster in Georgia, Ukraine, and Syria, while the other global powers see cause for little more than a sterile show of irritation. It is reminiscent of Europe’s retreat in the face of Hitler eighty years ago, and might even be worse, given that America today has its own Putin, who is also admired by the rising right-wing tide in Europe, as well as large portions of the left.

Perhaps we are living on the threshold of a major collapse like the Second World War, and can do nothing but be astonished by the shortsightedness and the drop in moral and political standards of the ruling elites of Western liberal democracies, stuck in struggles and wars of the past, helplessly unable to change themselves in a changing world: foreigners are suspicious, refugees are greedy, poor people are dangerous, Arabs are unreliable, Muslims are the enemy, Africans are lazy, and so on. All of them must stay under surveillance, and cannot enjoy freedom. The fundamental danger, however, comes from somewhere else: the powerful and their clients.

Democracy is in crisis because of the attack of post-industrial capitalism, in its neoliberal version, on the social functions of the state, and the rise of identity politics associated with it. The media, along with postmodern and post-truth ideologues, volunteer their services in spreading awareness of differences in identity and culture over every social echelon, with the goal of distracting people from social inequality. This mix of neoliberalism and identity politics, based on discriminating between people and covering up inequality behind cultural differences, is what lay behind the outbreak of the Syrian revolution in the spring of 2011. It is something you will never discover from the Western media, nor lethargic and clueless leftists, themselves opposed to democracy, who prefer remembrance over knowing present-day reality, as befits all Salafis, even if these ones have ceased their jihad against imperialism, to which they insist on subordinating our struggle.

With every passing day, democracy loses its criterion as a project compatible with spreading social justice globally, the way the peoples of Europe and the West achieved their rights, freedoms, and a minimum level of social protection. Today, this West, which does not know how to be humble, is not only causing harm to others but also to itself, because it cannot get out of the hierarchy of nations, cultures, “civilizations,” and religions, set up by none other than itself. This hierarchy is rigid and firmly entrenched, and has no name other than racism.

Refugees and immigrants find themselves at the intersection of identity politics, the erosion of the state’s social functions, and the lack of a global vision or project. The crisis of democracy and social justice embodied by this expanding internal Third World, inside many Western countries, finds its genocidal complement in the internal First World of Syria and other similar countries. It is represented by the fascist in a necktie: Bashar al-Assad, with the facade of his elegant wife, once called “a rose in the desert” by Vogue magazine, before the start of the revolution and the shame of the Assadist killing season caused the report to be removed. The Syrian Lady Macbeth, imported from Britain for the then “young president,” with her “Western cultural upbringing,” prefers to have her clothes and shoes also imported from the most prestigious Western outlets, just like her husband’s expensive cameras. This in a country where 37 percent of the inhabitants lived under the poverty line in 2007 and 80 percent today, where the Arab world’s richest man, Rami Makhlouf, just “happens” to be Assad’s maternal cousin.

One of the biggest transfers of property in Syria’s modern history is now taking place, including that of its land for the benefit of foreigners and powerful locals, made possible by the biggest population transfer since its founding at the end of the First World War. This transformation has a well-known name in historiography: settler-colonialism, where an entire people is replaced, and ownership transferred to the colonizing powers, the incoming settlers, and the natives who win their favor. This too will not be found in the media. One might find talk of the “regime change” that imperialism wanted in Syria, which ascribes the aborted struggle of the Syrians to forces of global domination that wanted precisely not to change the regime, and especially not to touch its security infrastructure, to use the words of Hillary Clinton. One will not find anything about the “people change” carried out so that the protectorate may remain forever, under the eyes and ears of imperialism, and with its approval.

In his book, Theo takes us to Palestine, Iraq, and the genocide of the Yazidis at the hands of ISIS, to Lebanon, Yemen, Burma, and Nigeria. He does not limit himself to looking at genocides of varying degrees occurring here and there, but also alerts us to the dangers of the annihilation of life itself manifested in climate change, which has been denied by the current American administration, the country carrying the greatest responsibility for it. Alongside this denial, America is also currently showing streaks of racism unprecedented since the civil rights movement half a century ago. In his recent book, Is Racism an Environmental Threat?, Ghassan Hage looks at the connection between racism in its predominant form, Islamophobia, and environmental issues, providing us with Mr. Trump as a fine example of this correlation.

Today’s world contains within it severely traumatizing experiences on a broad scale. The unaddressed and unrecognized traumas not only draw people to the past, as Theo says. They also drive them to retreat deep inside themselves, to isolate themselves from others, or give themselves the right to savagely attack others, with the excuse that they themselves are victims of injustice. I know this from personal and collective experience, and cannot avoid thinking of the danger of how thinking about trauma can itself be traumatizing, or how social life and meeting others, that is association and society, become injurious and painful. What do we do when isolating oneself in a faraway desert, or the top of a towering mountain, or a remote forest is increasingly impossible on a planet populated by over seven billion? And if non-isolation generates the severest pain, and politics, with the state—its tried-and-tested apparatus—an armed force of mass trauma, whose heads display a mix of brutality, avarice, and pettiness? We are on the verge of entering an age where thinking (“a dialogue with the self” according to Hannah Arendt) is of no help, nor is meeting and dialoguing with others in overcoming our traumas or even coping with them. Since we are then filled with rage and it is only a matter of time before we explode. We are faced with the inescapable danger of an annihilation greater than any other: the killing of all human beings and perhaps the destruction of life itself, not at the hands of ideological extremists or out of bitter political conflicts this time, but rather because of pettiness, selfishness, and denial.

The time to resist the fascist moment is now, and this book is both an ethical document and a call to action. It clearly says the world is united, and needs to be analyzed and dealt with as a single unit if we are to aspire towards a less cruel world. It also says that “methodological nationalism” is an intellectual, political, and moral danger, and that solidarity is no longer enough. It is becoming more and more a relationship of power that soothes the conscience of those doing the solidarity at a cheap cost when they themselves lack nothing. What we truly need is partnership, to meet and to engage in dialogue, to think and work together for the one world which we inhabit together.