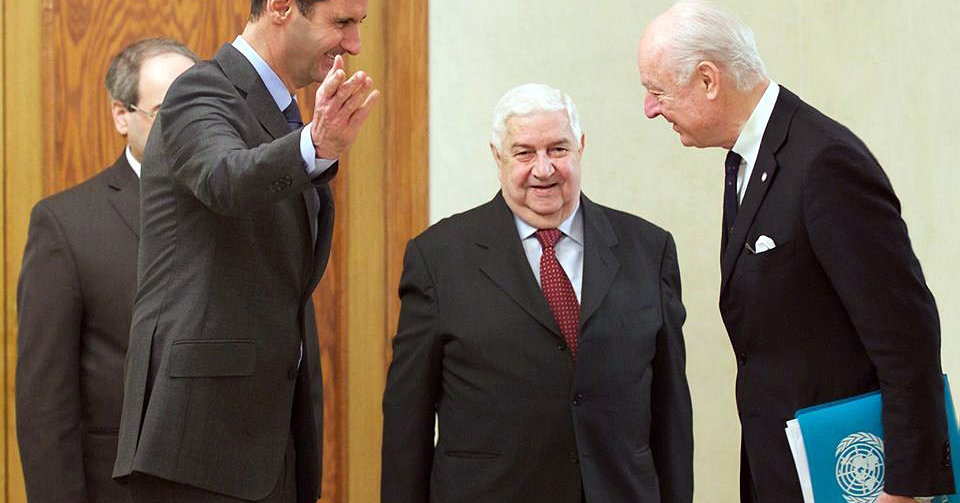 Open letter: If the UN can’t stop Assad’s crimes, it needs to change

In an open letter to the United Nations, over 100 prominent writers, academics, and activists say the time has come to consider radical reform of the U.N. Security Council, given its abject failure to protect Syrians from the Bashar al-Assad regime’s mass violence.

[Editor’s note: The below is an open letter to the United Nations, signed by over 100 signatories, concerning the present situation in Syria, and implications for the future of the international community, as represented by the United Nations, and especially its Security Council. In addition to being published here by Al-Jumhuriya, the letter has been sent directly to over a dozen senior U.N. officials, listed at the end of the text below.]

In 2000, Secretary General Kofi Annan submitted a report to the United Nations, We the Peoples: The Role of the United Nations in the Twenty-First Century. Paragraphs 215-219 took up what he called the “dilemma of intervention,” characterized in terms of a conflict between the defense of humanity and the defense of sovereignty. Acknowledging that states are often the “principal perpetrators against the very citizens that humanitarian law requires them to protect” (para. 210), he stated that the Security Council had a “moral duty to act on behalf of the international community” and that “surely no legal principle—even sovereignty—can ever shield crimes against humanity” (para. 219).

This dilemma has not been resolved, and events in Syria have made clear that the attempt to forge an international consensus concerning the responsibility of states to protect the human rights of their own citizens has stalled, and quite possibly failed.  This situation must change. The failures we see in Syria are failures of our international community; as the representative body for the international community, the U.N. bears responsibility for the failure to halt the Assad regime’s brutal campaign of terror against Syrians. While we appreciate Secretary General António Guterres’ recent remarks about the need to protect the 3.5 million people now in and around Idlib, the past seven years provide no basis for optimism on this score.

Events in Syria have resulted in paralysis at the highest levels of the U.N., sending a message—and not for the first time—that sovereign impunity and self-interest can apparently trump all other considerations when a country or one of its allies has veto power at the Security Council; even mass murder on a genocidal scale will not necessarily be stopped. This message is contrary to the purposes and principles expressed in the U.N. Charter, and is particularly worrisome at a time when the rise of increasingly authoritarian and nationalistic governments threatens to undermine international cooperation, stability, and peace, jeopardizing the work required to deal with global challenges successfully—de-escalation of conflicts; global warming; poverty and economic injustices; to name just a few. The U.N. remains an organization of considerable global power, but ineffectual moral outrage coupled with a continual and childish game of tu quoque at the Security Council only underscores how questionable the efficacy of this institution has become when a sovereign state violates the human rights of its own people. What has happened in Syria over the past seven years is consequently of enormous global significance. It reveals that even the most clearly and exhaustively documented chronicles of a government’s abuses are no guarantee that a vulnerable and brutalized population can make a successful claim for protection under international law, and it reveals that the member states of the U.N., particularly those on the Security Council,  are apparently incapable of acting in concert when action is most needed.  Whatever diplomatic and other efforts have been made to halt the slaughter, whatever condemnations of the Assad government and its allies have been issued, they are of no apparent help to the people of Idlib, who are now under profound threat.  We urge you to do everything in your power to prevent another human and humanitarian tragedy in Syria, and by doing so, to renew your institution’s commitment to global cooperation and an ethics of partnership.

At any point over the past seven years, the government of Syria could have decided to take appropriate and effective steps to protect its population against genocide, war crimes, ethnic cleansing, and crimes against humanity, in keeping with the political commitment it made when it signed onto the document issuing out of the 2005 World Summit, which specifically relied on the notion of the “Responsibility to protect” (R2P). This document makes clear that sovereignty is not only a right to be asserted in the face of outside interference, but also a responsibility owed by the government of a sovereign nation to protect, ensure, and advance the well-being of its entire population. Similarly, the Draft Articles on Responsibility of States for Internationally Wrongful Acts submitted to the United Nations General Assembly in 2001 acknowledge a general law of state responsibility within international law, which is relevant in profound cases of state abuse of its own citizens, as has occurred over the past seven years in Syria.  It would seem that Assad has bested your institution, in the sense that its high principles have so far proven no match for the regime’s impunity.

The Assad government has utterly failed to meet any reasonable criteria of responsibility regarding the civilian population of Syria. With its decision to respond to peaceful, nonviolent protests with increasing force and violence, this regime signaled to the entire world that it had no intention of adhering to any international humanitarian norms with respect to the treatment of people residing within its borders; instead of being protected and treated with dignity, Syrian citizens were regarded as chattel—to be murdered, abused, terrorized, debased, and exploited as the regime wished. According to recent figures provided by OCHA, 13.1 million Syrians are in need of humanitarian assistance, 5.6 million have fled the country, and 6.1 million people have been internally displaced. The World Food Program provides assistance to 3 million people inside Syria and to 1.5 million Syrian refugees outside the country. Many thousands have died under torture in the regime’s prisons, and the whereabouts of tens of thousands more remain unknown to anyone outside the regime itself. And while the U.N. stopped tracking figures on the number of Syrian civilians killed in the conflict in 2014, U.N. Special Envoy Staffan de Mistura estimated in 2016 that at least as many as 400,000 had died, which is likely a low estimate.

The Assad government is responsible for over 90% of the documented civilian deaths within Syria since 2011. All perpetrators of war crimes in Syria should be held accountable for their actions, but it is important to underscore the responsibility of the regime for the overwhelming number of violations that have occurred since nonviolent protests began in 2011—behavior in keeping with a comprehensive, consistent, and longstanding pattern of citizen abuse that began under Hafez al-Assad and was institutionally as well as informally enshrined within the entire Syrian state, from the most modest village school to the grimmest cells of Tadmor and Saydnaya. It has been exhaustively documented that acts prohibited under international law have become routine practice in Syria, including widespread torture and death in prisons; forced disappearances; deliberate targeting of medical personnel and facilities; starvation sieges; forcible displacement of civilians; and systemic rape. Chemical weapons have been used against civilians on numerous occasions, with the OPCW-UN JIM finding the regime directly responsible for the attack in Khan Shaykhun. The Independent International Commission of Inquiry on the Syrian Arab Republic has determined that the Assad government used banned chemical weapons on at least 33 occasions. And although Syria and its ally Iran are not a party to the Convention on Prohibitions or Restrictions on the Use of Certain Conventional Weapons, its ally Russia is; the use of so-called “barrel bombs” and other incendiary weapons in heavily-populated areas against civilians and medical personnel has resulted in profound death and destruction, and their use should be investigated under international law.

Again, the past seven years have shown that the U.N. has so far proven institutionally incapable of putting a stop to the violence. Its legitimacy has been tarnished, and the Assad state has been free to act against Syrians as it wishes, without restraint. The fact that reconstruction projects are now being discussed indicates that future business opportunities and commercial deals outrank the human rights of Syrians, which were anyways never of any real consequence to the regime. If those human rights remain of any consequence to the international community as a whole, as represented by the U.N., then the U.N. must either act immediately to protect and secure them, however belatedly, or admit that the institution is at a crossroads and begin a process of comprehensive reform, particularly with respect to the power accorded to the Security Council. The current status quo is intolerable, and must be changed, for the good of Syrians and indeed, for the good of everyone in this world of ours.

There is no indication, absolutely none whatsoever, that the regime and its allies will suddenly start to exercise restraint on the use of violence with regard to the civilian population residing in Idlib.  The regime does not combat “terror;” it unleashes it.  You, as employees of the representative body of the global community, must act to prevent what many reasonably fear will be a horrific slaughter. That is your job.

*affiliations are for identification purposes only

Anne Eveleth, Anti-War Committees in Solidarity with the Struggles for Self-Determination (AWCs)

Ziad Majed, Associate Professor at the American University of Paris

Franck Mermier, Professor and Senior Researcher at the CNRS, France

David Turpin Jr., Anti-War Committees in Solidarity with the Struggles for Self-Determination (AWCs)

via the Spokesman for the Secretary General Stéphane Dujarric:

via Office of the United Nations High Commissioner for Human Rights (OHCHR):

via United Nations Office for the Coordination of Humanitarian Affairs (OCHA):

via United Nations Office of Counter-Terrorism:

-Christopher Gunness, Spokesperson, Director of Advocacy and Strategic Communications, United Nations Relief and Works Agency for Palestine Refugees in the Near East (UNRWA)