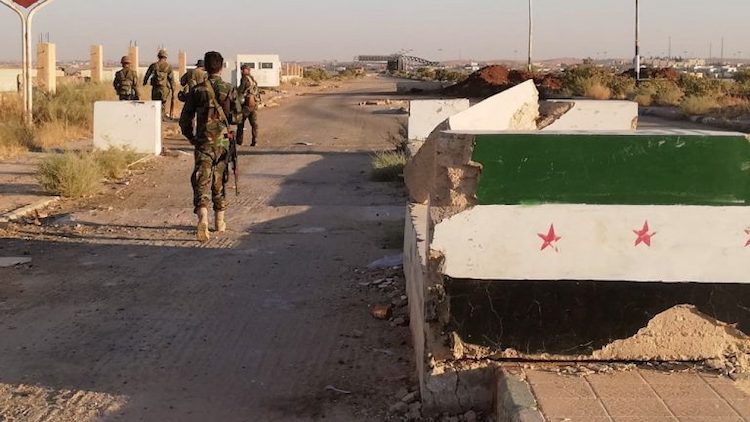 “Reconciling” with the regime: A deadly game

Russia told south Syria’s rebel commanders it would protect them if they agreed to “reconcile” with the regime last summer. Dozens have since been killed or arrested.

After the Assad regime and its allies recaptured the south Syrian province of Daraa from opposition hands last summer, large numbers of rebel fighters and civilian activists chose to enter into so-called “reconciliation” agreements with their victorious foes. These agreements involved military surrender in exchange for the right to remain in their hometowns, as opposed to being relocated to the northern region of Idlib, as thousands of fighters in other parts of Syria had previously been obliged to do. Crucially, their safety was to be guaranteed by Russia, the regime patron whose fighter jets had just spent weeks pounding their province to rubble. Despite the obvious risks, the majority did indeed accept the offer to “reconcile.” Today, half a year later, many have paid dearly for that decision.

The regime has taken various forms of action against them, ranging from assassinations of senior rebel commanders to arrests of leading opposition figures to the distribution of lists of thousands of names wanted for military service to regime checkpoints and search points. The latter sparked protests, the most recent of which took place just last Tuesday, calling on the Russians to uphold their agreed pledges.

Whether the opposition brigade leaderships and local community dignitaries who helped arrange these “reconciliations” and encouraged people to stay in place knew it would end up this way cannot be said. For the ordinary fighters and civilians, it was largely their loss of trust (and that of their tribal elders) in these very same leaders that led them to remain, after the disastrous military campaign exposed the falsehood of the assurances obtained from the brigades’ regional and international backers.

In addition, there were explicit Russian assurances that the brigade leaderships would not be punished in the event of “reconciliation,” and would be allowed to retain authority within their territory. Family and tribal elders were given similar promises about the protection of their relatives, who were in effect the backbone of the local brigades that took up arms against Assad. These pledges led to a majority opinion that it was necessary to accept the settlement offered, which indeed most brigade commanders and local dignitaries did. Only a small minority rejected them and opted to head north. These notably included many from the towns of al-Hirak and Busr al-Harir, both of which met with fierce Russian bombardment in consequence.

Once the settlements were reached, the erstwhile opposition brigades were absorbed into various pro-regime military entities, ostensibly so as to guarantee protection for the areas and families they represented, and to preserve some of their power and prerogatives. Thus the brigades of western Daraa Province went to the so-called Fourth Division and Military Security formations, while their counterparts in the east were absorbed by the Russia-linked Fifth Corps. Iran, too, was given a slice of the pie, taking on a limited number of fighters within its own militias.

Yet the regime had no intention of allowing these brigades’ commanders to maintain their authority and influence, knowing well their ability to turn things around in the event that political and military circumstances changed. The return of certain forms of popular oppositional activity, such as demonstrations and the writing of slogans on the walls, can only have heightened the regime’s anxieties. (It was, of course, in Daraa that the arrest of schoolchildren for scrawling such graffiti formed one of the earliest sparks of the Syrian uprising in 2011.) Accordingly, as soon as the “reconciliations” were agreed, the regime began going after the very people who made them possible.

Over the course of the last half-year, the regime has arrested dozens of “reconciled” brigade commanders, especially those unaffiliated with any military or security entity after the deals were reached. In the city of Inkhil in northern Daraa Province, for example, senior figures such as Amjad al-Nasir, head of the Free Syrian Army’s Salah al-Din Brigade, and Ziad al-Nasir, deputy commander of the 111 Brigade, were arrested by the regime’s Air Force Intelligence in October. Not that those who did join ranks with regime-affiliated factions were spared. Yasir al-Rashdan, the former head of the Hawran Mujahideen’s special operations brigade, was arrested by Military Security despite his working with the pro-regime Tiger militia. Sulayman al-Qaddah, a leader of the Fallujat Hawran Brigade who had joined Military Security after clearing his status, was likewise arrested. Khalid al-Hariri, the head of the opposition Military Council in Busr al-Harir and the spokesperson of the Amud Hawran Division, who began working directly under Russian command after “reconciling,” was similarly arrested in Homs Governorate, reportedly for smuggling persons wanted by the regime to Hama Province. Mustafa al-Kasm, the head of the Khalid ibn al-Walid Brigade in Daraa City, who had joined the regime’s Military Security ranks, was arrested by the Fourth Division, and later released after Russian mediation. Nor were arrests limited to military figures, with Muhammad Ahmad Sharif, a civil affairs judge at the Dar al-Adl (“House of Justice”) court of Hawran, being arrested along with other judges in spite of their personal statuses supposedly having been “settled.”

Above and beyond arrests, there have also been numerous assassinations of former military commanders, the parties responsible invariably being officially unknown. Though a minority of these killings were potentially carried out by opposition affiliates, the circumstances of most of them indicate regime responsibility. Ghanem Jamous, head of the Free Syrian Army-linked police force in Dael, for example, was arrested by Air Force Intelligence during a raid on his home before his corpse was found on the outskirts of the town. Others assassinated include Yusuf al-Hashish, a prominent commander in the Southern Front coalition’s al-Mu’tazz Billah Brigade, who was killed in the town of Muzayrib after joining first the Russian-backed Fifth Corps and then the regime’s Military Security following his “reconciliation.” Another was Mashhur Kanakiri, a commander of the Hawran Mujahideen’s Fourth Brigade, who had been the first “reconciled” brigade leader to appear on pro-regime television channels speaking about “cleansing Dael of militants.” Mansur al-Hariri, a former Fallujat Hawran Brigade leader, and Omar al-Sharif, formerly head of al-Yarmouk Army, were also killed, reportedly by Lebanese Hezbollah members.

The regime aims, with these assassinations and arrests, to strip what remains of southern Syria’s families’ and tribes’ influence, by removing the leaders who represent them in military bodies. Without their commanders, the lower-level fighters of former opposition brigades can be more easily dispersed across a range of fronts within the various regime-linked factions and formations. Despite the extension by six months of the agreed time period by which those wanted for military service must show up—a measure taken to appease popular discontent after the recent demonstrations—what has happened in the past few months illustrates the regime is determined to take its version of “reconciliation” all the way; chipping away at south Syrian society until it’s utterly dispossessed of any power to act on its own.

[Editor’s note: This article was originally published in Arabic on 1 February, 2019]