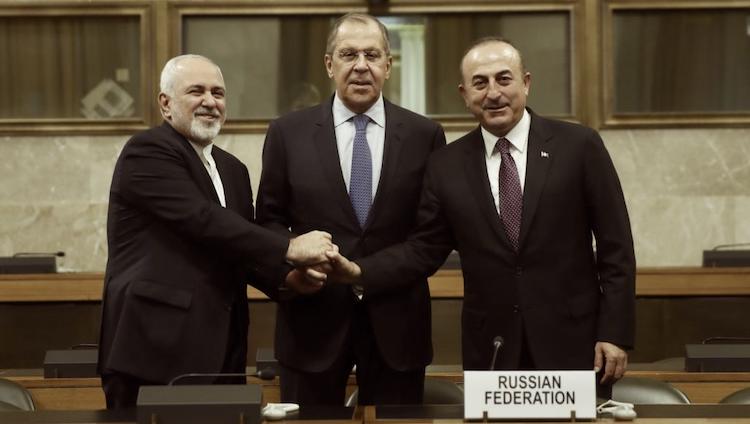 Why are the UN and the Syrian opposition taking part in a sham “constitutional committee” designed to rehabilitate Assad?

In recent days, a leaked list emerged online purporting to name the members of a committee set up with UN backing, and the support of states including Russia, Turkey, and Iran, for the purpose of drafting a new Syrian constitution. Notably, the list included the names of numerous opposition and civil society figures. Which begs the question: why have they agreed to lend their names and reputations to such a dubious endeavor?

During his first years of rule, the late Syrian dictator Hafez al-Assad required a new constitution to help him impose his authority over the state’s executive, legislative, and judiciary authorities. Syria then was a country still containing various centers of power, both inside and outside state institutions. Thus came the constitution of 1973, which combined all authority within the president’s grip, and made the Baath Party—headed by Assad—the “leading party in the society and state” of Syria.

When Hafez died in 2000, his son and successor Bashar required nothing new from the constitution save the amendment of the article setting the president’s minimum age at 40 (it was reduced to 34, Bashar’s age at the time). He was happy to abandon all facets of socialism without needing to amend the constitutional articles mandating a socialist state economy, which was but one of many signs that the constitution had become mere ink on paper, and that all authority lay in the hands of a clique adhering to no constitution of any kind.

With the revolution of 2011, Bashar found himself compelled to change the constitution, but this time not in order to confront internal centers of power, nor to bolster his collapsed legitimacy. The resulting constitutional amendments of 2012 were, in theory, momentous: now Syria was ostensibly to become a politically pluralist state, no longer led by a single party. All references to socialism were erased from the constitution’s articles, replaced by protections for all the freedoms and civil rights established in the constitutions of democratic states. None of this had the slightest effect on the lives of Syrians; neither in terms of their everyday affairs, nor their relationship with the state institutions that ruled them.

Nothing was changed, by the 2012 amendments, in the mechanisms of governmental practice, or in the structure of the ruling regime. This by itself suffices to demonstrate that the constitutional amendment had no internal function, but rather was aimed outside Syria’s borders; its objective being to improve the appearance of the regime in the eyes of the international community, as a step toward eventually saving and reinforcing the regime. There is nothing to suggest any of this has changed today. On the contrary, the Assad regime is going further in its scorn for constitutional and legal texts, including those it established itself. It continues to kill broad sectors of Syrians, and humiliate them, and destroy their lives in its prisons as well as outside them, without any bounds of any kind. This renders talk of constitutional amendments as potential solutions for the Syrian nightmare little more than a sick joke.

The regime, in its style of rule, pays no heed to the articles of the present constitution, which means by default that amending those articles will not lead it to change its style of rule. This self-evident deduction was implicit in the international community’s formation of the Geneva Communiqué of 2012, later adopted by the UN Security Council in Resolution 2254, which stated clearly that “the only sustainable solution to the current crisis in Syria” involved “the establishment of an inclusive transitional governing body with full executive powers,” on which basis “there can be a review of the constitutional order and the legal system […] subject to popular approval.”

Thus, the UN’s declaration of the necessity of creating a transitional governing body, after which it would be possible to move to further measures such as constitutional amendments and elections, is an established gain won by the sacrifices of Syrians, incorporating a clear understanding of the fact that all the constitutions and elections of the world will continue to mean nothing so long as authority lies in the hands of Assad and his security apparatuses. And yet, today, the UN acts contrary to this fact, by marketing progress in the course of the so-called Constitutional Committee as though it were progress in the course of the political solution itself, in a broad-daylight falsification of the Syrian question as a whole.

Joining the UN in this falsification are all the regional and international parties to the Syrian conflict, including those supposed to be allied with the opposition; all of them happy to ignore the precondition of establishing a transitional governing body. These also include opposition forces themselves, as represented by the High Negotiations Committee, which is subject to the dictates of its regional and international backers and allies, and participates in the falsification without feeling the need to even explain its reasons for agreeing to do so.

The regime’s past suffices for one to say that joining it in forming a new constitution, with no serious measures affecting its unlimited ability to kill and subdue Syrians, and without extracting a practical or even rhetorical declaration from it to pursue political transition, is tantamount to helping it rehabilitate itself internationally, whether the opposition’s participants intend that or not.

If there exists alternative information, unbeknown to the public, which suggests different conclusions, then Syrians deserve to know it. If not, then the present political process is in truth one of rehabilitating the regime internationally, not changing it. In which case, why are opposition members taking part in it? Why do they accept to be false witnesses to such a sham? What conceivable gains could be made from it; or, at least, what stops them from not doing it, at a time when it’s clear the military operations of the regime and its allies have no relation to the political process, and are unaffected by it, just as their policy of repressing and terrorizing and killing Syrians by torture is unrelated to and unaffected by that process?

Perhaps Assad and his clique will maintain their hold on the country’s neck for many decades to come, or perhaps they’ll be compelled to depart, or concede part of their power, if they become a burden on their allies. In either case the wording of a new Syrian constitution will play no determining role whatsoever. If anything, it could contribute to producing the former outcome. This is what the facts available to us suggest. Anyone with alternative facts should come forward and explain them.

[Editor’s note: This article was originally published in Arabic on 13 February, 2019]