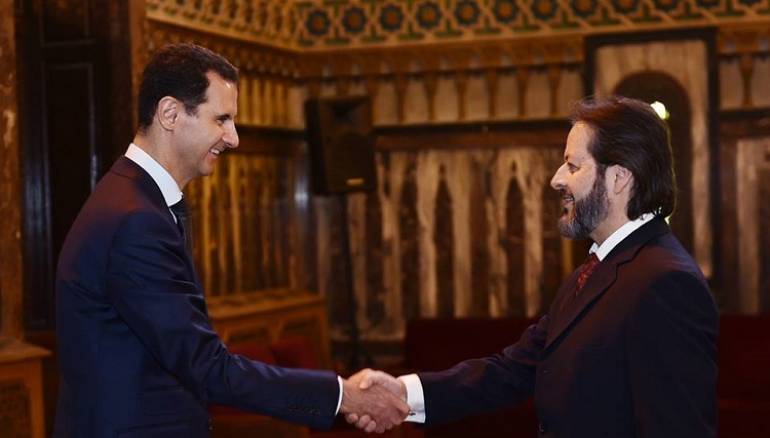 As the costs of Assad’s Pyrrhic “victory” become clearer, even die-hard loyalists are increasingly speaking out about economic and other woes. The regime’s response makes clear it will not tolerate even this highly watered-down form of dissent.

After eight years of popular mobilization and activism against the Syrian regime, the latter has managed to preserve a highly exclusive political system that tolerates no form of dissent and seems, as of today, secure in power with no real internal challenge to its rule. However, during the last few months, the regime has been troubled by a climate of criticism over its inability to provide adequate goods and services, as well as attempts from loyalist forces to push the boundaries of permissible social and political participation.

Continued increases in the prices of basic goods and services, severe electricity and fuel shortages, and extremely high poverty and unemployment rates have left everything subject to criticism in regime-held areas. This criticism usually takes places on social media. Not just ordinary Syrians, but also loyalist celebrities, artists, and journalists have jumped on board, criticizing the government and demanding Bashar al-Assad’s intervention, questioning the official narrative of “victory.”

The regime appears to be growing more anxious about this mounting criticism, launching a counter-attack to discredit it. The speaker of the Syrian parliament, Hammouda Sabbagh, accused detractors of being directed by foreign powers in a campaign to provoke civil strife and divisions. Yet Sabbagh’s words in turn met with widespread reproach on social media. Such disturbing defiance necessitated Assad’s personal intervention.

Accordingly, in his most recent speech, during a meeting with heads of local councils across Syria last month, Assad made a point of lambasting criticisms of his government on social media, leaving no room for doubt that they will not be tolerated. He distinguished between well-intentioned critics who held “sincere emotions” and other provocateurs with “false emotions,” only to conclude that both led ultimately to the same outcome: “social divisions in a time we more than ever need unity of opinion and approach for all major issues.”

In fact, the real concern of the regime isn’t the denunciations of the government per se. The executive branch has always been scapegoated to deflate popular discontent and to put on occasional anti-corruption shows. The real concern is the climate of criticism that has been growing in the country and its consequences. Though this form of “dissent” is apolitical and spontaneous, it is much more widespread and sustained than anything the regime has witnessed among loyalists during the uprising or before it. Moreover, this form of dissent exerts no cost on dissenters and can effectively evade state controls, which leaves the regime—not accustomed to uncontrolled criticism—very anxious and fearful of the prospect of offline action on the ground. That is indeed what happened just four days after Assad’s speech, on 21 February in southern Syria’s Suwayda, where a sit-in in front of the local Baath Party branch was organized to protest the shortage of gas and electricity. This was one reason for the announcement on 9 March of new tough measures by the Deputy Prosecutor General of Information and Communication Crimes to stop the spread of “false and exaggerated news that undermines the prestige of the state,” threatening offenders with between six months and three years in jail, plus monetary fines.

This newly voiced defiance has erupted not only due to deteriorating economic conditions, but also eight years of controlled pro-regime mobilization. Overwhelmed by the growing popular challenge to its rule in 2011, the regime responded not just with direct repression but counter-mobilization as well. It sought to effectively mobilize a certain segment of the population, exploiting and amplifying pre-existing fears of political change in a volatile region and divided society. The regime mobilized young loyalists to lead and participate in pro-regime demonstrations and activities, and formed Popular Committees in loyalist neighborhoods very early in the uprising.

Besides directly mobilizing segments of its base, the regime also allowed greater participation and inclusion of certain groups and elites that had been outside its traditional circle of patronage, in order to help it overcome eroding legitimacy and increasingly weak state presence and performance. The government-organized non-governmental organizations (GONGOs) and new political parties, allowed for the first time in July 2011 following the uprising, have contributed to the new climate of controlled mobilization. This set the stage for new loyalist faces to enter the Syrian parliament and to be included in the country’s highly exclusive system.

This mobilization of the regime’s popular base during the war has fostered a sense of agency among loyalists and encouraged pushing the boundaries of social and political engagement vis-a-vis the regime. This was clear in October with the widespread controversy and opposition to a draft presidential decree regulating the functions of the Ministry of Religious Endowments (Awqaf), which was seen by loyalists as granting the Ministry more powers. Social media campaigns succeeded in forcing certain amendments to the decree, satisfying and empowering those who opposed it.

A sense of entitlement, in other words, has been instilled in loyalist circles, with some affirming they won’t go back to the pre-2011 situation, when their voices were irrelevant. Nabil Saleh, a Syrian MP who first entered parliament in 2016, launched a social media campaign titled the “Alliance of Honest people” to challenge attempts to control the voices of the “patriotic opposition,” of which he considers himself a member. The defiant MP contended that “the war has ended the tutelage over us,” ascribing legitimacy to “the people who send their children to the frontlines” and attacking the National Progressive Front, a pro-regime political alliance of several political parties including the ruling Baath Party.

Saleh’s primary goal seems to be to preserve the right of a “loyal opposition” to criticize and participate politically, claiming that “not allowing opposition voices was one of the main causes of the war.” His vision of “opposition” is evidently a much watered-down one, however, as he himself accused peaceful protesters of being “terrorists” and charged the actual Syrian opposition with treason. This post-war trend strives, then, to be heard and included within a fundamentally exclusionary political system, one in which “the people” are loyalists alone. It seeks inclusion in a parallel process of exclusion, and participation in this exclusion and suppression of the majority of the Syrian people.

And yet the Assad regime remains unwilling to tolerate even this highly diluted form of inclusion. This should be no surprise. Assad has always opted for exercising his power without any restraint, whether in the form of institutions, ideology, or social pressure. In his February speech, Assad made clear that all forms of activism and criticism concerning public issues have no place in his re-emerging state, even if they come from hard-core loyalists. He is determined to regain not only “every inch of Syria,” as he put it in the speech, but also the entirety of the pre-war state of total obedience and unmitigated control.