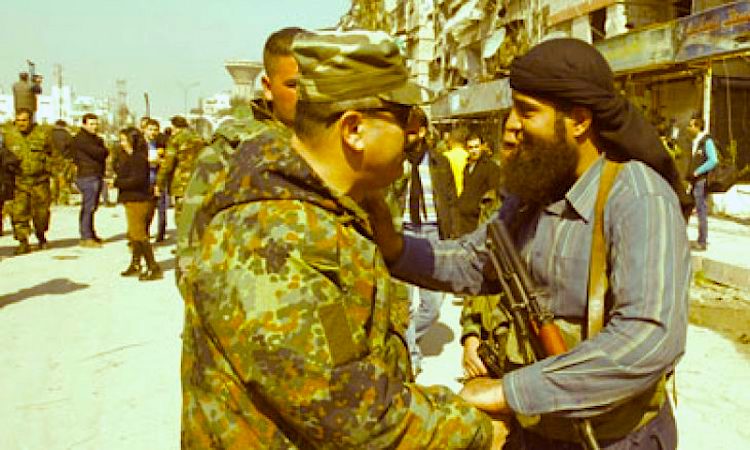 Beaten, humiliated, then sent as cannon fodder to the ISIS frontlines: A former defector recounts his experience of “reconciliation” with the Assad regime, which appears more interested in punishing its defeated opponents than making peace with them.

The term “reconciliation” has become widespread in Syria in recent years, describing a concept promoted by the Assad regime as a means of turning the page on the armed conflict with its opponents. The so-called “reconciliation” arrangements that have thus far been carried out in various locations have typically involved the displacement of residents unwilling to accept them, while those consenting to them remain in place under the rule of the regime. Though the latter are provided nominal guarantees as to their safety, they soon learn the reality the regime has in store for them is markedly different.

The areas that have undergone such “reconciliations”—such as the Damascus suburbs, the Homs countryside, and the south—do not all face identical conditions today. Their situations vary for several reasons, among them the number of people opting to remain in place, and the geographical character of the region in question. What they all have in common, however, is that their young men have been forced into military conscription, and that those wanted by the regime’s security and intelligence apparatuses are shown no mercy or amnesty, whatever “guarantees” may have been offered on paper.

People of both these categories—those wanted for military service, and those pursued by the state—have been obliged to obtain so-called “settlement documents” as part of these “reconciliations;” documents which are supposed to permit them free passage through regime checkpoints without detention. In the case of would-be conscripts, the documents grant them a six-month period in which to either postpone their military service, for education or other approved purposes, or else to join the army upon the termination of the six months. A local source within a “reconciliation” zone told Al-Jumhuriya that “those who voluntarily sign on unprompted after the end of the period are treated better than those arrested for avoiding the draft; for example, they may be sent to safer areas further from the heat of battle.”

As for those wanted by the security agencies, who are mostly defected soldiers, former rebel leaders, and civilian opposition activists previously working in the media or humanitarian fields, “the ‘settlement documents’ are not easily obtained by them,” said a local source. “Sometimes they’re arrested, and taken to the security branches for interrogation.” The aim of this pressure from the regime’s perspective, said the source, is “to prevent the possibility of any activism against it in future; to clear the ‘reconciliation’ zones of disloyal elements and banish the specter of opposition, armed or peaceful.”

In October 2018, the regime ostensibly issued an amnesty for military defectors and those avoiding conscription. In theory, this amnesty dropped “all criminal charges against fugitives, internal and external, as defined by the military penal code.” Yet the pardon did not extend to “those in hiding, or fugitives from justice,” except if they turned themselves in within four months in the case of “internal fugitives,” and six months for those abroad.

A defector who agreed to join the regime army after the issue of this amnesty told Al-Jumhuriya he was “surprised,” given the assurances against punishment, to be “received with insults, and then transferred to the security branches. Regime soldiers took us to one of the branches, where we were interrogated about the events of the previous years.” He and the others with him faced not just verbal but physical abuse too, as though they hadn’t voluntarily enrolled themselves. They got out twenty-five days later, when the vast majority were sent to the frontlines against the Islamic State (ISIS) in the eastern desert, or else to Idlib to fight opposition factions there.

A regime member recounts what transpired with another conscript, who undertook military service as part of his “settlement” process. After being assigned guard duty, he was sent out into the field without any weapons. “The regime generally doesn’t provide weapons to the former defectors who sign on,” he said, adding that the soldier’s superiors mistreated and humiliated him. “You spent seven years fighting and killing us, do you really think we’re going to treat you like the others?” one senior officer reportedly told the recruit. “I’m going to make an example of you.”

The recurrent tales of these practices have pushed hundreds of young men wanted for military conscription or interrogation to seek refuge in parts of south Syria’s Daraa and Qunaitra provinces where the regime’s forces and security agencies are more hesitant to enter, fearing clashes with armed locals and former opposition militants. The stability of these particular areas is also a key priority for Israel, which borders them, as well as Russia, which takes its role as a “guarantor” of the agreements more seriously here than elsewhere. Moreover, unlike the case in, say, Eastern Ghouta, “reconciliation” in the southern provinces did not involve a mass displacement of residents, meaning that the prevailing public opinion remains firmly opposed to the regime, whose control over the area is still tenuous, limited to checkpoints on the outskirts of certain towns and villages.

A media activist in southern Syria told Al-Jumhuriya that his name had been included in a security report on account of his prior media work against the regime, and that he tried several times to obtain a “settlement” document, but was consistently rejected, even though he had never taken up arms. The regime, he said, “regards peaceful activity as no less dangerous than militant activity,” and gives unarmed opponents no greater clemency than their armed counterparts.

The same media activist added that he is unable to move freely outside a very limited patch of territory for fear of arrest, at a time of great uncertainty about the future of Syrians in formerly opposition-controlled areas. Hundreds of other individuals known for their humanitarian or media work in the past are in the same boat as this activist, and share his grave concerns for the coming months and years, he told Al-Jumhuriya.

Quite apart from these individual cases, the activist added there are also collective measures taken against residents en masse in certain areas, such as the Damascus suburbs of Daraya and Eastern Ghouta, the remaining inhabitants of which are still forbidden from returning to their homes three years on from the regime’s takeover. In the activist’s view, this demonstrates that the regime believes no stability can be attained without “cleansing” and “homogenizing” society (to use Assad’s own vocabulary), and eliminating all dissident voices without exception; and that no reasonable solution to the conflict is possible in conjunction with such a mentality.

Linguistically, the word “reconciliation” presupposes two erstwhile antagonists who agree to put their differences behind them after a period of dispute. The regime’s policy toward those who worked against it on the military, media, and even humanitarian fronts strips this word of all meaning, turning it instead into yet another means of continuing its war and hunting down its opponents, and making an example of them, rather than engaging in anything remotely resembling reconciliation. There are many in Syria today who have grown tired of war, having come to realize the cruelty of the uneven contest. These people now tread the path of “reconciliation” with eyes wary of the daggers of vengeance glinting at them on the horizon.

[Editor’s note: The article was originally published in Arabic on 17 April, 2019]