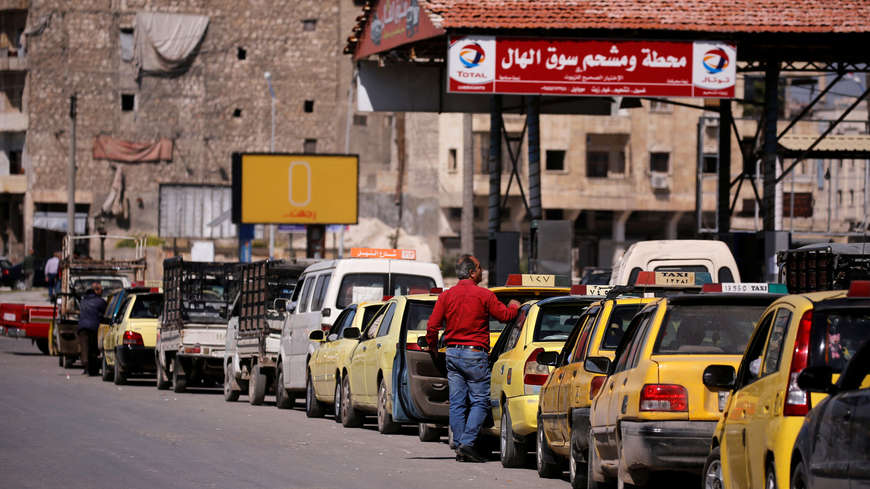 Syria’s oil crisis: No easy way out for Assad

Iran has little incentive to help the Assad regime resolve its acute oil crisis, while any help from Moscow will come at a steep price, argues Salam Alsaadi.

On May 10, Iran reportedly managed to send its first illicit oil shipment to Syria since the re-imposition of US sanctions in mid-October last year, which have prevented oil tankers from reaching Syria since that time. Syrian officials seemed very cautious, refraining from celebrating the development and from spreading hope among an angry population that the shipment will finally ease the severe fuel crisis that has persisted without respite since March. They know very well the country’s oil shortage won’t be resolved any time soon.

To substitute for the blocked Iranian oil paid for with Iranian credits, the Syrian regime needs $200 million a month to import crude and petroleum products from other countries, which in turn requires further help from Iran, the regime’s closest ally. Yet Tehran appears unwilling to finance Syria’s oil imports, due, on the one hand, to its own financial crisis, which has undermined its ability to support militant groups and political allies in the region; and on the other hand to its belief that reducing financial support to its ally is no longer a threat, neither to the regime itself nor to Iran’s already deep-rooted influence in the country.

The sanctions target Iran, not Syria

The fuel crisis doesn’t point to the effectiveness of the “Western siege” and the “economic warfare” on Syria, as Syrian officials, including Bashar al-Assad, would like Syrians and Western public opinion to believe. Rather, it indicates the effectiveness of the US sanctions against Iran, and the determination of the Trump administration to enforce these sanctions strictly. Despite warnings from the US Treasury Department that entities and individuals supplying oil to the Syrian government will be sanctioned, it seems the US only carries out these threats when the oil in question is Iranian.

In other words, the Syrian regime maintains several options to make up for the Iranian oil. The majority of Western sanctions on Syria mainly target the business circle tied to the regime. The partial sanctions aimed at certain sectors, such as energy, technology, banks, and oil, are not imposed by the UN and thus don’t prevent Syria from importing oil from other countries. That is indeed what the regime has already been doing, dealing with Russia, Ukraine, and Russian-occupied Crimea. At any rate, this is likely to continue to be the case unless and until the “Caesar Syria Civilian Protection Act” is approved, which would target non-Americans conducting a wider variety of business with the Syrian regime.

The regime can make secret deals, as it has already been doing for the past few years, allowing it to receive substantial imports of Iraqi crude oil from an Egyptian port. When needed, Iraq and Lebanon have been part of Assad’s supply chain as middlemen to ship oil by land, providing around 20 percent of government-held areas’ oil needs.

In addition, Damascus has been receiving oil shipments from Washington’s ally in Syria, the Kurdish-led Syrian Democratic Forces. The SDF controls most of Syria’s oil fields in the country’s northeast and has long sold crude oil, wheat, and other commodities to the Syrian regime through local intermediaries. The oil smuggled from SDF-held territories to parts of Syria west of the Euphrates, controlled by the regime, is estimated at around 16,000 barrels per day. Until recently, there was no tangible US effort to stop these oil shipments, which have flourished during the current acute fuel shortages.

Recently, however, the sale of crude oil to the Syrian government, in addition to other socio-economic grievances, has infuriated Arab inhabitants of Deir al-Zor province, resulting in a wave of protests against the SDF’s rule. Only since these protests erupted has the US appeared more serious about clamping down on smuggler networks; conducting airstrikes targeting the smuggling infrastructure, including oil pipelines that connect the eastern and western banks of the Euphrates.

With the Syrian regime’s access to Iran’s oil blocked, its main problem becomes not to evade US sanctions, which is quite possible, but rather to allocate $200 million a month for oil imports. This is well beyond Syria’s current financial capabilities and requires the aid of its allies.

Iran, however, seems neither able nor willing to commit this money, for two reasons. First of all, Iran’s own economy has been hit hard by the re-imposed US sanctions. According to the IMF, Iran’s GDP is expected to shrink six per cent this year. This has sapped its ability to support and finance its allies and proxies in the region who are themselves showing signs of financial strain. This is clear not only in Syria, but also in Lebanon, where Hezbollah’s Hassan Nasrallah has urged supporters to send donations to his group. Hezbollah has reportedly been forced to introduce severe spending cuts; lowering salaries, withdrawing fighters from Syria, cancelling television programs, and laying off staff. On Monday, it was even reported that Yemen’s Houthi militants were carrying out a fundraising campaign on behalf of the Lebanese organization.

Secondly, Syria’s shortage of Iranian oil is not expected to have critical military consequences from Tehran’s perspective, since the Assad regime is no longer under the existential threat it faced between 2011 and 2017. Iran’s oil has been crucial for the Syrian regime to fuel its military machine and win the war. As of 2018, however, the regime, with its Iranian and Russian allies, has re-conquered vast swaths of territory and largely defeated its opponents. The international community and the US have accepted the “political reality” of Assad remaining in power, while regional states including the United Arab Emirates and Bahrain have reopened their embassies. The role of oil in providing services and meeting the Syrian population’s needs is something Iran couldn’t care less about.

Iran’s refusal to fund Syria’s oil imports is not expected to undermine its influence in the country. Reducing Tehran’s influence in Syria is a stated goal of the Trump administration, which might imagine it has something to boast about in Iran ceasing to be the regime’s primary supplier of oil. Yet Iran’s influence and indeed dominance have already reached very deep inside Syria’s state and society.

Iran has developed a significant presence and long-term influence in the country’s coercive institutions, military and security-related. Iran-backed militias continue to expand, occupying large swaths of the country and outgrowing the government’s own armed forces. The Iranian Revolutionary Guard is not only creating its own system of proxies that are outside the control of the Syrian government, but also integrating to become “an indivisible part of the system,” as one analyst has phrased it.

Moreover, systematic forced displacement, which has been part of a broader policy of “demographic change,” has further strengthened Iran’s influence in the country. The regime has intentionally displaced opposition communities from certain strategic locations, replacing them with mainly-Shia regime loyalists. It has also pressured families in newly-captured areas around Damascus to sell their properties at very low prices to real estate agents linked to Iran and its proxies, including Hezbollah. In addition, Iran has been working on cultivating loyalty, recruiting Syrians, and even winning converts to the Shia Muslim sect.

At the economic level, Iran maintains privileged access to Syria’s economy and is already reaping the benefits by obtaining reconstruction and new investment contracts, as well as striking trade deals.

In short, Iran seems to believe that reducing financial support to its ally is no longer a threat, neither to the regime nor to its own well-entrenched influence in the country. This leaves Damascus with no choice but to turn to Moscow for help. Recent reports about renting the port of Tartus to Russia for 49 years may indicate that this is precisely what the regime has done. Yet Moscow, evidently, will seek substantial compensation for this expenditure; compensation likely including but not necessarily limited to consolidating long-term unfettered access to the Mediterranean through Syria’s ports, as well as acquiring greater access to the key sectors of the Syrian economy.