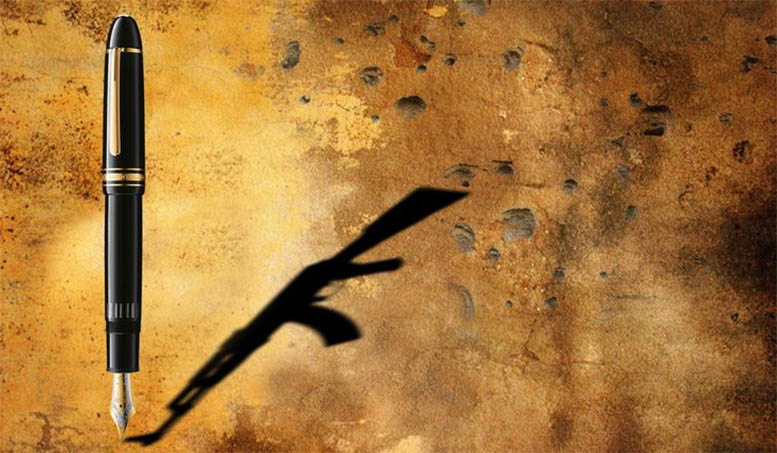 Like many genocidal regimes before it, the Assad regime is now formally engaged in a pseudo-academic re-writing of history. A genocide researcher outlines how a credible and rigorous study of the Syrian conflict might instead be approached.

“If the Party could thrust its hand into the past and say of this or that event, it never happened—that, surely, was more terrifying than mere torture and death.”

In June 2016, when the world’s attention was turned to the Assad regime’s final assault on besieged Aleppo and the dwindling fortunes of the Islamic State (ISIS), a new NGO called the Watan Document Foundation was founded in Damascus by a certain Dr. Bouthaina Shaaban. The NGO’s goal was “oral documentation with the aim of preserving and documenting the national memory” of the Syrian conflict, Shaaban stated in an interview. According to its slick-looking website, the WDF “strives to preserve the eyewitness’ [sic] contemporary national memory and protect it from loss, distortion or fraud” by creating an oral history archive, documenting a range of relevant topics, and writing a contemporary history of the Syrian war:

The war on Syria has deeply affected Syrian society at all levels. The documentation of this war through the testimonies of people and their suffering will form the history of this stage. This will be carried out depending on a national effort and according to a scientific approach, so that these documents become a historical reference for researchers and future generations with the purpose of preventing others from writing our own history according to their own interests.

Shaaban, a long-time foreign policy and media advisor to both Hafez and Bashar al-Assad, holds a PhD in English literature from the University of Warwick, and has worked for many years as a professor at the Department of English at Damascus University. She is the author of several books, including a set of interviews with Syrian women about their lives and the roles of women in Syrian history and society. She has been very visible as the public, intellectual, and international face of the Assad regime, and throughout the conflict has given countless interviews to the foreign media, toeing the party line of denial and deflection. It is therefore not entirely unexpected that the Assad regime’s intellectual figurehead would launch a pseudo-academic campaign of lies consistent with the regime’s record of censorship and whitewashing of crimes. Indeed, the regime’s policy on its own violence was and is characterized by three Ms: misrepresentation, mystification, and manipulation. The population inside Syria is held captive without the freedom of speech needed for giving such testimonies. Instead, there is Soviet-style post-war silence and censorship, which by themselves negate the legitimacy of Shaaban’s initiative. In the face of so much disinformation, how can we understand the conflicts over historical narratives of Syria, and what is a proper strategy to follow?

First and foremost, it must be recognized that “narrative wars” are not an abnormal process during and after violent conflicts, including wars and genocides. Nor are they limited to the “post-truth” era, because states have denied and obfuscated their crimes such as mass murder throughout history. In 1915, the Young Turk regime staged photos of “armed Armenian banditry” by hauling in terrified Armenian prisoners behind a stack of weapons (probably from the Ottomans’ own depots), and taking photos that to this day are used to deny the Armenian Genocide. Or take the eerily precise photoshopping of Stalin, who erased his intelligence boss Nikolai Yezhov from history long before modern airbrushing software existed. More recently, the Suharto regime’s 1965 genocide of half a million alleged Indonesian Communists was closely followed by a psychological warfare campaign of censorship and denial on the one hand, and a serious effort to write its history on the other hand. And the Srebrenica massacre of July 1995 was and continues to be denied or trivialized by various Serb(ian) politicians, including heads of state and dubious institutes.

Indeed, Shaaban’s initiative is not unique in the history of state-sponsored mass murder. She has now joined the pantheon of denialist state intellectuals whose sole purpose is the moral neutralization and contortion of the historical record of their own state’s violence. Her counterparts are such people as Dr. Yusuf Halaçoğlu, who spent entire decades of his life singularly obsessed with producing denial of the Armenian Genocide. Not only was he the long-time director of the Turkish Historical Association, which churned out screed after screed of denial and distortion, but was also a member of parliament with the openly fascist Nationalist Action Party. Or take Biljana Plavšić, Professor of Biology at the University of Sarajevo, who worked at academic institutions in London, Prague, and New York before ending up as one of the intellectual architects of Bosnian-Serb nationalism and ethnic cleansing during the Bosnian War. A member of the Serbian Democratic Party, she kept close relations with Serb paramilitary groups who raped and rampaged their way through Bosnia, and was sentenced by the ICTY to 11 years in prison for crimes against humanity.

Fortunately, in the Syrian case, there are a number of excellent initiatives as well, including but not limited to: the Syrian Archive; the Zakera Project; the Umam Documentation and Research Centre; the Syrian Prints newspaper archive; and various oral history projects launched, for example, by the International Coalition of Sites of Conscience; Badael; and the NIOD Institute. In principle, a very strong argument can be made for the establishment of an entire institute for researching the Syrian conflict. In fact, the institute with which I am affiliated originally began as such an initiative: in March 1944, the Dutch Minister of Education, Culture and Science, Gerrit Bolkestein, appeared on Radio Orange to request the Dutch population to keep their diaries and letters on the war for post-war documentation and research. The Netherlands Institute for War Documentation (NIOD) was officially established on 8 May, 1945, three days after liberation, and the Dutch-Jewish journalist Loe de Jong became its first director. Much like Shaaban’s WDF, NIOD was also established towards the end of the war, and also collected testimonies on war and persecution. Unlike WDF, however, NIOD operates within an academic framework of the highest standards, and confronts contested and controversial topics, including Dutch state violence.

Formulating a research agenda for Syria

In order to circumvent the pitfalls of narrative wars, it is vital to formulate a research agenda or program for likely contestation and research. This vision must address two substantial issues of truth-making: fact-finding and interpretation. First, the “fog of war,” intentional blurring, and contestation of factual events that have occurred requires a rigorous examination of those events and a clear separation between fact and fiction, to the best extent possible. Second, all historical events are subject to honest interpretation, and the Syrian conflict is no exception. A better understanding of this often confusing or misrepresented conflict also requires a set of legitimate, grounded interpretations that will clarify the causes, courses, and consequences of the conflict. The potential components of a rigorous research agenda outlined below are intended as suggestions, not an exhaustive list, but due to their relevance and complexity, they could even be tackled as separate studies.

Factual issues: what happened, and how did it happen?

Interpretation: why did it happen, and how did it develop?

These and many other large, factual, and interpretive issues are not driven by a legal, political, or moral agenda, but by one that serves the historical record, and therefore should be top priority for researchers. The regime has long obstructed truth-finding with regards to many of these issues, and we can be sure that it will continue to do so—with support from the WDF and others. But if the perpetrators can stick to their guns, we can stick to ours.

Conclusion: the truth shall set us free

The Syrian conflict is one of the most contested conflicts in history. Ideological and geopolitical biases have prevented a complex picture from being sketched, and produced too many one-sided narratives. But neither fact-finding nor interpretation is a black-and-white affair. The complexity and ambivalence of the conflict can be found in a broad range of topics, such the many inconvenient and politically inexpedient forms of violence. For example, the Assad regime claimed to fight for Palestine, but has killed more Palestinians than Israel by a long stretch. On many occasions throughout the conflict, the regime sent the army into loyalist areas, not to fight the rebels, but to stop its own irregular militiamen (shabbiha) from looting. The regime claimed to combat terrorism, but until 2011 was working hand in glove with those same al-Qaeda fighters it had sent to Iraq, who, only a few years later, as hardened fighters would set up Jabhat al-Nusra and wreak havoc on loyalist neighborhoods.

And the regime is hardly the only actor with such inconsistencies to explain. The Kurdish People’s Protection Units (YPG), which claimed to champion Kurdish rights, were involved in the suppression of other Kurdish social and political movements in Rojava/Jazeera. ISIS purported to fight with Sunni Muslims against the “apostates” of the regime, but it sold oil to that same regime and executed Sunnis as “spies” on the most spurious of pretexts. The revolution, too, had to grapple with some embarrassing events: many Aleppo revolutionaries who supported the charismatic rebel commander Abdelqader Saleh were shocked when they realized that rural class resentment drove his Tawhid Brigade to loot upscale areas of Aleppo on a massive scale. And what to say about Syria’s entangled histories? The many mixed marriages and multi-sectarian families (Sunni/Shia, Christian/Muslim) that fell apart? Or those tribes in eastern Syria that first worked with the regime, then with ISIS, then with the Kurdish-led SDF, and then again with the regime? Obviously, no conflict is black and white, but it is these types of greyscales that offer a deeper understanding of Syria’s dynamics. We need a patient, meticulous analysis of these situations and processes, steering clear of moralist, dichotomous portrayals.

The Syrian cataclysm needs a broad-based research program that addresses all of these issues, and more, so that we gain lucidity and combat denial and distortion. Not for the sake of advocacy, but for the sake of truth.

Dr. Uğur Ümit Üngör is Associate Professor at the Department of History at Utrecht University and Research Fellow at the Institute for War and Genocide Studies in Amsterdam. His main area of interest is the history and sociology of mass violence. His publications include Genocide: New Perspectives (Amsterdam University Press, 2016), Confiscation and Destruction: The Young Turk Seizure of Armenian Property (Continuum, 2011) and the award-winning The Making of Modern Turkey: Nation and State in Eastern Anatolia, 1913-1950 (Oxford University Press, 2011). He is currently writing a book on political violence in Syria.