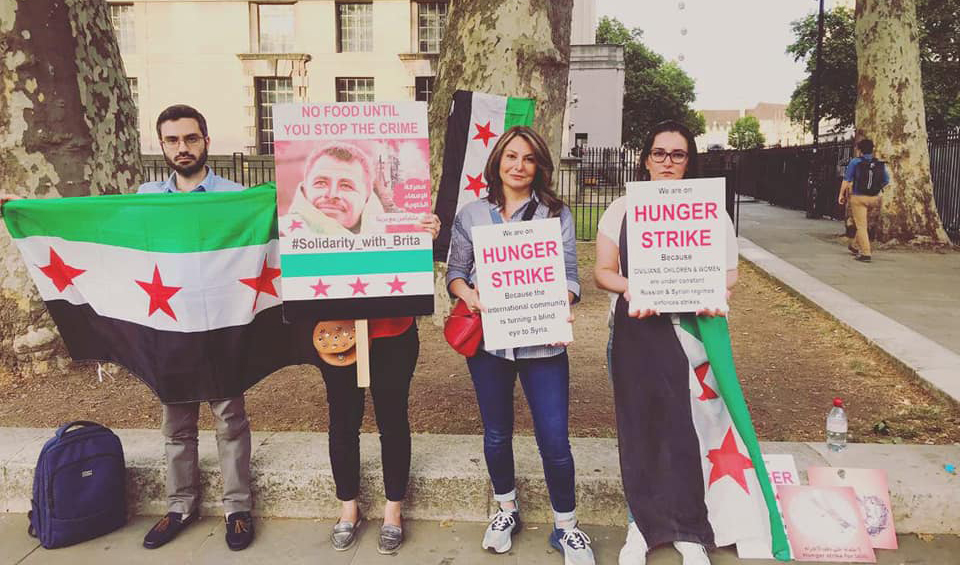 Over sixty activists from Syria and elsewhere are currently holding a collective hunger strike—dubbed the “Empty Stomachs” campaign—calling for an end to the bombardment of Idlib.

For Syrians, each passing day seems worse than the one before it. The more regional and international forces shape affairs in the country, the more Syrians themselves feel powerless. We are all helpless, and almost entirely incapable of influencing the situation which runs so clearly to our disadvantage. We’re unable to stop the ever-mounting death toll; unable to provide a bare minimum of dignity to the displaced sleeping hungry, worrying their tents may fly off in a storm; unable to stop the absurd machinery of destruction; unable to join the shredded pieces of the map together again; unable to save the young men and women from the whips of the lashes in the prison cells.

Faced with this spectacle, many Syrians fall into despair and turn away. Now, however, one group of activists has chosen to submit to this injustice no longer, and to try to use their sorrow and despair to contribute to changing something, and turn their weakness into an active force in the battle.

Over sixty activists around the world are taking part in a collective hunger strike, in a campaign dubbed the “Empty Stomachs,” to call for an end to the ongoing bombardment of Idlib by Assad regime and Russian forces, which has claimed hundreds of civilian lives in recent months.

The hunger strike began with the engineer Brita Hagi Hasan, a former head of the Free Aleppo Council governing body, with the aim of pressing the world’s political leaders to intervene to stop the military campaign and save Syrian lives. Dozens of other activists have since joined Hasan, after his health situation deteriorated in front of the United Nations office in Geneva, leading to his hospitalization. A hashtag, #BritYouAreNotAlone, circulated on social media.

The campaign, which has now grown to comprise sixty hunger strikers, hopes to draw attention to what’s happening in Syria in general, and Idlib in particular. In a statement, the strikers have called on world leaders to “take responsibility for the unique and horrendous catastrophe experienced by the Syrian people, and play a role commensurate with the scale of this historical, moral, and legal responsibility,” pointing to “the Syrian disaster entering its ninth year, and the exorbitant crimes committed by the regime and its Russian and Iranian allies, as against the silence of the international community, which bespeaks either impotence or approval.”

In recent days, the Syrian Response Coordination Group has published data to the effect that over 680 people were killed in Idlib and the provinces of Hama and Aleppo between February and June of this year, including over 200 children. The total number of internally displaced persons in northern Syria now exceeds 600,000, the group added. The data further indicated that airstrikes have targeted such vital civilian infrastructure as hospitals, refugee camps, schools, and mosques, underscoring the appalling humanitarian situation and paucity of aid for the displaced.

“If not me, then who? And if not now, when?” said Nasrine Trabulsi, the spokesperson for the Empty Stomachs, when asked by Al-Jumhuriya why she had joined the campaign. It was not initially planned as a collective hunger strike, Trabulsi said, but rather began with Hasan, until others joined of their own volition after the deterioration of his health, which aroused sympathy for the cause.

“It became like a relay race, each of us handing the baton to the other. Brita will get tired, and we in this campaign don’t want to make anyone bear more than they can handle, nor do we wish to add to the number of Syrian casualties,” said Trabulsi.

“For years, Syrians have felt continual despair due to their accumulated losses, and the destruction of their cities, and the unceasing slaughter. These built-up feelings, which further compounded after the killing of Abd al-Basit Sarout, and the resulting collective sorrow, have pushed us to wonder: how much longer will this terrible state of affairs go on? How can this sorrow be employed in the form of protest, and action to stop the crime?”

“By the thousands, Syrians were forcibly displaced aboard the regime’s Green Buses from all corners of the country to Idlib. The question being asked urgently of decision-makers these days is where will the millions of Syrians in Idlib go after these military campaigns? Where will the Green Buses head next, if this area is demolished like all the others before it?”

Adding to the problem, said Trabulsi, is the near-total absence of Syria coverage in the international media today.

“We notice this with the people speaking to us in the sit-in we hold in London; everyone comes up and asks about ISIS when they see the word ‘Syria’. This is due to the media, which focuses on one part and ignores the other. For many years now, the Syrian situation has only gone from bad to worse; civilians are still being bombed, and living in tents or detention centers, whether ISIS is around or not.”

The principal aim of the campaign, Trabulsi continued, is to protect Syria’s civilians and spare them the consequences of the military conflict. In addition, she cited the thousands of detained and forcibly disappeared, whose fates the campaigners seek to uncover. “Our ordeal is enormous; enough to turn a child’s hair white. And the world is blind to what’s happening,” she said in a voice quivering with grief and fatigue.

Non-Syrians have also joined the campaign, including the American activist Cory Strachan and the Italian poet Francesca Scalenci. The latter told Al-Jumhuriya she’s been following events in Syria for years, and is a member of an organization called Free and Democratic Syria, founded by Italians and Syrians.

“Nasrine asked me to help publicize the Empty Stomachs’ activities, and I felt it wasn’t right for me to merely applaud what they were doing, or say I supported them by publicizing their cause. So I decided to take part in the hunger strike with them,” said Scalenci.

“What we in this campaign want is to draw attention to the ongoing suffering of Syrian civilians. The world perceives that Assad has achieved peace. This is anything but peace. People are still being bombed, still being disappeared, still in danger. Syrians have been deported from Lebanon without anyone caring, despite the risks to their lives. I know my hunger strike will ultimately change nothing, but it’s an expression of solidarity with Syrians, and a way of telling them they are not alone.”

[Editor’s note: This article was originally published in Arabic on 8 July, 2019]

Mosab Al Nomairy
Alex Rowell Alex is a Beirut-based writer, translator, and managing editor of Al-Jumhuriya English. His first book, 'Vintage Humour: The Islamic Wine Poetry of Abu Nuwas', is due to be published by C. Hurst & Co. in November 2017. He tweets @alexjrowell.