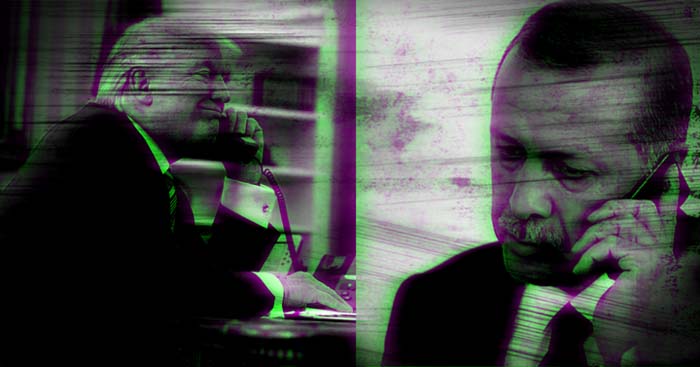 24 long hours east of the Euphrates

After 24 hours of confusion and contradiction, it now appears any hypothetical Turkish operation in northeast Syria will be much more limited than first thought.

The statement on Syria issued by the White House on Sunday evening EDT (early Monday morning in Syria) restored the situation in the region east of the Euphrates River to the uncertainty that followed President Donald Trump’s announcement of a full US troop withdrawal from Syria last year. Though the latter decision was never in fact implemented, the potential consequences of its implementation worked effects on the ground in Syria nonetheless. On Sunday, the White House appeared to have done the same again, surprising all actors involved by seemingly giving Turkey a green light to carry out a military operation in the area controlled by the Kurdish-led Syrian Democratic Forces (SDF) with US assistance.

“Today, President Donald J. Trump spoke with President Recep Tayyip Erdogan of Turkey by telephone. Turkey will soon be moving forward with its long-planned operation into Northern Syria. The United States Armed Forces will not support or be involved in the operation,” read the statement, adding that US forces would no longer remain “in the immediate area” (the Syrian-Turkish border zone) and declaring Turkey would “now be responsible for all ISIS fighters in the area captured over the past two years” after European states “refused” to allow the return of their citizens among the group’s members.

A few hours after the surprise statement, US troops stationed in the border towns of Tal Abyad and Ras al-Ain withdrew from their positions, suggestion the likelihood that Turkish forces would begin operations very soon. However, a subsequent statement by a Turkish official to Reuters appeared to diminish this likelihood, with the unnamed official saying Turkey would wait for the withdrawal of all US forces from the field of operations before launching the battle; a process the official said could take around a week.

For its part, the SDF leadership said in a statement issued by its spokesman Mustafa Bali that Washington’s proposed action was a stab in the back, and that Turkey’s operations would undo the great international efforts exerted to fight ISIS. In further comments to the media, the SDF hinted that one of the first consequences of the US allowing Turkey to go deeper into northeast Syria would be the Assad regime assuming control of Manbij.

Meanwhile, Turkish media published pictures Monday of what were said to be members of the Ankara-backed Syrian National Army (SNA) preparing for a move into eastern Syria to launch military operations there. Turkish Foreign Minister Mevlüt Çavuşoğlu also made a statement Monday that his country sought to “clear the region from terrorists.”

Back in Washington, reactions to Trump’s decision came thick and fast, with even a number of Republican senators denouncing the move, foremost among them Senator Lindsey Graham, who has historically taken an interest in Syria policy. On Monday, Graham took to Twitter to say, “This decision to abandon our Kurdish allies and turn Syria over to Russia, Iran, & Turkey will put every radical Islamist on steroids. Shot in the arm to the bad guys. Devastating for the good guys.’’ Graham also threatened to work with Democratic lawmakers to place bipartisan sanctions on Turkey if it “invaded” northeastern Syria, and to “call for their suspension from NATO if they attack Kurdish forces who assisted the U.S. in the destruction of the ISIS Caliphate.”

Similarly, Senate Majority Leader Mitch McConnell declared Trump’s actions would undermine US national security and possibly strengthen ISIS. In a statement Monday, McConnell said, “A precipitous withdrawal of US forces from Syria would only benefit Russia, Iran, and the Assad regime.” McConnell further asserted that the vast majority in the Senate opposed President Trump’s decision, potentially rendering the latter open to a veto by Congress. This rare public disagreement with the president by senior Senate Republicans extended to many other figures as well, such as Senator Patrick Toomey, who said, “This betrayal of the Kurds will also severely harm our credibility as an ally the world over. President Trump should rethink this decision immediately.”

In a pattern now familiar for Donald Trump, a new tweet on Monday evening following the day’s hubbub re-shuffled the deck all over again. The 45th president of the United States pledged to “totally destroy and obliterate the Economy [sic] of Turkey” if Ankara undertook to do anything “that I, in my great and unmatched wisdom, consider to be off limits.” This pronouncement led to a reconsideration of the original White House statement and its implications, not least after several US media outlets reported statements by a senior State Department official offering a different interpretation of the phone conversation between Trump and Erdogan. The call was initially positive and touched on several points, including the S-400 missile issue, this official reportedly said, but it took a turn for the worse when the Turkish president mentioned his intention to launch a military operation in northeast Syria on the grounds that the present condition of the “safe zone” failed to meet Turkey’s demands. Trump then surprised his counterpart by saying the US would not support such an operation in any way, calling it “a very bad idea” that would “not provide better security for Turkey and the people of the region in the fight against ISIS.”

The same State Department official also mentioned a discrepancy between the respective statements of the Turkish presidency and the White House, with Ankara mentioning an invitation to Erdogan to visit Washington to discuss questions of mutual interest, while the White House made no reference to any such invite. According to the official, this indicated the invite was offered during the positive part of the conversation, only to be withdrawn later.

These developments change the perception that the White House statement gave Turkey a green light to carry out a large-scale operation in northeastern Syria. Subsequent remarks by Trump appeared to walk the original statement back even further, with the president explaining what he meant by “limits” that Turkey should not cross, and reiterating that he would “decimate” the Turkish economy if Ankara dealt inhumanely with the Kurds. The green light, in other words, has turned somewhat orange.

Elsewhere, a senior administration official was quoted in Foreign Policy as downplaying the significance of the US troop withdrawal from the Turkish border zone, telling reporters it did “not constitute a withdraw[al] from Syria […] We’re talking about a small number of troops that will move to other bases within Syria.” The Pentagon also announced that Turkey had been effectively excluded from the airspace over northeastern Syria as of Monday, substantially limiting the effectiveness of any hypothetical military campaign in the region.

As such, yesterday’s atmosphere of support for a Turkish operation in Syria has receded, and threats by US politicians to impose sanctions on Turkey could effectively end the long-standing alliance between NATO members Ankara and Washington were the former to launch large-scale military operations.

Despite Trump’s tweet following the White House statement in which he spoke of a complete US withdrawal from Syria, subsequent pronouncements and developments, as well as information reported by Al Modon on Monday, suggest US forces have merely relocated to the 17th Division base north of Raqqa, not outside Syria altogether. This gives the impression that the room for maneuver granted to Turkish forces is very small indeed, making it likely that any military operation would be limited to Tal Abyad and its outskirts; an operation that could both satisfy the Turkish president—who, two days ago, announced that military operations could begin at any moment—and be disregarded by Washington at the same time.

With their repeated, conflicting transformations and declarations, the past twenty-four hours stand as an apt summary of all the ineffectual confusion that characterizes international policy in Syria.