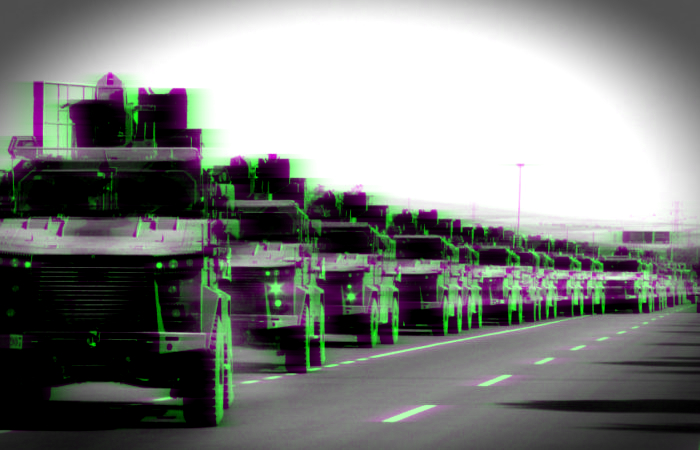 An unpeaceful week in Syria

One week on from the Turkish military’s launch of “Operation Peace Spring” in northeast Syria, Ankara’s forces and their Syrian allies have made some tangible advances on the ground. They have taken control of the border town of Tal Abyad in Raqqa Province, east of the Euphrates, along with several dozen smaller towns and villages around and between Tal Abyad and Ras al-Ayn (known to Kurds as Sari Kani), as well as much of the highway linking Aleppo with the city of Hasakah, near the Iraqi border.

Battles of varying intensity continue on several fronts, most notably at Ras al-Ayn, which Kurdish-led Syrian Democratic Forces (SDF) fighters succeeded in retaking from the Turkish-backed “Syrian National Army” (SNA) proxy force. Other notable fronts include Hoshan, leading to the town of Ain Issa to the south of Tal Abyad, and clashes over the road to Tal Tamr south of Ras al-Ayn.

Scores of civilian casualties have been recorded in the course of the week, with the Syrian Observatory for Human Rights (SOHR) reporting 71 lives lost as a result of Turkey’s activities as of Tuesday. Counter-fire by the SDF on territories controlled by Ankara and its proxies in Aleppo province, as well as on Turkish soil itself, including the border towns of Nusaybin and Akçakale, has caused dozens of further civilian casualties as well. The SOHR also reports that over a quarter of a million people have been displaced by the hostilities, many of them living in dire conditions due to a lack of support and emergency first aid.

In parallel to these operations, the United States has begun large-scale military withdrawals from northern Syria, pulling troops out of the city of Manbij, where they were replaced by Syrian regime forces in accordance with an agreement reached between the latter and the SDF leadership. According to leaks, negotiations are underway between the SDF and the regime under Russian auspices with the aim of handing over all SDF frontlines and territories to Damascus. As yet, there is no confirmation of such an agreement being reached, but the continued withdrawal of US forces makes it a strong possibility in the coming days, as suggested by the deployment of regime forces in several areas including Manbij and its surroundings; the 93rd Brigade base near Ain Issa in central Raqqa province; the town of Tal Tamr and its environs in eastern Hasakah province; and military sites near the city of al-Tabqa and the Euphrates Dam.

It remains uncertain how much further the US will withdraw from Syria, and whether the retreat will be political as well as military. Washington continues to try to control the situation by pressing Ankara for a ceasefire—something the Turkish president flatly rejected on Tuesday—and signaling toughness regarding the entry of Assad’s forces into areas such as Kobanî, despite the spectacle of US military convoys peacefully passing trucks on a highway carrying regime troops toward Manbij. This was perhaps the context in which to read the bombing of a regime convoy by unknown aircraft near the village of al-Asayla outside Manbij. International Coalition forces also continue to affirm their presence in Deir al-Zor province through repeated air raids on Iran-backed militias in the area.

The overall trend does nonetheless appear to be heading toward a full US exit from Syria, to judge by President Donald Trump’s statements and actions. In this he faces resistance from certain circles within the Pentagon and Congress, as well as Washington’s key Coalition allies, especially the UK and France, who have taken a firmer stance on Turkey’s latest operation, even though officials from both countries also speak of pulling their own forces from Syria soon. France’s Foreign Minister Jean-Yves Le Drian has called for a meeting of Coalition member states to discuss the differences between the US and Europe in this regard.

For its part, Moscow says it has prevented clashes between Turkish and Syrian regime forces after the latter began deploying near the frontlines. So far, there does not appear to be a plan for the regime to fully take over those parts of SDF-controlled territory from which US forces suddenly withdrew, leaving them at the mercy of Turkey’s operations. Nor does the regime alone possess sufficient manpower to control such a large area, which is what makes some form of Russian-brokered understanding between Damascus and Ankara a likely prospect.

“The regime’s entry into Manbij is not a very negative development for us,” Turkey’s President Erdoğan told reporters during his return from the Azerbaijani capital Baku. “Why? Because it’s their land,” he added. This statement broadly coheres with that of Youssef Hammoud, spokesman for the Turkish-backed SNA, who declared “There are no regime forces in Manbij, but rather SDF members who changed their uniforms and raised the regime flag.” In other words, these forces are not about to fight the regime in Manbij.

Also notable in the past week have been various further human rights violations, including summary executions, carried out by Turkey’s Syrian proxies. Perhaps most prominent of these was the assassination Saturday of the Kurdish-Syrian politician Hevrin Khalaf at the hands of the Turkish-backed Ahrar al-Sharqiya militia, which appeared to carry out the execution in a video circulated online.

In a statement to the Washington Post, Ahrar al-Sharqiya spokesman Hassan al-Shami did not deny the group’s responsibility for Khalaf’s murder, claiming she had not been a politician but an “American spy.” He added, “We in Ahrar al-Sharqiya and other Syrian National Army factions are partaking in the Peace Spring Operation with the Turkish brothers. The aim of this operation is combating terrorism […] If we find a terrorist or a spy, what do you expect us to do?” Such language implicates the entirety of the Ahrar al-Sharqiya faction in the crime—and indeed the leadership of the SNA umbrella to which the faction is subordinate.

On their present course, developments appear to be heading toward shared control over the Syrian Jazira region (the territory east of the Euphrates) between Turkey and its Syrian proxies on the one hand, and the Assad regime and its allies on the other, with the SDF remaining in some areas under Russian auspices pending a final agreement as to their fate. Such an outcome is not yet certain, however, particularly in the Kurdish-populated areas of Hasakah province, where Turkish forces are likely to face fiercer resistance; and in the SDF-controlled parts of Deir al-Zor province, which the US may not wish to leave for fear of their falling into the hands of Iranian militias, and whose residents demonstrated today in rejection of the entry of regime forces.

[Editor’s note: This article was originally published in Arabic on 16 October, 2019.]