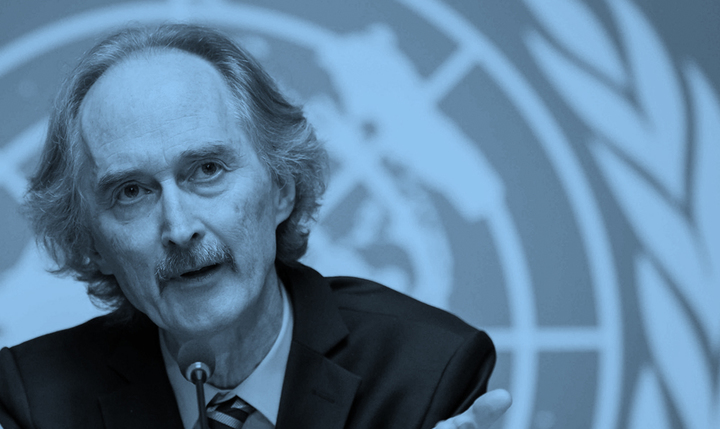 A festival of inanity

Assad himself says the “Constitutional Committee” is meaningless. Why are the UN, the EU, and the Syrian opposition going along with the charade?

Last Wednesday, the Syrian “Constitutional Committee” gathered for the first time to hold its inaugural meeting in Geneva. After an opening statement by UN Special Envoy to Syria Geir Pedersen, two more addresses were made; the first by Assad regime representative Ahmad al-Kuzbari, and the second by Hadi al-Bahra, representing the opposition. The next three days saw further speeches by various members of the three groups participating in the Committee—the regime; the opposition; and a “civil society” list selected by the UN.

In their addresses, the regime’s delegates paid tribute to Assad’s army, causing disturbances in the room that occasionally brought proceedings to a halt. In general, the regime delegates’ language was clear in its message. They regarded themselves as the true representatives of Syria, constantly repeating the usual talking points about conspiracies and armed “terrorist” groups, accusing the opposition—including “some of those present in the room”—of supporting terrorism. For their part, the opposition delegates spoke a desire to draft a democratic constitution guaranteeing equality for all Syrians, with no clear references made to those responsible for the war, bloodshed, and massacres in the country.

Despite these differences, Special Envoy Pedersen was able at the end of the three days to announce the adoption of a few points that had already been agreed in the past, such as the appointment of al-Bahra and al-Kuzbari as the Committee’s two co-chairs. An internal system and code of conduct for the Committee were also adopted, comprising general rules pertaining to its work, the talks’ mechanism, and the administration of the sessions. In addition, agreement was reached on the names of members of a select committee made up of 45 individuals tasked with drafting the articles of the new Syrian constitution, or amending the existing articles, on condition that the results of the sub-committee’s work would be discussed later within the broader Committee, which would take its decisions by consensus or a three-quarter majority vote. The 150 members of the full Constitutional Committee were only finalized a few days before proceedings began in Geneva, after several “civil society” nominees withdrew and were replaced by others.

Among other items agreed were that the select committee would begin its work on Monday, 4 November, and that its 45 members would comprise 15 from each of the three lists (regime, opposition, civil society). It remains to be seen whether an entirely new constitution will be drafted, or whether there will merely be amendments added to the constitution of 2012. Nor has the timeframe of the committee’s work been agreed thus far.

In the press conference held by al-Bahra, the opposition’s co-chair of the Committee, the tone adopted was one of utmost neutrality, with al-Bahra seemingly trying to play a conciliatory role, despite ostensibly representing the opposition. By contrast, his counterpart al-Kuzbari made no bones about standing for the regime, much like all his fellow delegates, even though they were not officially representing the regime, according to Bashar al-Assad himself, who stated they merely represented the “Syrian government’s point of view.” The implication is the regime itself need not be bound by any of the understandings that may arise from the Committee’s activities.

A number of regime delegates leaked video recordings of the sessions, focusing on the accusations of terrorism and wrongdoing hurled at the opposition during their speeches.

The message sent by these leaks was perfectly clear: no abandoning any element of the regime’s narrative about what happened and is still happening in Syria; no acknowledgment of the existence of an opposition in partnership with whom the future of Syria will be created. They affirmed the delegates’ absolute loyalty to the regime, and their commitment to the unchanged stance of their masters in Damascus. In fact, they played an even more important role, illustrating that any negotiation with the regime under the present terms and conditions is necessarily a futile discussion, just as it is also necessarily a step towards legitimizing its existence, given that it comes unaccompanied by any form of trust-building steps, such as releasing detainees, or ceasing the ferocious bombardment seen during the days of the Committee’s sessions in the villages south and west of Idlib.

It would have been interesting to see the facial expression of Geir Pedersen when reading the translated texts of the regime delegation’s statements, or that of EU High Representative for Foreign Affairs Federica Mogherini—who issued a statement describing the start of the Committee’s activities as “an important and long-awaited moment”—if and when she watched the leaked videos. The videos, and the manner in which they were filmed and leaked, underscore the inanity of the political process backed by Europe in order to negotiate with the regime; the regime which is in turn no less inane than the videos, which were published by the semi-official al-Watan newspaper. By happy coincidence, Qadri Jamil, the head of the Moscow-linked Syrian opposition platform, wrote in the editorial of his Qasioun newspaper that the start of the Committee’s activities marked a great advance, as a result of “the retreat of the American role” and the firm position of the “Astana troika” (meaning Russia, Turkey, and Iran), at the same time that Mustafa Sejari, spokesman for the Ankara-backed “Syrian National Army,” described al-Bahra’s speech as “historic” on Twitter.

It’s certainly amusing to see this harmony between Jamil, Sejari, and al-Bahra; as it is to see how participation in the Committee was taken as an opportunity to affirm loyalty to the regime and its leader Bashar al-Assad for the members of the “Syrian government’s” delegation, in the words of the UN, which persisted in using this expression even after Assad and the delegates themselves affirmed its falsehood. The members of the delegation said they weren’t representing the regime, implying the Committee’s activities have no meaning, no matter how trifling or modest. Yet the UN and opposition and “civil society” delegates keep up the odious charade that the Committee represents a highly important development.

When the jokes are over and done with, it will be necessary to ask the opposition delegates about the point of their presence in this festival of inanity; about the worthy endeavor in which they aim to partake while the regime refuses to be represented at the Committee in any official capacity. What reason is there to attend these meetings, and listen to the glorification of killers by the “government” delegates? While Assad refuses to grant those same delegates official recognition, and affirms that the outcome of the Committee’s activities will have no bearing on any future elections, which will take place under the administration of the “Syrian state” alone?

It’s the right of every Syrian suffering from the regime’s bombardment and massacres and imprisonment to know the reason for your presence in Geneva; to know what it is you’re doing if the regime’s delegation is unprepared to offer any concessions—or, rather, if the regime doesn’t have a delegation in the first place. Why did you avoid all mention of the head of the regime and his crimes in your speeches, while the pro-regime delegates hurled insults at you and every one of his opponents? Why did you make generic noises about a constitution enshrining equality and dignity for Syrians, while your position enshrines dignity neither for Syrians nor yourselves?

[Editor’s note: This article was originally published in Arabic on 4 November, 2019]