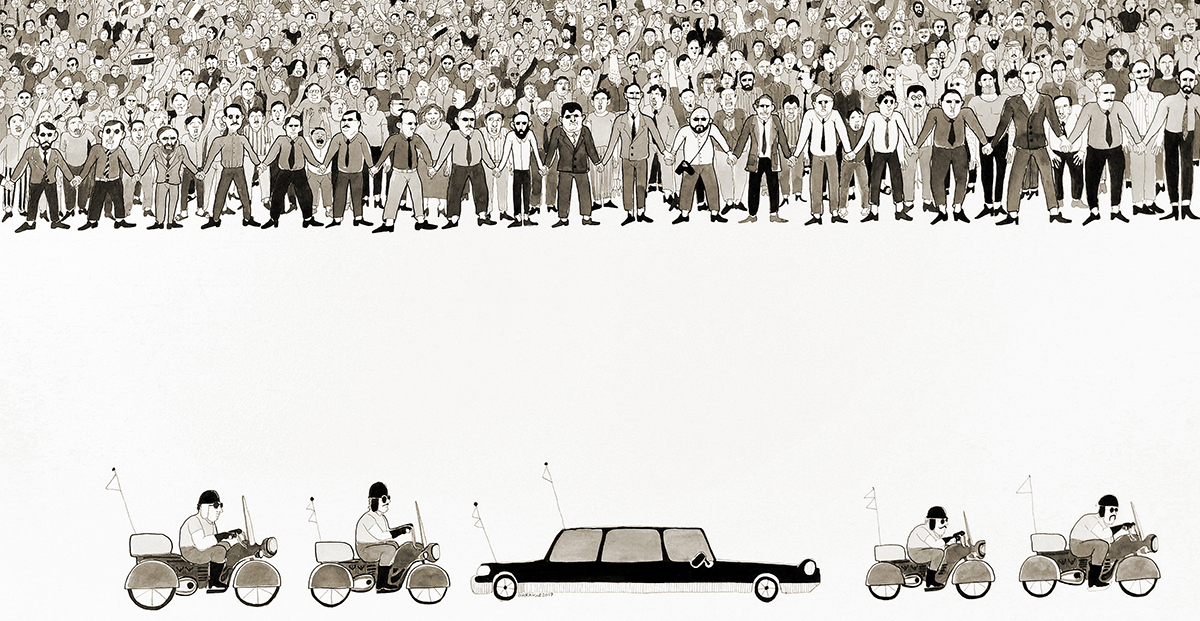 A new book of artworks tackles the Syrian regime’s use of public space as a tool of oppression, from 1980 to the present day.

Recently, I had the chance to read Assemblage, a new book of artworks by the Syrian artist and sculptor Mohamad Omran, based in Paris. The elegantly-designed volume depicts critical events in Syrian history from 1980 to the present day.

An artistic collaboration with the Syrian author Odai Al Zoubi, Assemblage presents nine events from Syria’s modern history that reflect the relationship between the individual, the public, and power. The events are tackled visually and textually in a poetic manner, interweaving with one another to form a coherent narrative that captures the darkness of this period in Syrian history. Taken in sum, the book is a valuable piece of art that moves adroitly between different media and languages, depicting the complexity of interactions between individuals and the public sphere—which, in the Syrian context, is a space of power projection.

The paintings focus subtly on the human body and the manifestations of power that subjugate it. They are not mere illustrations of the text, nor is the text simply an explanation of the paintings. Instead, the artist and author aimed to undertake a new interpretation of the interaction between the visual and the written in consideration of one and the same event. Personally, the paintings took me back to the past, with their ability to portray familiar images of home with skill and power. Home in all its contradictions is a terrifying prison; a song of revolution; gatherings with family; helplessness; and the will to live. The painting titled Nostalgia shows blurry, exhausted faces that occupy the space in a manner reflecting the unique story of each one. The destruction in the background of the painting, and the movement of the weary bodies, narrate the journey towards the unknown. Nostalgia portrays displacement as an event inscribed in the memories of thousands of Syrians after the revolution. The displacement is depicted cleanly, in a way that shows the humanitarian crisis without smothering it in political propaganda. While it doesn’t deny the significance of the political in humanitarian events, it nonetheless remains an artistic rather than political reflection.

Hope is a painting that digs up an event to which many Syrians feel attached: the picnic. It presents a tender moment in Syrians’ collective memory, where individuals gather in a warm, amusing representation. Beautiful details display the skill of the artist, who is aware of the simplicity of Syrian pleasures that represent components of the individuals’ identities. Haunted by the aggression against Syrians, Seagulls Circle the Heavens’ Gates depicts the tragedy of the funerals caused by the regime’s offensives. The funeral as a ritual of the rebirth of a new protest is illustrated in the screaming faces of interactive characters. The space connects individuals dynamically, while demonstrating their own power. The movement of the hands, mouths, and bodies challenges the passivity portrayed in Personal Reflections on the Dialectic of “I” and “We,” which is a depiction of submission to the apparatus of government. This juxtaposition between passivity and liveliness; stillness and movement; aggression and consent are the axes around which the paintings rotate to reflect on the concept of Assemblage in the Syrian context. Omran continues to display his delicate artistic vision in the project by presenting with critical reasoning such difficult subjects as detention, radicalism, marches of obligatory support, and hereditary rule.

As the title suggests, the concept of assemblage is a recurring theme in Omran’s work. The artist is able to challenge the regime’s narrative, which exploits and monopolizes public space to subjugate Syrians. Assembly in public space is one of the traumatizing experiences of Syrians as a whole, as they used to be dragged out to demonstrate their loyalty to their “eternal” subjugator.

Assemblage is a social theory that studies the relations between parts and the whole. Hegel developed his conception of the relationship between these two in his Science of Logic. In their 1980 book A Thousand Plateaus, the French philosopher and psychoanalyst Gilles Deleuze and Félix Guattari built on Hegel’s ideas while also challenging them, positing that the relationship of parts with the whole goes through a process of coding, stratification, and territorialization.

This mechanism is explored in Assemblage as a project that reflects upon the individual as a part that has succeeded in defying power. In Al Zoubi’s testimony, Dark Nights onto Rolling Waves, the author contemplates the helplessness of those facing the manifestation of power in its worst form, with Assad the son inheriting the republic after the death of his father. The manipulation of people through fear contradicts the official narrative of Syrians willingly attending marches supportive of the regime. The testimony exposes how the discourse of power imposed the ideology of worshipping the dictator by narrating the struggle between protestors and the authorities over the president’s statue. Al Zoubi describes how people resisted hegemony despite the government’s aggression. With his vision, he grasps the texture of the Syrian community that was not a whole in the Hegelian sense, but rather a set of territorialized communities that began to be decoded with the Syrian revolution. The barriers that segregated the Syrian community and de-territorialized its subjects were an integral part of the regime’s policies; policies which emptied the Syrian identity of its unity and belonging to a just system. Together, Al Zoubi and Omran thoroughly deconstruct the theme of assemblage both before and after the revolution, presenting a panoramic scene of Syrian history.

While carrying this black book between my hands, I wondered how so relatively small a book could capture the story of the Syrian people’s struggle to break the siege—both figuratively and literally—and occupy forbidden public space. Assemblage shows how Syrians challenged the discourse of power and demanded their liberty. With testimonies of Syrian women who experienced prison and displacement, along with a mix of poetry and art, Assemblage is a rich, authentic work that challenges the hegemony that continues to oppress Syrians to the present day.

Maya Boty is a Damascus-born translator and researcher currently based in Paris.