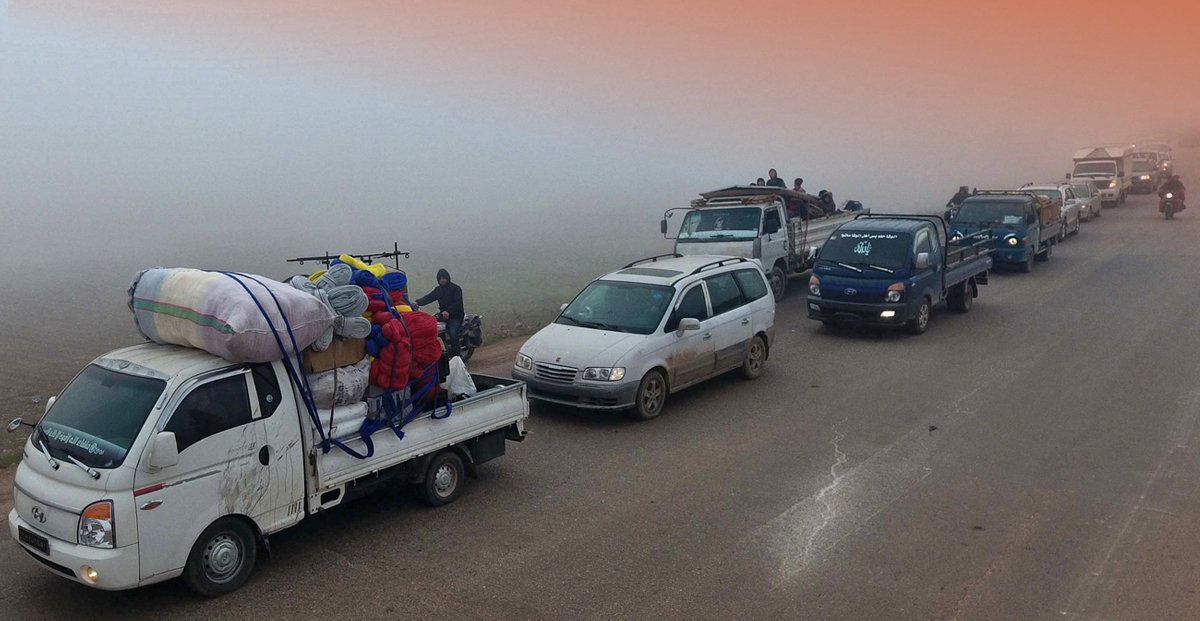 Syrians under airstrikes: You’ve got email

Instead of publicly announcing a brief ceasefire that could allow thousands of Syrians to flee bombardment Tuesday, the UN communicated the news in a four-line email to NGOs.

This morning, the UN’s Office for the Coordination of Humanitarian Affairs (OCHA) sent an email to various NGOs working in northern Syria’s Idlib Province, informing them of an agreement to temporarily allow passage out of the city of Ma’arrat al-Nu’man, the target of a fresh military campaign by the Assad regime and its Russian ally in recent days. This ostensible window of safe passage, valid only until 18:00 Syrian time the same day, pertained to the M5 highway heading northeast to the town of Saraqeb and another road leading northwest to Ariha. The short email concluded by asking the NGOs to “share this as widely as possible to allow as many people as possible who still need to move to take advantage of the window.”

Per the information available, it appears the UN had been negotiating with Moscow for a more comprehensive humanitarian ceasefire in the area, but failed to secure anything more than Russian pledges not to hit these two roads for a few hours. Assad regime fighter jets nonetheless targeted the road to Saraqeb anyway, in the time between the sending of the email and the termination of the nominal deadline. Russian jets also hit a shelter for internally-displaced persons in the village of Jobas, close to Saraqeb and the M5 highway, killing at least eight civilians, five of them children.

The episode is an eloquent summary of the Russian mode of operating, and the UN’s effectiveness when it comes to Syria. The UN-linked organizations tasked with overseeing international peace appear entirely incapable of even issuing a public condemnation of behavior that disdains them themselves. Perhaps it was this that pushed OCHA not to declare Tuesday’s agreement with Russia openly, and to make do with a perfunctory email instead. After all, Russia has consistently violated every pledge and commitment and international law, and every understanding reached with the UN regarding Syria, including by intentionally targeting hospitals incorporated within the UN’s so-called “humanitarian deconfliction mechanism,” whereby OCHA shares hospitals’ coordinates with Syria’s warring parties, only for Russian and Assad regime aircraft to then go and bomb them.

The manner in which this latest agreement was announced—by an email written in English to organizations whose employees overwhelmingly speak Arabic and work in a country of Arabic-speakers—says volumes about how the UN and its institutions deal with the Syrian calamity. OCHA didn’t trouble itself to announce the agreement to the public, most likely because it knew the regime and its allies wouldn’t abide by it, almost as though it preferred to place the burden on the local organizations, who would bear responsibility for the agreement with whomever they informed of it. Moreover, the agreement shows that the UN knows well that Russia’s and Assad’s air forces prevent the convoys of displaced people from moving far, and can target any vehicle without the slightest care as to whether it is civilian or military, yet the UN is unable to do anything about this; unable even to condemn them publicly.

More importantly, even if one supposed the ceasefire were serious, it would still come extremely late, to the point of being near-meaningless, since the vast majority of residents of Ma’arrat al-Nu’man and its nearby villages have already been displaced in recent days. Before the start of the military campaign, around 100,000 people lived in Ma’arrat al-Nu’man, according to the city’s Local Council. By the time the UN’s email was sent this morning, fewer than 5,000 remained in the city, according to Al-Jumhuriya’s sources.

Tens of thousands, then, have been displaced from Ma’arrat al-Nu’man and its surrounding countryside within the last few days, in circumstances of utmost difficulty. Tens of thousands continue their displacement from dozens of towns and villages in southern Idlib Province and the fringes of Jabal al-Zawiya. The UN knows these facts well, yet is incapable not just of guaranteeing the wellbeing of those displaced on the roads, but also of securing their humanitarian needs, which are instead provided for by local NGOs of very modest capabilities, and networks of family support that have already been shattered by the war and harsh economic conditions.

The videos and pictures coming from southern Idlib Province at present are truly terrifying. Fighter jets, missiles, and artillery target everything in sight, including convoys of the displaced, having already demolished all of the area’s vital facilities in the past few weeks, rendering all hospitals, medical points, bakeries, and schools inoperative.

Following several rounds of destructive bombardment, Assad’s forces recently began their advance in Idlib’s southeastern countryside, taking over dozens of towns and villages to the east and south of Ma’arrat al-Nu’man, after battles with opposition and Islamist factions. Each of the towns and villages the regime entered was entirely vacated by its residents, who now roam around northwards and westwards seeking the outskirts of safer locales, many of them sleeping out in the open air under trees and in farmland, alongside the tens of thousands who preceded them a few months earlier when the regime took over Hama’s northern countryside and the town of Khan Shaykhun in south Idlib Province.

The scene in Syria today is one of an open war of displacement and extermination in broad daylight; one about which the world stays silent on the pretext that some of those fighting the regime are jihadists. As it happens, the residents of this area in particular have paid a heavier price than most in confronting these very jihadists. The city of Ma’arrat al-Nu’man itself waged a prolonged fight with the jihadists of Jabhat al-Nusra in 2016. Today it is being destroyed, and its residents displaced, in the name of eliminating the same Jabhat al-Nusra.

At the crest of this latest phase of displacement, the best the UN could do was claim to have secured safe passage for the displaced for a matter of hours. Yet it failed even to carry out this task. It has failed, in fact, at almost everything, succeeding only in bearing silent witness to a slaughter declared out loud.

[Editor’s note: This article was originally published in Arabic on 24 December, 2019]