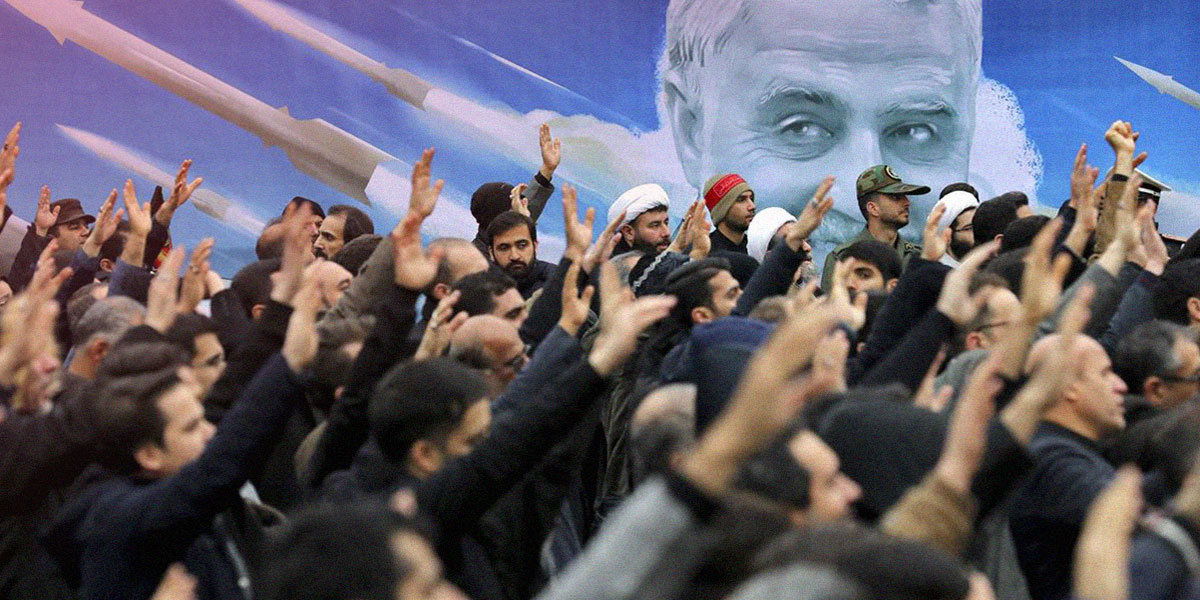 Soleimani in Syria: A legacy of death and devastation

Few individuals have caused as much sheer human suffering in Syria as Qassem Soleimani, the powerful Iranian warlord assassinated on Friday.

In many ways, the life of Qassem Soleimani—the immensely powerful Iranian operative killed by a US Reaper drone near Baghdad airport on 3 January—mirrored that of Iran’s Islamic Republic itself since its inception in 1979.

Making his name in 1982, in the Second Battle of Khorramshahr during Iran’s brutal war with Iraq, Soleimani narrowly escaped death after being gravely wounded, but survived to subsequently oversee the Revolutionary Guard brigades deployed along Iran’s border with Afghanistan. His knack for foreign entanglements was acknowledged in 1998 when Iran’s Supreme Leader Ali Khamenei appointed him commander of the Guard’s “Quds Force,” responsible for external operations.

The job placed Soleimani in direct contact with Iran’s proxy groups across the region, the most prominent of which at the time was Lebanon’s Hezbollah militia. Following the 9/11 attacks, several clandestine meetings took place between US officials and Iranian diplomats subordinate to Soleimani, in which de facto cooperation against the Taliban in Afghanistan was the subject of conversation. Soleimani’s experience with the latter country equipped him well for the role. While such direct channels between Washington and Tehran would soon dry up, it was to be Soleimani’s first taste of building complex understandings between the two capitals; understandings concerning not just Afghanistan but Iraq. In the wake of the 2003 invasion, these would eventually enable a reduction in attacks on US forces in Iraq’s Shia-majority areas, and the creation of an Iraqi Shia political class that was both loyal to Tehran and prepared to accept a US presence in the country; exemplified by former Prime Minister Nouri al-Maliki.

In the context of this relationship, Iran assisted US intelligence in hunting down the leaderships of al-Qaeda and the Taliban. It was, however, an unstable relationship, soured by US sanctions, political conflict, and intractable negotiations over Iran’s nuclear program. Nonetheless, a degree of minimum stability was maintained, allowing for Iran’s expansion within Iraq in exchange for silence about the US presence, and later the orderly withdrawal of Washington’s troops during President Barack Obama’s term.

Soleimani’s was a constant presence in these years; executing the Supreme Leader’s orders on the ground and managing Iran’s regional influence in general. As time went on, this influence was permitted by Washington to grow beyond Lebanese Hezbollah, such that Iraq fell firmly into Iran’s orbit—and Soleimani became one of the Middle East’s most powerful men.

The Arab Spring: An existential threat

In 2011, Soleimani was promoted to the rank of Major General. It was no accident that this came at the height of the Arab Spring, which the Iranian regime saw as an existential battle to preserve its regional power. The strategy conceived by Tehran to confront the threat of democratic revolution had Syria at its very center.

Following the outbreak of Syria’s uprising in the spring of 2011, Iran swiftly determined to stand by Bashar al-Assad and secure his dictatorship at all costs. The signs of Iranian intervention grew clearer as Assad’s regime neared collapse in 2012, and were openly visible by the first half of 2013, when Hezbollah fought in numerous critical battles in the Qalamoun mountain range and southwest Homs Province.

Not by coincidence, 2013 witnessed a number of major transformations in the Assad regime’s strategy for crushing the revolution. Military operations were expanded, and choking sieges were used to literally starve the residents of areas where military breakthroughs proved difficult—not merely as punishments, as in 2011 and 2012, but rather as part of a deliberate strategy to permanently alter the areas’ features. These “starve or surrender” sieges, as they were called in Arabic (al-joo’ aw al-rukoo’), were accompanied by incessant bombardment from both ground and air. The winter of 2013-14 saw deaths by malnutrition in the Damascus suburbs of Ghouta and Yarmouk, and famine pervaded the besieged districts in general. These developments were intimately linked to the growing Iranian influence across the country.

At the same time, as Iran’s man in Syria, Soleimani was also responsible for re-structuring the forces fighting on Assad’s behalf. Under Soleimani’s direction, new sectarian militias were created and trained in parallel with the regime’s army, which was deemed unfit for the task. Alongside Hezbollah, these militias would become Iran’s principal ground forces in the fight against Assad’s opponents.

In parallel with the creation of these so-called “National Defense” militias—as well as others with explicitly sectarian identities, such as the Abu al-Fadl al-Abbas Brigades—Soleimani also procured Iraqi militias to fight in Syria. Over time, mercenaries from states as far away as Afghanistan and Pakistan were brought over to join the fray, some of them children as young as 14.

By 2015, Soleimani may have saved Assad’s regime from collapse, but he had not yet altered the balance of power decisively in Damascus’ favor. Large swathes of Syrian territory remained in the hands of opposition factions, or else under the control of the Islamic State or similar jihadists. The solution lay in the ally shared by Assad and Iran: Vladimir Putin, who had already played a key role in sheltering Damascus diplomatically at the UN Security Council, blocking any and all resolutions which could conceivably lead to meaningful action by the international community against the regime.

Accordingly, Soleimani flew in person to Moscow in July 2015 to “put the map of Syria on the table” before his Russian hosts and explain how, with their air power, the war could be won. Putin was convinced, according to officials quoted by Reuters. “Okay, we will intervene,” he said. “Send Qassem Soleimani.”

It was yet another triumph for the Quds Force commander. Russian fighter jets duly commenced a ferocious bombardment campaign, wreaking unfathomable destruction in East Aleppo, Ghouta, and wherever else their shadows fell, swinging the military pendulum firmly in the regime’s favor, especially after the fall of opposition-held Aleppo in late 2016.

In a rare interview with Iranian state TV just weeks before his death, Soleimani spoke of the 2006 war between Israel and Lebanon’s Hezbollah, asserting there was an Israeli plot to forcibly displace south Lebanon’s Shia population, altering the country’s demography so as to eliminate the threat posed by Hezbollah to Israel. By his own account, Soleimani was a key player in the 2006 war, ultimately foiling this Israeli conspiracy to displace the Shia of the South.

Exactly ten years on from that war, social media accounts linked to Iran’s militias in Syria posted photos of Soleimani strolling the streets of East Aleppo after its bloody re-occupation by the regime; photos documenting that that same Soleimani was responsible for the forced displacement of Aleppo’s population, and for altering the city’s demography so as to preserve Iran’s power in Syria and the wider region. 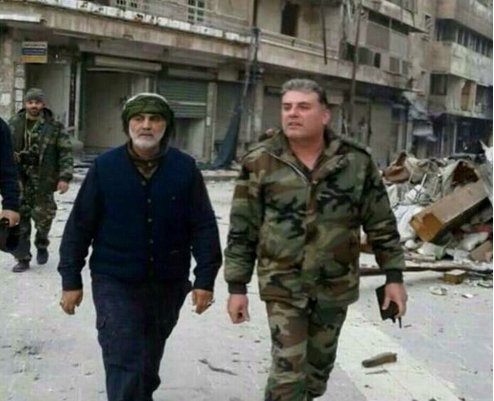 The photos were by no means the first of Soleimani in Syria. Since 2015, he had been seen on various frontlines in southern Aleppo Province, where Iran-backed foreign militias continue to enjoy considerable influence to this day. Elsewhere, he appeared in northern Latakia Province in 2015, as well as northern Hama Province in 2017. Media reports suggested he had directly overseen numerous battles in south Syria; a suggestion confirmed in a video clip published by the pro-regime Al Mayadeen TV after his death. He was also seen multiple times in eastern Deir al-Zor Province following regime advances in the area, which Iran deemed vital for its broader regional ambitions, given its proximity to the Iraqi border. It was here that he made his final appearance on film, in July 2019, visiting the town of Al Bukamal, where reports said he was preparing for a potential confrontation with the US. His additional excursions around Syria not captured on camera were innumerable; there was no shortage of symbolism in the fact he was killed while journeying to Baghdad from Damascus.

For years throughout this final period of his life, Soleimani managed a complicated relationship between militias fully loyal to the Iranian regime, on the one hand, and on the other hand a weak government also dependent on Tehran in its turn. Indeed, managing such relationships between powerful militias and weak governments was the essence of Soleimani’s strategy across the region. As for the civilians killed by his forces’ fire, or starved at the hands of his allies, or expelled from their homes with no chance of return, they were merely the collateral damage of Iran’s plans for Syria and the wider Middle East.

Soleimani’s death does not, of course, bring an end to those plans, or to Iranian influence in Syria, though it may herald the beginning of an end. By the same token, while his demise is not sufficient retribution—nor does it provide his victims justice—it has nonetheless offered a modicum of breathing space, even cheer, to the survivors of the hellfire, death, and devastation of which he was among the chief architects.

[Editor’s note: This article was originally published in Arabic on 6 January, 2020.]